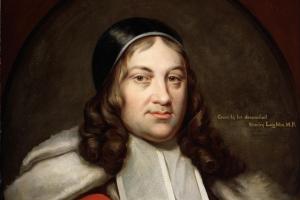 Charlton’s father, a thriving London goldsmith, claimed descent from a Shropshire gentry family which dated from the 13th century and had represented the county under Mary Tudor. He acquired Ludford, just outside Ludlow across the Teme, in 1607. As one of the farmers of the crown right of pre-emption on tin in Devon and Cornwall, he advanced £3,843 to Charles I in 1643, and after the Civil War he was obliged to pay £720 to the committee for the advance of money; but he was not an active Royalist, and in 1653 he was able to enlarge his estate by the purchase of Whitton Court for £3,700.3

Charlton himself was named after his uncle Sir Job Harby, one of Charles I’s customs farmers. He became a lawyer and an alderman of Ludlow, for which he was first returned to Richard Cromwell’s Parliament. After its dissolution he assisted Andrew Newport in preparing for a royalist revolt in Shropshire. Re-elected in 1660, he was one of the leaders of the royalist junto in the early days of the Convention and a very active Member throughout. He was named to 82 committees, in six of which he took the chair, and made 35 recorded speeches. Before the Restoration he was appointed to the committee of elections and privileges, the drafting committee, and those to prepare an answer to the King’s letter, and to consider the indemnity bill, in the passage of which he played an important part. He was ‘very violent’ against Sir Anthony Ashley Cooper as a Cromwellian, seconding the motion to except all who had served in the high courts of justice, and desired to extend the proviso to those who had petitioned against Charles I, or sat in the Rump, abjured, contrived the Instrument of Government, or imposed taxation under the Protectorate, together with major-generals and decimators. ‘He never pressed for the death of any, yet to serve the future peace of the nation he could not be silent.’ On individual offenders, however, he spoke ‘but moderately’ against his fellow-lawyer Bulstrode Whitelocke† and altogether opposed excepting the Salopian Richard Salwey. He took the chair of the committee to report amendments to the bill, and supported the proposal to oblige Protectorate office-holders to refund their salaries, though he admitted that the proviso might require amendment. He was chairman of the grand committees for religion and for tunnage and poundage. When the ejection of scandalous ministers was discussed he ‘hoped the House would not be more cruel than Henry VIII, who allowed maintenance for their lives’; but he insisted on conformity, and from the committee on settling ministers reported a proviso to the bill imposing penalties for recalcitrance. These high matters did not prevent him from steering through committee a local charity bill to establish a hospital at Newport. His uncle wrote proudly:

His services were rewarded with the coif at the first call of the reign. Wharton sent him the case for modified episcopacy with objections and answers, and after the recess he was among those appointed to bring in a bill to give statutory effect to the Worcester House declaration. He spoke repeatedly for expediting the militia bill. He supported the grant of excise rather than a land tax as compensation for the abolition of the court of wards, and took the chair in the committee to draft clauses accordingly. On the post office bill on 15 Dec. he argued for ‘letters to all Members of Parliament to go free during their sitting’.4

Charlton was re-elected in 1661 and listed by Lord Wharton as a friend, despite his resolute Anglicanism. Again very active in the Cavalier Parliament, he was appointed to 266 committees, taking the chair in seven of them, managed seven conferences with the Lords and made 31 reported speeches. He was in the chair of the elections committee for the first nine sessions, and twice acted as chairman of ways and means. In 1661 he was appointed to the committees for the security, uniformity and corporations bills, the bill of pains and penalties, and the bill for the execution of those under attainder. He was sent to ask Bruno Ryves, formerly chaplain to Charles I to preach on the unseasonable weather ‘showing how the neglect of exacting justice on ... the old King’s murderers ... was a main cause of God’s punishing a land’. He reported on the Lords’ amendments to the corporations bill on 30 Apr. 1662, and also took the chair for the militia bill. He was rewarded with the much-coveted post of chief justice of Chester, and given an additional £500 p.a. in 1664 ‘in order to his support and for his services’.His father’s claims on the crown were settled by a payment of £3,700 Listed as a court dependant, he is said to have played a leading part in the repeal of the Triennial Act, and chaired the conventicles bill. In the Oxford session he was appointed to the committee for the five mile bill, and spoke in its favour. Andrew Marvell, in his account of the court party in 1666, wrote:

Charlton advances next, whose coif does awe
The mitre troop, and with his looks give law.
He marched with beaver cocked of bishop’s brim,
And hid much fraud under an aspect grim.

When John Ashburnham I was charged with receiving a bribe from the French merchants, Charlton said they ‘were like the devil, both tempters and accusers’. In November 1667 he defended Clarendon, saying: ‘I know not one precedent where words or intentions were treason at common law, for they are not treason where no act follows’; but he took the chair of the committee on the banishment bill. He was listed among the court supporters as a friend of Ormonde, and he supported the attempt to impeach the Earl of Orrery (Roger Boyle) in November 1669. He was in the chair on a supply bill on 8 Dec. 1670, when he suggested ’we might read the order by which we had enlarged the time twice already and we might make this third enlargement in the same terms, which was agreed to. When Parliament was to meet again in 1673 after repeated prorogations, the Privy Council decided that Charlton should be chosen Speaker, though Robert Milward feared ’his zeal to run with his own opinion against the King’s measures’. He was proposed to the House by Henry Coventry as a

very fitting person in respect of his experience in the order of the House, and long service to his Majesty; which choice was immediately assented to, without any contradiction or dispute.

Only ten days later Charlton fell ill. The House had to adjourn, and he resigned. This may have been a diplomatic illness since he had been faced with parliamentary storms over the Declaration of Indulgence and the issue of writs by Lord Chancellor Shaftesbury without the warrant of the House.He was given £1,000 from secret service money by (Sir) Stephen Fox ‘for quitting the chair’. After this, Charlton ceased to take a leading part in the proceedings of the Commons though he was named on the Paston list and sent the government whip in 1675 in a personal letter from Coventry. He was listed as an official and a government speaker in that year, and was classed as ‘thrice vile’ by Shaftesbury in 1677. In the debates on making alliances to reduce the power of France in that year, Charlton was derided by William, Lord Cavendish, for declaring that ‘if the King were a Mahommedan, we ought to obey him’. The only committee of importance to which he was appointed under the Danby administration was on the bill for preserving the liberty of the subject on 3 Mar. 1678. On 18 June following, Grey reported, Charlton supported the grant of an additional £300,000 to the King, saying ‘the King denies you no bills you present him, only le Roi s’avisera. And I would not have you do anything indecent to the King. The speech was interrupted by laughter in the House. In November he was one of the Welsh judges reflected on in the House for not bringing priests and Jesuits to trial, whereupon Silius Titus remarked

I believe the character that is given of Sir Job, that he is a good Protestant, but ... Sir Job is a gentleman of the long robe and did desire to be in a better condition than he was, and as things were like to be, this is the way to rise, not to persecute that party.

He was classed as a court supporter in both the court and opposition lists of 1678.5

In 1680 the King decided to replace Charlton as chief justice of Chester by Sir George Jeffreys, who had lost his post of recorder of London for opposing exclusion. Roger North wrote that Jeffreys

laid his eye on the place of chief justice of Chester which was full of Sir Job Charlton, than whom there was not a person better qualified for his Majesty’s favour; an old Cavalier, loyal, learned, grave and wise. He had a considerable estate towards Wales and desired to die in that employment. But Jeffreys, with his interest on the side of the Duke of York, pressed the King so hard that he could not stand it, but Sir Job Charlton must be a judge of the common pleas and Jeffreys at Chester in his place. ... Sir Job laid this heavily upon his heart and desired only that he might speak to the King and receive his pleasure from his own mouth, but was diverted as a thing determined. But once he went to Whitehall and placed himself where the King, returning from his walk into St. James’s Park, must pass, and there he set him down like a hermit poor. When the King came in and saw him at a distance, sitting where he was to pass, concluded he intended to speak with him, which he could not by any means bear: he therefore turned short off and went another way. Sir Job seeing that, pitied his poor master, and never thought of troubling him more but buckled to his business in the common pleas. And may Westminster hall never know a worse judge than he was.

Six years later, Charlton was removed from the common pleas for giving his opinion against the dispensing power, but he remained on good terms with James II, who restored him to his old place at Chester and stayed with him at Ludford in 1687. He was finally dismissed from office after the Revolution, presumably as a non-juror. The list of East India stockholders at this time shows him as probably the largest investor outside the London merchant community, with a holding of £5,350. He died on 24 May 1697, aged 83, and was buried at Ludford.6