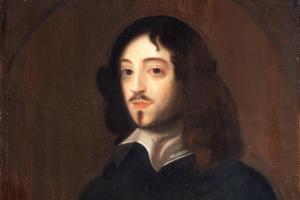 Whitelocke was born in 1605 at the Fleet Street house of his great-uncle Sir George Croke, brother of Sir John Croke*. His father, James Whitelocke*, was, like Sir George Croke, a rising barrister who became a judge. At his baptism (19 Aug.), the minister of St. Dunstan-in-the-West was reluctant to christen him Bulstrode, whereupon Whitelocke’s uncle remarked that as the boy was to be named after his mother the minister could choose either Bulstrode or Elizabeth.34

Whitelocke was seven when he was first sent to school, and spent a brief spell as a boarder when his father was imprisoned in the Fleet. At the age of ten he attended Eton, where his father was steward and counsel, and in 1616 he was sent to Merchant Taylors’ school, where his father had been a pupil.35 On 9 Aug. 1619 he was admitted to the Middle Temple during his father’s readership. Although assigned chambers the following June, he seems to have continued his schooling until he was packed off to his father’s alma mater, St. John’s College, Oxford, where he matriculated on 8 Dec. 1620.36 At Oxford Whitelocke was commended to the care of William Laud, then president of St. John’s and an old university friend of Whitelocke’s father. It was intended that he should take his BA, but he sprained his leg and returned to London. When he recovered he began keeping commons at the Middle Temple and so started to study law. He also began to follow the assize circuits, both as part of his legal education and to improve his knowledge of England, and to act as a law reporter in the Westminster courts.37

Whitelocke considered his election to Parliament in 1626 as a further stage in his education, and indeed he called Parliament ‘the best school of Christendom’. His father arranged for him to be returned at Stafford though the influence of his friend Matthew Cradock*, recorder of Stafford and clerk of the assize for the Oxford circuit, on which Sir James served as judge. Whitelocke also claimed that he was returned for Boroughbridge on the interest of (Sir) Humphrey May*, the chancellor of the duchy of Lancaster and an old friend of his father’s, and that, on the advice of Sir James, he waived his election in favour of the Stafford seat. However there is no evidence that Whitelocke was formally returned for Boroughbridge, which held its election 13 days before Stafford. It is possible that Whitelocke contested Boroughbridge but lost.38

During the Parliament Whitelocke kept a diary, which is now in Cambridge University Library. It consists of three small papers books, each of which would have fitted neatly into Whitelocke’s lap. Parts of the diary contain numerous corrections, suggesting notes taken during debate, while other passages are more fairly written, perhaps indicating copies of proceedings taken from another diarist.39 However, only once, on 1 June, did Whitelocke state that he was absent.40 Although the diary has been published, it contains two passages of, as yet, undeciphered shorthand. The first, less than a page in length, occurs at the end of his account of proceedings on 28 Mar., while a further 3¾ pages follows his account of the conference on 10 May.41 Whitelocke’s decision to keep a diary was, perhaps, a logical extension of his previous experience of law reporting. Indeed, noting debates was a normal part of a young lawyer’s education. Whitelocke took care to record procedural matters, for example noting that the appointment of the committee of privileges was customarily the first business of a session.42 He recorded more days’ proceedings than any other diarist of the second Caroline Parliament, and was careful to note the progress of bills. However, other diarists with greater experience of Parliament frequently give fuller accounts of debate than Whitelocke.

Despite the disapproval of his father, Whitelocke sat in the gallery, which was considered the ‘resort of mutineers’. He subsequently recorded that he seldom gave his vote with the Court, and that he was ‘neither swayed by Court flattery, nor by popular vanity’.43 According to his memoirs he spoke twice, both times in relation to words allegedly uttered by fellow Members (Sir Dudley Digges and Clement Coke). Being ‘so young a Parliament man’ he found the experience daunting, and had to screw up his ‘courage’ to do ‘as all the rest did’ in ‘the great and ruffling Parliament’. However, a certain amount of confusion seems to have crept into Whitelocke’s memory of the 1626 Parliament. On 13 May the Commons certainly resolved that its Members should individually protest that they had not heard Digges utter certain words during the presentation of the articles against Buckingham. However, there is no contemporary evidence that Members were required to make a similar protestation concerning the words spoken by Coke on 10 March.44

Despite the crisis created by the attempted impeachment of Buckingham, Whitelocke evidently expected Parliament to come to agreement and produce a crop of legislation. In a letter written shortly after the dissolution, he stated that having transmitted the articles against Buckingham to the Lords and secured the release of Digges and Eliot, the Commons ‘proceeded with great diligence for the consummation of their ordinary businesses as making of laws, and preparing their grievances to be presented to the king to the end there might be a speedy and happy conclusion which was much hoped for and verily expected’. However, the Commons had been diverted by the news of Buckingham’s election as chancellor of Cambridge University, and he attributed the sudden dissolution to the Commons’ subsequent outcry. After reporting that Buckingham was to be proceeded against in Star Chamber so as to allow him to clear his name, Whitelocke commented that ‘I wish that we may suffer according to our merit here though not hereafter’.45

Whitelocke was called to the bar in November 1626. Sometime before the 1628 Parliament was summoned, he wrote to Cradock asking to be recommended to the burgesses of Stafford in the event of a fresh meeting. However, he was aware that his overture might not be well received, as he felt obliged to explain why he had had not kept his constituents better informed in 1626. Declaring that he was ‘most sure I did them no disservice wittingly’, he added that he had ‘not such particular acquaintance with any of them as to write unto them’. However, he offered not to stand if Cradock himself wanted the seat. In the event Cradock did sit, and there is no evidence that Whitelocke sought election elsewhere.46

In late 1628 the students of the Middle Temple appointed Whitelocke master and treasurer of their Christmas revels, during the course of which, in parody of Buckingham’s impeachment, he was accused by his fellows of ‘misemployment of the public treasure’ and of holding a ‘multiplicity of offices’. According to his memoirs, he made a ‘solemn speech’ refuting all the charges. However, perhaps as a result of his involvement in the revels, he had fallen heavily into debt. In order to clear what he owed he started to practise law for the first time. Thanks to his father’s position as a justice of King’s Bench, he initially did very well, for by 1631-2 his annual income from his legal practice was over £300.47

In June 1630 Whitelocke married Rebecca Bennet, the niece of his father’s old friend Sir Humphrey May, a connection which ‘made the proposal better liked’, as did the lady’s portion of £3,000. They were married in the chapel of his mother-in-law’s country house at Mortlake. However, even before the marriage Rebecca showed signs of mental illness, and soon she became ‘exceeding ill, deprived of her senses and reason’. Although she recovered sufficiently to go forward with the ceremony she suffered a relapse in the evening. They had only one child, Whitelocke’s eldest son James, who was born on 13 July 1631.48

In 1632 Whitelocke was appointed recorder of Abingdon and became counsel for the town of Henley. In March 1633 he was added to the Oxfordshire bench due to the support of Sir George Croke and (Sir) William Jones I*. The following June his father died, leaving him the manor of Fawley, on the Buckinghamshire/Oxfordshire border, and a personal estate of £4,500. Whitelocke initially thought that his inheritance would enable him to abandon the law, but on the advice of Laud he continued with his profession. In the absence of his father his annual income fell to only £50, and consequently he sought appointment as a master of Requests, but without success.49

In the spring of 1634 Rebecca suffered another, more serious bout of illness, and was committed to the care of Dr. Bartlett, who insisted that neither Whitelocke nor her mother should see her for five or six months. Whitelocke subsequently went to Paris, but in his absence his mother-in-law gained access to her daughter, worsening her condition. She refused food for 12 days and died on 9 May.50

After returning to England, Whitelocke was advised to remarry by one of his father’s old servants, who said he needed a wife to look after his household and ensure his goods were not embezzled. He suggested Frances Willoughby, then living with her aunt, the countess of Sunderland, at Hambledon, not far from Fawley. Soon thereafter Whitelocke visited the countess, but though he initially had little interest in marriage he felt strongly attracted to Frances, and began to court her in earnest. The countess approved, but Frances’ brother, Francis, 5th Lord Willoughby of Parham, and her trustee, the 7th earl of Rutland (Sir George Manners*), forbade the courtship. On 10 Nov. 1634 Whitelocke met Frances by prearrangement in his coach in a field near Hambledon and brought her back to Fawley Court, where they were married in his chapel. At first Willoughby refused to recognize the marriage, but Frances’ mother was persuaded to accept it by Bishop Williams, an old friend of Whitelocke’s father. Willoughby and Rutland were eventually brought round by Whitelocke’s friend, Edward Hyde†.51

In 1634 Whitelocke was summoned before the Privy Council for failing to punish puritans in Abingdon who refused to conform to the ceremonies of the Church of England, but he escaped censure thanks to the earl of Holland (Henry Rich*), Abingdon’s high steward and a known puritan sympathizer.52 Whitelocke unsuccessfully stood for election to the Short Parliament at Abingdon, and was elected to the Long Parliament for Great Marlow.53 He rose to high office in the Commonwealth and Protectorate, but his government career ended at the Restoration, although he seems to have remained high steward of Reading until the early 1670s. Elias Ashmole recorded that Whitelocke died at six in the morning on 28 July 1675. His will, written on 17 May 1675, was proved on 10 Nov. 1676 by his widow, his third wife, Mary. There are portraits of Whitelocke in the National Portrait Gallery and St. John’s College, Oxford.54