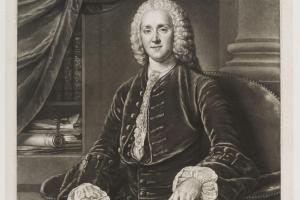 George Grenville was brought into Parliament by his uncle, Lord Cobham. Like his elder brother, Richard, he was a member of the political group known as ‘Cobham’s Cubs’. Making his first reported speech in support of Pulteney’s motion for a secret committee to inquire into the conduct of the war, 21 Jan. 1742, he was one of the opposition Members elected by the Commons to a commission of seven appointed to inquire into the public accounts at £1,000 a year each under a bill which was thrown out by the Lords.1 In the next session he spoke against the Hanoverians, 10 Dec. 1742. One of the signatories of the opposition whip of 10 Nov. 1743,2 he spoke on the address against the retention of the Hanoverians in British pay, 6 Dec. 1743; introduced a motion against the continental war, 15 Dec.; spoke against the vote for the British forces in Flanders, 11 Jan. 1744; opposed the suspension of the Habeas Corpus Act during the crisis caused by a threatened French invasion, 28 Feb.; attacked an extraordinary payment to the Queen of Hungary, 13 Mar.; and supported a vote of censure, 10 Apr. When the opposition leaders came to terms with the Pelhams at the end of 1744, he obtained a seat on the Admiralty board, which did not prevent him, in his own words, from engaging with Pitt ‘in opposing the measures of Government’ during the Forty-five rebellion. Going out with the Pelhams in February 1746, he was so aggrieved at being passed over for promotion on their return to office that he tendered his resignation to Pelham, who persuaded him to withdraw it on the understanding that he should be ‘the next to go into the Treasury’. The promise was carried out next year, but he was again aggrieved at not succeeding to the post of treasurer of the navy, vacated by Dodington’s resignation in 1749. Though externally a docile member of the Cobham group, his ‘narrative’ shows him to have been seething with suppressed grievances against its other members, especially Pitt, of whom he writes:

During all this time I still continued giving my support to Mr. Pitt, notwithstanding the many public proofs I received of his indifference, coldness, and slight of every wish and opinion of mine, in the midst of the nearest intercourse and of the strongest professions of friendship.

Thus I continued in the same office till Mr. Pelham’s death in 1754, giving what support I was able to those who never gave any to me.3

Horace Walpole describes him as prolix, pedantic, deceitful, and even less of a gentleman than his elder brother, Richard.4