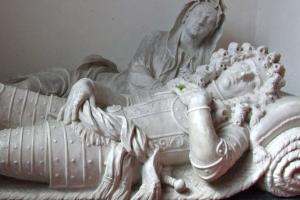 Winwood’s immediate ancestors were living in Northamptonshire by the middle of the 16th century. His father, a staunch Protestant, became secretary of state in 1614, sat for Buckingham in the Addled Parliament, and bought Quainton in 1615. Winwood inherited lands in Buckinghamshire worth over £1,500 p.a., including Ditton Park, two miles from Windsor, which he represented in the Long Parliament until Pride’s Purge.4

Winwood stood again on the inhabitant franchise in 1660, but his opponents were seated on the merits of the return, and he does not seem to have pursued his claim. He was unsuccessful for Buckinghamshire at the general election of 1661. Although he conformed to the Church of England, he may have continued to hold Presbyterian views, for he congratulated his brother-in-law, the 2nd Lord Montagu of Boughton, on taking into his family an ejected Presbyterian minister, whom he described as the son of an ‘old and very good friend’.5

On 31 Jan. 1679 Lord Wharton wrote that, given timely notice, he thought he could engage Winwood to stand with his son Thomas for Buckinghamshire, and it was not until 20 Feb. that he declared his candidature of Windsor, apparently without Shaftesbury’s knowledge. He was seated in the first Exclusion Parliament on petition, the House having set aside the return by the corporation in favour of an inhabitant franchise, and voted for exclusion. After a double return in the second election of 1679, he was removed from local office. When Parliament met, he again petitioned and was declared elected after the House had altered the franchise to scot and lot payers only, and he was apparently unopposed in 1681. He made no speeches and served on no committees in any of the Exclusion Parliaments, and is not known to have stood again. Presumably a Whig collaborator, he was restored to the lieutenancy in February 1688, but he did not live to see the Revolution. Clearly a wealthy man, he held shares in the New River Waterworks, owned land in Norfolk and Suffolk as well as Buckinghamshire, and provided for the erection of almshouses at Quainton. He died on 28 June 1688 and was buried at Quainton, his estates eventually passing to his nephew, Ralph Montagu*.6