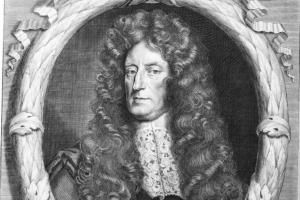 Only a small portion of L’Estrange’s colourful career was devoted to parliamentary politics. A younger son of an ancient Norfolk family, conspicuous both for its loyal sufferings and its literary tastes, he first fought for the Stuarts in the Bishops’ wars. He was sentenced to death by John Mylles at a court-martial in 1643 for attempting to seize King’s Lynn, and played a prominent part in Kent in the second Civil War. In exile he took service for a time in a cardinal’s household, where his musical talents were appreciated but his devotion to his Church could not be shaken. He was pardoned by the Protector in 1653, and lived for the next few years in such style that some believed him to have also been granted a pension. He began his career as a pamphleteer with an attack on the military regime and their London allies in December 1659, and after the Restoration complained bitterly of the neglect of loyal Cavaliers by the Court. He was appointed surveyor of the press in 1662, and confirmed in office by Sir Henry Bennet under the Press Act in the following year. His post carried no salary, but gave him powers of search and censorship with the sole right to publish ‘narratives’ not exceeding two sheets of paper. He thus supplanted (Sir) John Berkenhead as the chief government propagandist. He could not equal his predecessor in learning, grace, wit or dignity, but he far surpassed him in virulence, especially directed against the nonconformists, who retaliated, so far as they were able, by styling him ‘the dog Towser’, a monster of profanity, drunkenness, and depravity. His reporting of the second Dutch war failed to satisfy the Court, and in 1665 his news-books were superseded by the foundation of the Gazetteunder the editorship of Joseph Williamson. L’Estrange was compensated with a pension of £300, which he was required to earn by tracking down the authors and printers of seditious libels. In this task, which involved him in a prolonged dispute with the Stationers’ Company, he enjoyed very little success, and he lost office when the Press Act expired in May 1679.3

L’Estrange was the first to publish even a whisper of doubt about the wilder aspects of the Popish Plot, and was accused by one of Oates’s crazier satellites not only of attempting to corrupt a witness, but also of the obligatory charge of Popery. The accusation was dismissed by the Privy Council, ‘His Majesty speaking very well of him’; but when the second Exclusion Parliament met the House of Lords recommended his removal from the commission of the peace, and he fled abroad. He returned early in 1681, and began to publish The Observator, which perhaps did more than any other news-sheet to turn the tide against the exclusionists and win the propaganda battle for the Court. In particular he devoted himself to the exposure of Oates’s fabrications. His post as surveyor of the press was revived in 1684, and he was rewarded by James II with a knighthood. At the general election of 1685 he was recommended as court candidate for Winchester by the Roman Catholic recorder, Bernard Howard, and returned without a contest when two local Tories were persuaded to withdraw. A moderately active Member, he was appointed to nine committees, including the committee of elections and privileges, and those to recommend expunctions from the Journals (a congenial task for a censor) and to consider the bills for regulating hackney coaches and providing carriages for the navy and ordnance. Although he defended the Declaration of Indulgence in 1687, the King was persuaded to offer him as a sacrifice to nonconformist hatred, and his news-sheet was suppressed. During the Revolution he was arrested on a charge of ‘writing and dispersing treasonable papers’, he was excluded from the Act of Indemnity in 1690, and twice taken into custody by the new regime. A non-juror, he supported himself by his pen, though his wife gambled away much of his earnings, and he required assistance from his great-nephew, Sir Hamon L’Estrange. His last years were saddened by the conversion of his daughter to the Church of Rome. He died on 12 Dec. 1704 and was buried at St. Giles in the Fields. His only son died unmarried a few months later without entering Parliament.4

This biography is based on G. Kitchin, Sir Roger L’Estrange.