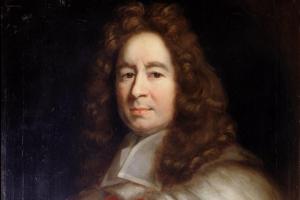 Gregory came from a minor gentry family settled in Herefordshire since the beginning of the century. A virulent account (in a private letter written shortly after he became recorder of Gloucester many years later) describes him as left virtually penniless on his father’s death, and forced to enter the service of a local committeeman, the grandfather of Sir John Kyrle. He then served as one of the clerks to the county committee before qualifying as a barrister. His fortune was founded on the stewardship of the Devereux estates, but his employment by the royalist Lady Hertford in this capacity did not prevent him from deputizing for the regicide Major-General Harrison as steward of Hereford. Nevertheless he voiced the demand for a poll in opposition to the court candidates in the 1656 election.3

Gregory’s practice throve after the Restoration, and he became an extensive purchaser of land, acquiring How Caple in 1677. He first stood for Weobley in 1675 as the candidate of the country party, probably on the strength of his marital connexion with the Tomkyns family. He feared ‘nothing so much as foul play from the sheriff’, which duly occurred. His petition was delayed by the culprit’s death, and meanwhile he was selected as country party candidate for Hereford, where he remained a member of the corporation. However, the Weobley election was declared void on 22 Feb. 1678, and Gregory was successful at the second attempt. Listed by Shaftesbury as ‘doubly worthy’, he was an active Member in the last nine months of the Cavalier Parliament, serving on 30 committees and making five speeches. He was one of the Members appointed to draw up reasons for a conference on the growth of Popery. He seconded the motion for an address for the removal of counsellors, and helped to draw it up. In the autumn session he was active over the Popish Plot. He served on the committee of inquiry, and took part in preparing the impeachment of Lord Arundell of Wardour, and (with three other Members, all strong opponents of the Court) the examination of Samuel Atkins, by which it was hoped to implicate Samuel Pepys in the plot. He was appointed to the committee for excluding Papists from Parliament and to prepare reasons for disagreeing with the Lords’ amendments to the bill. He was deeply concerned about the Roman Catholic officers in the army, reading to the House the dispensations granted to them by Secretary Williamson and taking part in the preparation of instructions for disbandment and devising punishments for recusants who accepted commissions. He helped to draw up the address on the present dangers of the nation, and was appointed to the committee of secrecy on 14 Dec. 1678.4

Gregory was re-elected to the first Exclusion Parliament and noted as ‘worthy’ on Shaftesbury’s list. After some days of deadlock between King and Commons over the choice of a Speaker, he was proposed as a compromise candidate by the Hon. William Russell and William Cavendish, Lord Cavendish, and accepted, in spite of his plea of inexperience. Gregory was not a forceful Speaker; Oates’s impertinence to the House was far more effectively rebuked by back-benchers like Sir Robert Southwell, and Sir Richard Wiseman replied to his questions ‘rudely and surlily’. Gregory was chiefly anxious to expedite the disbandment of the army, and to facilitate this he lent himself to a court manoeuvre to carry up the supply bill to the Lords on a mere motion, without vote or debate, for which he was blamed by John Trenchard. Gregory’s elevation to the judicial bench had been pressed by the preceding Speaker, Edward Seymour; but although there had been a vacancy at the Exchequer since the death of Timothy Littleton in March, Gregory was not appointed to fill it till after the dissolution, thus disappointing Seymour’s expectations of returning to the Speaker’s chairs.5

Although no longer eligible for the Commons, Gregory remained an active politician locally, much valued by the country party for his influence on Lord Scudamore John Scudamore). He thought it necessary, however, to re-insure himself with the Court, and he probably played some part, as was later alleged, in the surrender of Hereford’s charter. He brought up the Herefordshire address against associations: ‘The reason is said to be fear he should be removed, of which there has been strong report’. However, he remained in office for four years more, until dismissed by James II for declaring against the suspending and dispensing powers.

Gregory took a prominent part in organizing a loan in Herefordshire to William of Orange in December 1688, himself subscribing £30, and was returned for Hereford in the following month, despite some ‘particular piques’ the inhabitants had conceived against him. On the Ailesbury list he is recorded as voting to agree with the Lords that the throne was not vacant. A moderately active Member of the Convention in its opening months, he was appointed to seven committees, including those to amend the Lords’ version of the declaration of rights, to suspend habeas corpus, to draw up new oaths of allegiance and supremacy, and to abolish the court of the marches. On 7 Mar. 1689 he opposed the motion for restoring corporations to their condition in 1660 by reminding the House that at that time ‘the loyal nobility, gentry and commons were out of the magistracy’. Promoted to the King’s bench shortly afterwards, he distinguished himself as one of the two judges who supported the opinion of Sir John Holt that the surrender of the charters was neither illegal nor treasonable, whereupon a Whig peer alleged that Gregory ‘in the very beginning had been most forward and active in procuring the surrender of Hereford’. When holding the assizes at Bristol in 1691 he was insulted by the Tory mob at the instigation of John Knight II. He died in London on 28 May 1696, and was buried at How Caple, the only member of his family to sit in Parliament.6