Home About the History of Parliament > Staff > Dr Martin Spychal 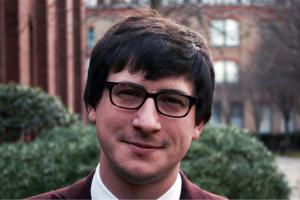 I joined the History of Parliament as a research fellow on the 1832 – 1945 project in January 2016. I am currently researching biographies of MPs and constituencies in London, Devonshire, Cornwall and Scotland. I have previously completed work on MPs and constituencies in Northamptonshire and Dorset. I co-ordinate the History of Parliament's university engagement programme.

I completed my PhD at the Institute of Historical Research in 2017. My first monograph, Mapping the State: geography, representation and the 1832 Reform Act, is forthcoming in the Royal Historical Society's New Historical Perspectives series. Offering a major reassessment of the 1832 Reform Act, my book provides the first sustained analysis of the reconstruction of England’s electoral map in 1832 and its impact on politics at Westminster and in the constituencies.

My research interests include:
• the evolution of the political nation and its significance to modern British society and culture

• the electoral and non-electoral impact of the 1832 Reform Act, and the evolution of Britain’s electoral map to the present day

• the networks of power and legislation that developed around political, professional and social institutions in nineteenth-century Britain

My papers and publications include:

– Book Review, E. Gillin, The Victorian Palace of Science: Scientific Knowledge and the Building of the Houses of Parliament, Parliamentary History, 38 (2019), 303-5;

– 'Resisting corruption through science: the ‘spirit of inquiry’ and the establishment of the 1831-2 boundary commission', From “Old Corruption” to the New Corruption?, Oxford, January 2019;

– ‘‘the county-mongering clause’: The Times, the division of counties and the 1832 Reform Act’, Politics Before Democracy Conference, UEA, Norwich, April 2014;

My Victorian Commons and History of Parliament blog posts:

- ‘The queen and the chemist’s son: Matthew Wood MP and the radical defence of Queen Caroline’, July 2020

– ‘William Tooke and the royal charters of the University of London’, August 2019

– 'Science, parliamentary inquiry and the Whig decade of reform', February 2019

– ‘So much for the behaviour of the first assemblage of gentlemen’: views from parliament by a Devonshire Tory’, August 2018

Researcher for Anthony Blunt: A Question of Retribution?, BBC Radio 4 (2020)