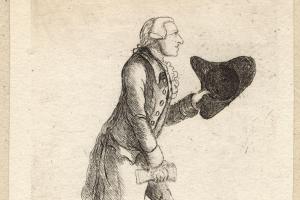 Cavendish, a founder member of the Whig Club, was not expected to return to public affairs after his disgust at being defeated in 1784. He might have stood for York again and he had no objection to his name being used; on 18 Nov. 1787, however, he informed his friend Earl Fitzwilliam, ‘If I can I will keep quite out of Parliament, but if old George will not come in again, I am afraid I cannot avoid serving for Derby’. On 17 Mar 1789 he again turned down York, ‘even if I came in quietly’, adding:

My first wish is to keep out of Parliament; but if I can not avoid that, I will go no further than to a quiet borough where I shall not be plagued with the jobs or humours of my constituents. I have often told you that may political zeal is much abated, and my indolence increases as I grow old.

He declined Fitzwilliam’s offer of a vacant seat for Higham Ferrers in December 1790. It was to maintain the family interest that he came in for Derbyshire on the death of his elder brother.1 He took his seat, 2 June 1794.

A close friend of Burke and the first to compliment him on his Reflections on the French Revolution, he had parted company with Fox on the issue. In September 1791 the Duke of Portland was informed that Lord John would no longer contribute to the Whig press fund ‘to propagate opinions which are not only not consonant to those he professes, but highly injurious to that party of which he is a member, and very pernicious to the community at large’.2 He was inactive in Parliament and on 14 Dec. 1796 came away without voting on the imperial loan, which he thought inevitable but dangerous, the precedents notwithstanding. He died 18 Dec. 1796. Burke, to whom he left a handsome legacy, wrote of him, 23 Dec., that their only difference was that Cavendish did not believe there were any Jacobins in England. While he lived, he wrote of him:

He is a man who would have adorned the best of commonwealths at the brightest of its periods. An accomplished scholar, and an excellent critic, in every part of polite literature, thoroughly acquainted with history ancient and modern; with a sound judgment; a memory singularly retentive and exact, perfectly conversant in business, and particularly in that of finance; of great integrity, great tenderness and sensibility of heart, with friendships few and unalterable; of perfect disinterestedness, the ancient English reserve and simplicity of manner.3