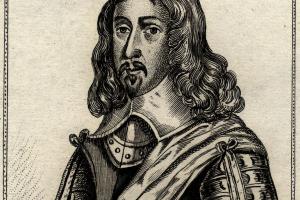 Much of Brereton’s life has been dealt with fully elsewhere.18 The Breretons had resided in Cheshire since the thirteenth century but since then had split into many branches. At the age of six Brereton inherited Handforth Hall, a house in Chester called the Nuns and approximately 3,000 acres. His wardship was granted to his grandfather, Richard Holland†,19 an ardent Protestant, at whose residence of Denton Hall he evidently spent part of his childhood. After receiving a traditional gentleman’s education at Oxford and Gray’s Inn, he married a daughter of his near neighbour, the godly Sir George Booth, who like Holland may have helped to shape Brereton’s religious views.

Brereton was a candidate in the initial stages of the 1626 parliamentary election for Cheshire, along with Sir Richard Grosvenor, Peter Daniell and John Minshull. Both Brereton and Daniell supported Grosvenor for the first place, and in turn they received the support of him and his followers. However, as only one place was available they drew lots to decide who should proceed to face Minshull - a lottery which Brereton lost.20 Brereton encountered more success in 1628, being elected to the second seat after Grosvenor took the senior position. He made no recorded speeches during the Parliament and was only named to one committee - concerning the bill to assign a jointure to the wife of Dutton, Lord Gerard (7 May).21 In the records for the 1629 session Brereton received only one mention, when he asked for parliamentary privilege to be granted to his servant Isaac Detrow, who had been issued with a subpoena.22

During the 1630s Brereton travelled extensively and it is possible that every year he undertook what he termed his ‘summer progress’. In 1634 he journeyed around the United Provinces and in 1635 visited Scotland and Ireland. At other times he went to Paris and the Spanish Netherlands.23 On visiting Norfolk in the early 1630s he recorded the use of decoys by Dutch immigrants to lure ducks, and subsequently built such devices on his own lands. This led to a long running legal dispute with James Stanley*, Lord Strange and Sir Richard Trevor, whose servants continually disturbed Brereton’s decoys as they interfered with their hunting and hawking rights.24

When in Cheshire, Brereton was the most active of the county’s j.p.s, attending over 80 per cent of all quarter sessions. A ‘model puritan magistrate’, he enthusiastically suppressed alehouses and searched out Catholic recusants. 25 He was returned to the both the Short and Long Parliaments for Cheshire, and in March 1643 was appointed commander of the parliamentary forces in Cheshire. During the course of a distinguished military career he routed the royalist forces in Cheshire, defeated Prince Rupert at Tarvin, captured Liverpool, Stafford, Wolverhampton, Whitchurch and Shrewsbury, and vanquished Sir William Vaughan at Denbigh. His defeat of Sir Jacob Astley at Stow-on-the-Wold in 1646 concluded the last great battle before Charles surrendered.26

Brereton died on 7 Apr. 1661. It was intended that he would be interred in Handforth Chapel, Cheadle, but legend states that his coffin was swept away while crossing a river, which, if true, would account for the lack of a burial entry in the Cheadle register.27 By the terms of his will, drawn up the day before he died, £1,000 each was left to his two youngest daughters. No other significant bequests were mentioned, which suggests that Brereton had already settled most of his affairs.28 Two engravings of Brereton, one by G. Glover portraying him on horseback, and another by an unknown artist, were published in 1647 in Josiah Ricraft’s England’s Champions and John Vicars’s England’s Worthies respectively.29