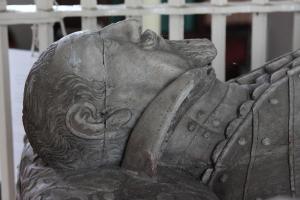 Perhaps because of his ambivalent religious position Blount, like his grandfather and father, took little part in public affairs and held no office outside the counties where his lands lay. In 1593 he was ordered to assist in dealing with certain recusants at Lady Montagu’s house, and five years later he is mentioned as refusing to contribute a horse for the army in Ireland; but these are the only two references found to his activities before 1601, the year in which he was returned to Parliament through the influence of his distant kinsman Henry, 5th Baron Windsor.2

Blount himself was described as a non-communicant in 1612, but he presumably conformed before being appointed sheriff in 1625.3 The outright recusancy of his wife Cecily and of his eldest son, Sir Charles, must have strained his resources, but he left considerable estates at Bicester, Mapledurham and elsewhere, and made large bequests to his children, including £1,500 to his unmarried daughter. An elaborate priest hole dating from the sixteenth or early seventeenth century still exists at Mapledurham. Blount died 11 May 1628 and was buried in Mapledurham church, where a monument was erected.4