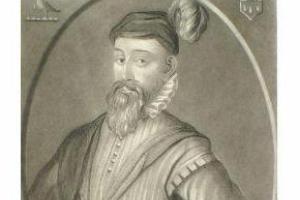 John Perrot was probably born at Haroldston, the home of the Perrot family since the 12th century. His mother had been, briefly, mistress of Henry VIII, and his paternity has been ascribed to the King whom he resembled in physique and colouring. After the death of Thomas Perrot his wardship was acquired by his stepfather Thomas Jones, who then settled at Haroldston. As a boy John Perrot went to school at St. David’s and later his stepfather procured him a place in the household of William Paulet, Baron St. John. He soon gained an unenviable reputation for violence. On one occasion he and Henry, 6th Lord Bergavenny fell out, and before they could be separated broke glasses ‘about one another’s ears’ so that ‘blood besprinkled ... the chamber’. It was to a brawl with two yeomen of the guard that he owed his introduction to Henry VIII. Whether in acknowledgement of his birth or in admiration of his spirit the King promised him preferment, but died before giving it.5

The death of Sir Richard Devereux created a vacancy in the Commons several days after the opening of Edward VI’s first Parliament. The date of Devereux’s replacement by Perrot is not known, but if it occurred during the first session the newcomer was not yet 20. He had few personal links with Carmarthenshire, and his by-election was perhaps the work of Paulet as lord president of the Council, helped by his uncle, the reader in Greek to the young King, and by his stepfather, a leading figure in west Wales and himself a knight of the shire. Nothing has come to light about Perrot’s role in this Parliament but as a Protestant he doubtless welcomed its ecclesiastical legislation. The timing of his knighthood suggests that he sided with the Earl of Warwick against the Protector Somerset. In 1551 he accompanied the Marquess of Northampton to France to negotiate the marriage of the King and the French Princess Elizabeth. During a hunt there he saved Henry II from a wounded boar which threatened his life. The King embraced him in gratitude but Perrot mistaking the gesture for a show of strength lifted Henry ‘somewhat high from the ground, with which the king was nothing displeased but proffered him a good pension to serve’. Perrot declined the invitation and returned to England, where his extravagances forced him to mortgage his family lands. According to his anonymous biographer, Edward VI sympathised with his predicament and persuaded the Council to grant him £100 from concealed lands which he might discover, the grant coming two months before the King’s death. As a favoured courtier he may well have sat in the second Parliament of the reign, but if he did it was not as the knight for Carmarthenshire, that place being taken by his half-brother Henry Jones. He could have replaced his stepfather for Pembrokeshire, as the return from that shire is defaced, or with the backing of his father-in-law Sir Thomas Cheyne have been returned for a Cinque Port, while Paulet’s pervasive influence might have served him elsewhere.6

The Marian Restoration cannot have been to Perrot’s liking and he soon incurred the displeasure of the new regime. In January 1554 he was held a prisoner in the Fleet for three days for assaulting several servants of the 3rd Earl of Worcester. Returned for Sandwich to two of Queen Mary’s Parliaments, on both occasions because Cheyne disregarded the port’s own choice of Members, Perrot aligned himself with the opposition: in 1553 he ‘stood for the true religion’ and in 1555 he supported Sir Anthony Kingston against a main government bill. For harbouring Protestants at Haroldston he was denounced by Thomas Cathern and briefly imprisoned in the Fleet again. His refusal to assist Sir William Herbert I, 1st Earl of Pembroke, in harrying his co-religionists led to a quarrel with Pembroke with whom he had recently become associated in local administration. This quarrel came to the notice of the Queen and imperilled his suit for Carew castle. In an effort to redeem himself he tried to beg Mary’s forgiveness, but in doing so he stepped on her train and earned a rebuke. Mary referred his petition to the Council where Pembroke recommended the grant, although he felt Perrot’s animosity to be such that he ‘would at this time, if he could, eat my heart with salt’. The Council and the Queen followed the earl’s advice, but if they hoped possession of the castle would win Perrot over they were to be disappointed, for it was not long afterwards that he gave his support to Kingston. He attended the meetings at which the parliamentary opposition discussed its tactics and he was presumably the ‘Master Paretes, [Pembroke’s] most favourite and familiar gentleman’ who according to the Venetian ambassador quarrelled so violently with Pembroke for supporting Sir Edward Hastings’s stand in the Commons that he was dismissed from Pembroke’s London house and service. In April 1556 Perrot was arrested on suspicion of complicity in the Dudley conspiracy, but evidence against him was lacking and no proceedings taken. He and Pembroke were reconciled by the following year when he served under the earl’s command at St. Quentin. In January 1558 the Council excused him from service at sea. A month later he complained to the Council about Thomas Cathern, not long after Cathern’s return to the Parliament of that year, and it is possible that he had been defeated at the Pembrokeshire election. He later broke into Cathern’s house and took Cathern into custody at Carew castle. Both men appeared before the Council in June and when it was found that Perrot had ‘exceeded his commission and misused himself’ he was committed yet again to the Fleet. A month later he was bound over in a recognizance of £200 to keep the peace and on 1 Sept. commissioners were chosen to investigate the charge made against him by Cathern. The outcome of this enquiry is not known, but it probably lapsed with the Queen’s death.7

Under Elizabeth, Perrot sat in Parliament again, served in Ireland and in the marches of Wales, and became a Privy Councillor. His choleric nature was to be his undoing. Imprisoned in 1591, he was attainted in the following year and died in the Tower while awaiting execution.