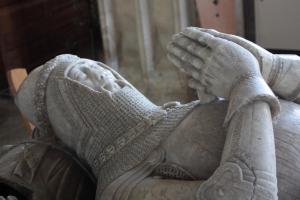 The Wilcotes family took its name from the manor in Quinton which William was to purchase when the chance presented itself. By the time of his death he was also possessed of property nearby in Alscot in Preston on Stour, which he may well have acquired by inheritance. His marriage to the heiress, Elizabeth Trillow, brought him the manor of Hill Croome and lands in Kerswell and Evenlode in Worcestershire, together with more substantial estates in Oxfordshire, situated at Chastleton, Saltford and elsewhere, and it was her house in North Leigh which they made their home. Over the years, as he grew more wealthy, he was to add to his holdings other manors in the region, notably those of Epwell, Tackley and Woodbury in Oxfordshire, and Seacourt in Berkshire. A valor of the combined Wilcotes and Trillow estates as held by William’s widow assessed them at nearly £107 a year, and it may be assumed that since by that time (after 1445) a number of the shire knight’s possesions had passed to others, his own income from them must have been somewhat greater.2

Wilcotes’s career as a lawyer began before 1381, when he started to make appearances in Chancery as a surety on behalf of members of the gentry, including Sir William Burcester*. Having entered royal service, on 15 Dec. 1391, shortly after the dissolution of his fourth Parliament, he was granted for life an annuity of £20 charged on the Exchequer. This was followed less than a year later by a grant to him as ‘King’s esquire’ of the wardship of the lands of the son and heir of Thomas Ludlow of Chipping Campden, together with the boy’s marriage as a gift, provided he supported him in his own household. Perhaps he planned to wed Ludlow to one of his many daughters, for whom he was then on the look out for suitable husbands. Before long a highly satisfactory match was arranged between one of the Wilcotes girls and Thomas Wykeham*, great-nephew of Bishop Wykeham of Winchester. The bishop most likely had much to do with his prospective heir’s marriage, and it is of interest to note that Wilcotes dined in the episcopal household in May 1393. A husband for his daughter, Philippa, was found that November, following Wilcotes’s acquisition of a share in the wardship of William Bishopsden†, together with his marriage, for which he and his fellow custodian paid no more than £60, after they prosecuted the King’s feudal rights at their own expense. That Wilcotes’s daughters were able to attract such favourable suitors no doubt owed much to their father’s influential position as chief steward of the estates of Queen Anne. The date of his appointment is not known, but it had probably taken place some considerable time earlier. Indeed, by January 1394 Wilcotes was so well acquainted with those attendant on Richard II and his queen as to be named as an executor of the will of Sir John Golafre, a much favoured knight of the King’s chamber.3

Wilcotes did not cross to Ireland with Richard II’s army in September 1394, for he had earlier been commissioned both to make a survey of the royal lordship of Macclesfield and to act there as a justice for the eyre, duties which would keep him occupied for some time. His close connexions with other members of the royal court, besides Golafre, are suggested by his nomination as attorney by Sir Richard Adderbury I* (chamberlain and councillor to the recently deceased queen) and by Thomas, Lord Despenser, for the period of their absence overseas with the King. (Wilcotes was to appear on later occasions as Adderbury’s mainpernor, although it was his kinsman, John Wilcotes, whom Sir Richard chose to be his executor when the time came.) In February 1395, while his sixth Parliament was in progress, Wilcotes, together with Thomas Barantyn*, received custody of two-thirds of the widespread and valuable lands lately belonging to Sir Ralph Stonor, which he was to retain for ten years. Then, in June, he surrendered the letters patent for his life annuity of £20, in order to receive instead the larger sum of £38 a year payable from certain dues owed to the Crown by the abbot of Winchcomb (the increased fee expressly providing recompense for his devoted service to the King and the late queen). Furthermore, regular payment of the fee was all but guaranteed by an additional grant to him and Sir Robert Charlton of the guardianship of the temporalities of Winchcomb abbey itself, for as long as they should be in crown possession. Another mark of royal favour came in March 1397 with the issue of a licence to him, Sir Richard Adderbury and Sir Philip de la Vache*, to acquire from the Benedictines of St. Evroul in Normandy their manor of ‘Willicote’ in Gloucestershire (where Wilcotes’s family originated), apparently in order that he might have it for himself. In September he was one of those commissioned to survey the estates forfeited by Richard II’s enemies by judgement of the Parliament in which he was then sitting—nine years after he had watched the triumph of the same men in the Merciless Parliament. His connexions at Court and with Lord Despenser, now elevated to the earldom of Gloucester for supporting the King’s policies, ensured a continued enjoyment of royal patronage up to the very end of Richard’s reign. Thus, in November 1398, Wilcotes was given custody for four years of the manor of Headington, Oxfordshire, together with the hundreds of Bullingdon and Northgate, for an annual rent of £60, only for this to be changed to his greater advantage just six months later into a permanent grant of the same properties, not only in tail but also at the reduced fee farm of £40 p.a. Still the ‘King’s servant’, on 29 June 1399, while Richard II was in Ireland, he obtained confirmation of his office as chief steward of the estates of the late Queen Anne, to hold during royal pleasure.4

Wilcotes’s early acceptance of the change of regime with the accession of Henry IV, was perhaps made easier by an association with the new King’s half-brother, Henry Beaufort, bishop of Lincoln, for whom he had acted as an attorney that same summer, and on whose behalf he was to witness a deed in 1402. Early in the reign his royal annuity and tenure of Headington were both confirmed to him; he was appointed as Henry’s first sheriff of Oxfordshire and Berkshire, and he was retained as chief steward of the late queen’s estates. There can be no doubt that his services continued to meet with royal satisfaction. In February 1401, as a mark of ‘special grace’ and, moreover, as a ‘King’s esquire’, he was granted a charter of free warren in his lands in Gloucestershire and Oxfordshire. Yet more signs of favour were to follow: in 1402 he was awarded for life custody of Cornbury park, and four years later, jointly with the prior of Noyon and Neufmarché (Charleval), he was given the right to farm all the priory’s estates in England for the duration of the war with France. On 15 Nov. 1406 he was formally retained to be of counsel to the duchy of Lancaster, with a fee of £4 a year, and on the same day he received a lease of two parts of the duchy manor of Ascot d’Oyley, Oxfordshire. Furthermore, he also came to the attention of the queen, Joan of Navarre, who in May 1408 demised to him and John Norbury* four of her manors, including the important royal residence at Woodstock, at an annual rent of £127 16s.6d.; a lease which, granted them for the queen’s lifetime, was confirmed in the following year by the King, who then converted the tenure so that Wilcotes and Norbury might hold the property in survivorship. Also in 1409, Wilcotes’s keepership of Cornbury park was confirmed, only from then on he was privileged to hold it in tail-male. Wilcotes had been among those summoned personally to attend great councils in 1401, 1403 and 1405, and in the meantime, in 1402, he had been one of the recipients of letters under the privy seal requesting ‘benevolences’ to help finance the campaigns against rebels in South Wales. However, during these years he did not sit in Parliament, perhaps because his putative brother, John, had since 1399 taken his place as the knight of the shire most regularly elected for Oxfordshire. He made his last appearance in the Commons in 1410, after an absence of over 12 years.5

At the beginning of Henry IV’s reign, Wilcotes had started to act on behalf of the Beauchamps, doubtless in his capacity as a lawyer. In 1399 he had been concerned in a transaction involving the Gloucestershire manor of Milcote (close to his own holdings in the county), in which William, Lord Beauchamp of Abergavenny, had an interest; and he was a trustee when it came to be entailed on the family of Greville of Chipping Campden. The manorial accounts of Beauchamp’s nephew, Richard, earl of Warwick, for the year 1401-2, record that on one occasion the earl’s clerk, Simon Bennett*, rode to Wilcotes’s house to discuss with him certain administrative details relating to the estate of the recently deceased Earl Thomas; and by 1403 he had been so far taken into Earl Richard’s confidence as to be made a feoffee of a number of his manors. An intimate connexion with the Warwick household is further suggested by his appearance in 1404 as a witness to a grant made to Robert Hugford*, a leading Beauchamp retainer. When, in July 1406, Wilcotes petitioned Chancery for a commission of oyer and terminer to bring to trial the malefactors who had broken into his property at Hill Croome, the earl of Warwick was appointed to head the investigation.6

Wilcotes died on 7 Jan. 1411, leaving two sons: (Sir) Thomas (1389-1415), who was retained by Queen Joan as controller of works at Woodstock, but died shortly after returning home sick from the siege of Harfleur; and (Sir) John, whose death in the wars in France occurred some time in or before 1429. William’s widow, Elizabeth, who long survived them all, took two more husbands: Sir John Blaket* (d.1430) and Sir Robert Conyers†. In 1438 she founded a chantry in North Leigh church, where two chaplains were to celebrate divine service for the souls of William Wilcotes and their sons. (The letters patent licensing the foundation made mention of William’s exemplary service to the King’s progenitors.) When, in 1445, Elizabeth died at an advanced age, nearly 35 years after the death of her first husband, she was buried next to him in the chantry where their tomb bearing alabaster effigies still remains. By that time the heirs to the combined Wilcotes and Trillow estates were William’s daughter, Isabel, widow of John Barton II*, and five grandchildren, the offspring of his other four daughters.7