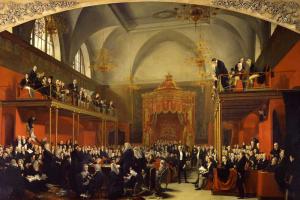 The 'Trial' of Queen Caroline, 1820
View image (will open as a pop-up window)

On the death of the insane George III on 29 Jan. 1820, the prince regent ascended the throne as George IV. The required general election was held shortly afterwards and confirmed that Lord Liverpool’s Tory administration had a comfortable majority in the Commons. Apart from during the controversial divorce proceedings against Queen Caroline in the Lords later in 1820, the prime minister retained the new king’s confidence, and the Whig opposition was never more than a sometimes persistent irritant. Although a dissolution was widely expected in the autumn of 1825, this Parliament ran to nearly the maximum duration permitted under the Septennial Act.

The general election lasted from 6 Mar. to 13 Apr. 1820. Ninety-three or about a quarter of the 380 constituencies were contested. The turnover of Members was low, with only 87 of the 658 Members having no prior parliamentary experience. Opposition made approximately a dozen gains in English seats, but this was offset by losses in Scotland and Ireland. The government kept a substantial working majority, though a significant minority of Members displayed independent or wayward voting patterns.

By 1820 Liverpool was half-way through his premiership, which continued throughout this Parliament. There were major reshuffles around Christmas 1821, when the Grenvillite ‘third party’ was brought in, and again in August 1822, following Lord Castlereagh’s suicide. As a result, Robert Peel became home secretary (in January 1822) and George Canning foreign secretary and leader of the House (in September 1822). They, with their free trade colleagues William Huskisson and Frederick Robinson, contributed to the ministry’s gradual transition towards ‘liberal Toryism’.

The Whig opposition, with radical support, mounted a sustained campaign for economies and lower taxation in the early 1820s, occasionally causing a surprise government defeat. Agricultural distress, which stirred up the country gentlemen, and the 1825 banking crisis, much discussed by a small but growing band of political economists in the House, were among the most prominent issues. The Commons approved of removing the civil disabilities against Catholics in 1821 and 1825, but the Lords remained a stumbling block.

The corrupt borough of Grampound was disfranchised by Act of Parliament in 1821, though its Members continued to sit until the dissolution (after which the two seats were added to Yorkshire’s quota). Otherwise the issue of parliamentary reform was not much aired, except for the odd initiative launched by John George Lambton and Lord John Russell. The 1823 edition of the radical Black Book was a noteworthy denunciation of the patronage received by Members and of their supine political behaviour.

A handful of prominent speakers, of various degrees of Whiggism, laboured intermittently in the opposition cause. Some, like Henry Brougham, were gifted but erratic, while others, for instance James Macdonald, were simply dogged. The low partisan temperature reached in the mid-1820s enabled John Cam Hobhouse to refer in passing during a Commons debate to ‘His Majesty’s opposition’, a phrase which was to survive in general usage even when the more normal condition of continuous party strife returned.

John Rickman, who masterminded the first census, took over as clerk assistant in 1820. Among the diarists of this Parliament, the advanced Whig Henry Grey Bennet’s is the most detailed, though only surviving for the 1821 session (in the Parliamentary Archives). Canning’s calling Brougham a liar (17 Apr. 1823) provoked a stand-off on the floor of the House; their friends feared the quarrel would result in a duel, but the matter was eventually settled amicably. Canning was certainly the most talented speaker in the Commons in this period, though his style of oratory was becoming dated. The future Speaker John Evelyn Denison made a professional maiden speech, 27 April 1826.