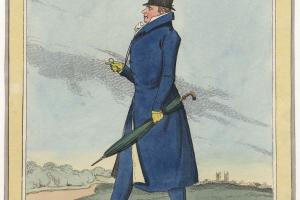 Robinson owed his introduction to public life to his kinsman the 3rd Earl of Hardwicke, who made him his private secretary as lord lieutenant of Ireland (1804-6). As such he was entrusted with presenting the viceroy's case to Pitt for the removal of (Sir) Evan Nepean* as chief secretary. In January 1806 Hardwicke informed his half-brother Charles Yorke:

I should like much to bring forward Robinson; if we could find a seat in Parliament for him, the money would be easily found; and it would put him in the way of a seat at the Admiralty or Treasury board, as an introduction to business.1

The viceroy had already failed in an attempt to procure Robinson a seat for Sligo, a borough owned by Lady Grantham's brother-in-law. In February 1806 Charles Yorke undertook to sound out such borough proprietors as Lord Eliot and the Bullers. In the event, Robinson came in for Lord Charleville's borough of Carlow at the general election. Hardwicke negotiated the terms, Charleville giving him the choice of '£3,000 for the duration of Parliament' or '£2,000 now and £500 every session exceeding three'.2

In his first Parliament Robinson voted against the Grenville ministry in the Hampshire election petition, 13 Feb. 1807, and in his maiden speech, 15 Apr., opposed Lyttelton's motion against their dismissal from office. Spencer Perceval informed the King that he 'distinguished himself very much', but the speech went unreported and was overshadowed by the brilliant perforance by the brilliant performance of another debutant Robert Pemberton Milnes. Robinson had already declined office, the Duke of Portland having offered to place him on the Admiralty board. According to Lord Malmesbury, his reluctance was due to Lord Hardwicke's opposition to the new ministry and to Lady Grantham's belief that the ministry was too feeble to last. He procured an independent and secure seat at the ensuing election, coming in for Ripon in his kinswoman Miss Lawrence's interest; and although he agreed to accompany Lord Pembroke on his futile mission to Vienna, it was 'as a friend' and not as an employee'.3

On 11 Apr. 1808 he re-emerged at Westminster as a critic of the offices in reversion bill; his preference for Henry Bankes's line did not go unnoticed by ministers. They offered him the opportunity of moving the address in January 1809. After an apology to Hardwicke for his compliance, he did so (19. Jan) in what Perceval called 'a very able speech, which was received by the House with very good effect'. In May Castlereagh secured him as his under-secretary at the War Office. As such he was made his go-between by the Foreign secretary, who was anxious to oust Castlereagh. He resigned with Castlereagh that autumn, declining to serve under his successor. He refused Perceval's offer to a place at the Treasury or at the Admiralty, claiming that re-election would be inconvenient, but with particular reference to his lack of personal acquaintance in the new government and 'the general unsettled appearance of affairs'—the new ministry was not expected to last. He was named by Lord Porchester for the select committee on the Scheldt expedition, 5 Feb. 1810, being regarded as Castlereagh's representative. On 16 Feb., with Castlereagh's concurrence, he replied to the critics of Wellington's proposed annuity—he was his apologist in a pamphlet Sketch of the campaign in Portugal that year. The Whigs listed him amoung Castlereagh's adherents at that time. In June he accepted a seat on the Admiralty board, on the offer of Charles Yorke. He insisted that his only object was to contribute to the latter's 'comfort and satisfaction'.4

On 27 Feb. 1812 Robinson 'highly distinguished himself' in his rousing reply to Turton's censure motion. Robert Ward, who called it 'the best young man's speech I ever heard in Parliament', claimed that 'in the appearance of an old and able debater' he outstripped his contemporaries, not excepting Peel, one of the young ministerialists with whom Robinson consorted at the Alfred Club. Lord Mulgrave 'said there was nothing to which Robinson might not look'. Apart from this, however, he had interrupted his silence in the House for two years only to speak on Admiralty business. On Perceval's assassination he left ostentatiously for Yorkshire on militia duties.5 He may not have been averse to inclusion in a Wellesley ministry, which did not materialize. At the risk of offending his patron at Ripon, and following his brother's line, he voted for Canning's motion for Catholic relief, 22 June, though he spoke against the Irish potato tithe bill two days later. Castlereagh's return to high office fixed his allegiance to Lord Liverpool's ministry and in September 1812 he accepted the vice-presidency of the Board of Trade (his father's former office) with a privy councillorship and a seat at the Treasury.

Henceforward Robinson emerged as one of government's second-rank debaters. His connexion with Castlereagh, leader of the House, afterwards cemeted by marriage, encouraged it and he was acknowledged to be an improved and improving speaker, who 'spoke with vivacity and cleverness, and in a most gentlemanly tone, but wanted a sonorous flow'. Thus on 1 Dec. 1812 he replied to opposition on the progress of the Peninsular war and on hostilities with the United States, and on 7 Dec. he justified the fresh public reward of Wellington. Following Castlereagh's line, he remained favourable to Catholic relief, 1 Mar. 1813, explaining that there was no question, to his mind, of making unqualified concessions. On 18 May 1813 he spoke in his official capacity against extending the trade embargo to penalize the United States: 'nothing can be worse than the restrictive system which Buonaparte compels us to adopt'. At the close of the year, having vacated the Treasury board to become joint paymaster-general with Charles Long*, he accompanied Castlereagh to the Continent and with one break remained there until peace was concluded, full of admiration for his diplomacy. Lord Liverpool was impatient for his return.6 On 20 June 1814 he made himself useful to the ministry by cooling the debate on the Princess Charlotte's marriage intentions. His own, put into execution soon afterwards, were highly advantageous to him.

In Castlereagh's absence, Robinson was his spokesman in the House. In February 1815 his official duties involved him, apparently against his personal inclinations, in presenting the proposals for agricultural protection embodied in the Corn Law amendment bill, which he introduced on 1 Mar. On 6 Mar. he secured the 80s. a quarter threshold against the import of corn from abroad. The mob repeatedly attacked his town house and on 10 Mar. he 'rose under great agitation' to rebuke Burdett for his insinuations about the mishandling of the insurgents. He did not see why he should, through misrepresentation, bear the brunt of rhe unpopularity of a measure by which he did not gain 'sixpence'.7 He had the satisfaction of publicizing the conclusion of peace with the United States, 11 Apr. 1815, and sought to contradict opposition assertions about Bounaparte's popularity in France and the negligence that enabled him to escape from Elba, 7, 20 Apr.; he justified the resumption of hostilities against him, confident of success, 28 Apr. On 27 Feb. 1816 (as also a year later) he defended the army estimates at some length, and on 20 Mar. in the debate on the Admiralty salaries denied that officials were overpaid: he himself held two offices but drew the emoluments of only one of them. In the debates on agricultural distress, he claimed, 7 Mar. 1816, that the outcry against the Corn Law amendment had proved groundless, and in questioning the efficacy of a committee of inquiry, 28 Mar., claimed that government's tax concessions would sufficiently relieve agriculture. He was averse to the attempt to turn 'the protecting into prohibitory duties', except in the case of the Irish butter trade, and he went on, 25 Apr., to refuse to abolish the transit duties on foreign linen clamoured for in Ulster, wher he was consequently burnt in effigy. On 7 May he replied to Brougham's arguments, based on 'a complete fallacy', in favour of retrenchment in government departments.

He justified the suspension of habeas corpus, 25, 26 Feb. 1817, rebuking Burdett for maligning the gentry of England and defending Castlereagh's nomiation to the secret committee of which he too was a member. On 13 Mar. in a a sensitive reply to Brougham's motion on manufacturing distress he pointed out that in the post-war recession, government could not equitably offer relief to certain sectors at the expense of the whole. He opposed abolition of the slat duties without a substitute source of revenue, 25 Apr. On 22 May, clashing with Peel, he came out in favour of repealing the transit duties on foreign linen. He refused bounties for the Newfoundland trade, 3 July 1817, and refused to blame the Spanish government for resorting to protective duties against English goods, as long as the English themselves relied on such duties, 11 F?eb. 1818. On 5 Mar. he opposed a motion condemning government for its employment of informers against sedition, claiming that the allegations made were largely false. Much as he disliked legislative interference in industrial experience, he concluded the need to regulate child employment in the cotton factories, 27 Apr. He tried in vain to secure exemption for his old school from Brougham's proposals for inquiry into the abuse of charitable foundations and clashed with him on the subject, 8, 13 May, 3 June 1818.

In January 1818 Robinson had succeeded Rose as treasurer of the navy (ceasing to be joint paymaster general) and had been made president of the Board of Trade with a seat in the cabinet. Lady Spencer attributed his appointment to Castlereagh's influence 'a set off against Peel'. Peel was certainly 'in high dudgeon' about it: he had always made light of Robinson's pretensions to statesmanship. But Liverpool informed the Regent that 'his standing in the House of Commons, his character and talents appear fairly to entitle him to it'. He was also regarded in the House as 'a most amiable gentlemanlike man'.8

Robinson was prominent neither in cabinet nor in debate in the first session of Parliament of 1818.9 He opposed a bid to extend agricultural protection, 22 Jan. 1819. He was placed on the secret committee on the Bank, 3 Feb. On 25 Feb. he defended the Duke of York's grant under the Windsor establishment bill. Officially he was preoccupied with the convention with the United States on fishing rights in North America, for which he introduced legislative sanction, 26 Apr. He was an opponent of legislative interference  in wage regualtion, 13 May. He defended the foreign enlistment bill, 10 June. On 13 Dec. 1819 he defended at length the bill to prevent seditious meetings, claiming that it was necessary to deal with 'a frightful abuse'. A diligent and shrewd administrator, he remained a somwewhat reluctant debater and the strain of high office, particularly when he was called on to form a government in 1827, proved too much for him.10 He died 28 Jan. 1859.