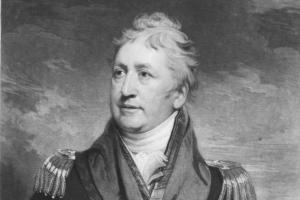 Beresford, a naval officer, and his brother William Carr Beresford†, a soldier who became 1st Viscount Beresford, were the illegitimate sons of the 2nd earl of Tyrone, who was created marquess of Waterford in 1789. Waterford never denied his paternity and assured John in 1795 that ‘Lady W., all the boys and girls, my brothers and every part of my family felt equal pleasure and gratification with me on your gallant conduct’, adding that ‘Carr and you ... have both behaved in your life in a manner to be a credit to me’. As late as 1827 Thomas Creevey* wrote that the brothers were

still in ignorance of who their mother was, or whether they had the same, but from the secrecy upon this head, from their being sent from Ireland, and above all, from Lady Waterford having seemed always to show more affection to them than her own children, there is a notion they were hers before her marriage.2

In 1820 Beresford was again returned for Coleraine by his legitimate brother, the 2nd marquess of Waterford.

He remained an active naval officer, commanding at Leith and in the West of Scotland, 1820-23. He was an occasional attender who continued to give general support, when present, to Lord Liverpool’s ministry. He voted in defence of their conduct towards Queen Caroline, 6 Feb. 1821. He divided against Catholic relief, 28 Feb. He voted against repeal of the additional malt duty, 3 Apr., and the disfranchisement of ordnance officials, 12 Apr. 1821. His only recorded vote in the following session was against relieving Catholic peers of their disabilities, 30 Apr. 1822. A vacancy at Berwick early in 1823 enabled Beresford’s family to exploit their recently acquired interest in the borough, and he came in without opposition. He divided against repeal of the Foreign Enlistment Act, 16 Apr., and inquiries into the prosecution of the Dublin Orange rioters, 22 Apr., and delays in chancery, 5 June 1823. There is no recorded parliamentary activity for 1824. He presented a Berwick petition against the coastwise coal duty, 19 May,3 and voted for the financial provision for the duke of Cumberland, 6 June 1825. The home secretary Peel described him that autumn as ‘a most worthy man and an excellent friend’.4 He divided against reform of Edinburgh’s representation, 13 Apr. 1826. At the general election that summer he was returned for Northallerton, where his late wife’s sister Mary Anne Peirse was patron. He voted against Catholic relief, 6 Mar. 1827, 12 May 1828, and repeal of the Test Acts, 26 Feb. 1828. He told the House, 18 Mar., that he had complained many times to the admiralty about the conditions endured by passengers emigrating from Ireland. He defended the size of the navy and the role of the paymaster of marines, 16 May. He voted with the duke of Wellington’s ministry against reduction of the salary of the lieutenant-general of the ordnance, 4 July 1828. In February 1829 Planta, the patronage secretary, predicted that he would side ‘with government’ for Catholic emancipation, and despite presenting a hostile petition from Northallerton, 12 Feb., he voted for its concession, 6, 30 Mar. He divided against transferring East Retford’s seats to Birmingham, 11 Feb., and the enfranchisement of Birmingham, Leeds and Manchester, 23 Feb. 1830. He urged the House to pass Lord Ellenborough’s divorce bill, 6 Apr. He paired against abolition of the death penalty for forgery, 7 June 1830. He was quietly returned for Northallerton at the general election that summer.

With Northallerton partially disfranchised by the Reform Act, Beresford fell back on Coleraine, where he was returned at the general election of 1832, only to be unseated on petition. Peel secured his return for the government borough of Chatham in 1835 after appointing him to the admiralty board, but he retired in 1837.6 The following year he acted as George Loftus’s second in a duel with the 3rd marquess of Waterford; Benjamin Disraeli† suspected ‘a cross’, as neither party was injured, which seems likely given that Waterford was Beresford’s nephew.7 Beresford lived in retirement on his Yorkshire estate and died after a long illness in October 1844. He was succeeded by his eldest son George de la Poer Beresford (1811-73), Conservative Member for Athlone, 1841-2.8