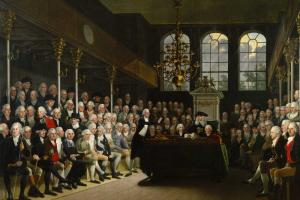 The 1818 Parliament saw an intensification of party conflict, as the Whig opposition, having gained a few seats in the general election and installed George Tierney as their Commons leader, made a strong initial muster. However, their motion of censure against the Liverpool ministry in May 1819 was crushed by two to one; and there was a significant falling off in their numbers in opposition to the government’s repressive legislation (the so-called ‘Six Acts’) introduced in the emergency session of late 1819 in the aftermath of the Manchester ‘Peterloo’ incident. The Grenvillite squad pursued their own course, moving ever closer to the administration. The death of George III in late January 1820 brought the regent to the throne as George IV and necessitated a dissolution.

The general election began on 17 June and ended on 18 July 1818. Of the 380 constituencies, 120 (32 per cent) were contested. The principal issues aired were parliamentary reform, restrictions on civil liberty, economy and retrenchment and Catholic relief. A subsequent publication, entitled The Late Elections, purported to provide a record of the electoral professions of the candidates to act as a test for their future conduct, but its coverage was uneven and in many cases scanty. The Whig opposition did particularly well in the large English boroughs and gained about half a dozen seats overall. In Westminster, the Whig lawyer Sir Samuel Romilly and the radical Sir Francis Burdett beat the Tory candidate, but the outcome was seen as a tactical victory for the Whigs over the local reformers and a blow to Burdett’s prestige. In the by-election of March 1819, precipitated by Romilly’s suicide, the Whigs, with government and Court backing, returned their own man over Burdett’s acolyte. The radical bore Joseph Hume was returned for Aberdeen Burghs. Investigation of election petitions uncovered gross corruption at Barnstaple, Penryn and Camelford. The scapegoat Jew Sir Manasseh Masseh Lopes was prosecuted for bribery at Barnstaple (and Grampound), while Henry Swann suffered the same fate for his activities at Penryn. One-hundred-and-fifty-one (23 per cent) of the Members returned had no previous parliamentary experience; and another 36 such men came in during the life of the Parliament.

Soon after the elections, some leading Whigs decided to invite Tierney to become the party’s leader in the Commons. He received a formal requisition, signed by 113 Whigs and approved by six others. He accepted with some reluctance. Under his leadership, the Whig opposition at first showed up well in divisions, but when he risked a motion of censure against the government on 18 May 1819, he was beaten by 357-178. Whig resistance to the repressive post-Peterloo legislation of late 1819, on which the Grenvillites supported minsters, paving the way for their merger two years later, was steady, but down in numbers. Analysis of the published division lists of this Parliament indicates that its 710 Members comprised 332 general supporters of government; 239 in varying degrees of opposition; 73 ‘waverers’, and 66 inactive men. A ‘third party’ initiative by Charles Tennyson came to nothing.

The most significant legislation of this Parliament was that which embodied the recommendation of a select committee, chaired by Robert Peel, for the resumption of cash payments. Sir Francis Burdett’s motion for parliamentary reform, 1 July 1819, was defeated by 153-58; but preliminary steps were taken towards disfranchising corrupt boroughs and giving their seats to large unrepresented manufacturing towns. On 6 May 1819 the Whig Lord Archibald Hamilton carried by 149-144 the appointment of a select committee of inquiry into the government of the Scottish royal burghs; and on 2 Mar. 1819 the Whig lawyer and historian Sir James Mackintosh successfully moved for a select committee to inquire into capital punishment for felonies, which produced a seminal report. A motion for Catholic relief, which remained an open question in the cabinet, was rejected by 243-241, 3 May 1819.