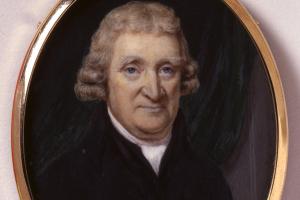 Gilbert continued to sit for Lichfield on the interest of the 1st Marquess of Stafford, whose estate agent he once was. During the last Parliament he had been chairman of ways and means. He was again active as such in the session of 1790-1, in which he was also listed hostile to the repeal of the Test Act in Scotland, and paired with ministers on the Oczakov question, 12 Apr. 1791. Three days later the Hon. Henry Hobart replaced him in the committee’s chair. There was now little time for his ruling passion for Poor Law reform, but his reputation in that field was made. His other interests, highways and canals, drew him briefly into debate on canal tolls, 21 Mar. 1793, and on 8 Apr. 1794 in defence of the Public Highways Act he had sponsored in 1773.1 He also spoke in favour of the Farnham Hop bill, 7 June 1793. On 13 Jan. 1792 he informed Pitt that, though willing to attend, he found his health ‘impaired by too assiduous an application’ and ‘dreaded the thought of late hours and crowded Houses’. He therefore wished for a less onerous situation. In December 1794 he was pensioned off with £250 p.a., ‘to pass the evening of his life at his paternal estate among the barren moors of Staffordshire, which he had at great expense rendered a desirable residence’. He had amused Canning before his last session by his talk of ‘various turnpike bills which he had to attend to ... more like a young Member just come in, and determined to be a very active one rather than a person who was about to accept the Chiltern Hundreds’.2

Gilbert died 18 Dec. 1798 ‘in his 78th year’. His widow wrote to Pitt, 14 Aug. 1800, to remind him how much Gilbert’s family had lost by ‘expenses incurred in his anxious pursuit of various objects of public utility’. She added:

He was given to understand that you admitted the justice of his claims, and was disposed to meet his wishes ... he had repeated assurances from the gentleman that was to succeed him in Parliament [Lord Granville Leveson Gower], and on which he so firmly relied that (contrary to the advice of many friends) he hesitated not to resign. He was soon convinced of his error and felt it severely to the latest moment of his life.3