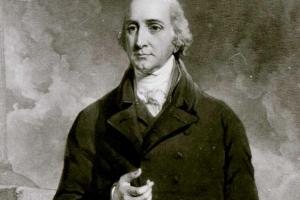 An outstanding scholar and mathematician, of great personal charm, Windham was early acknowledged to be one of the most gifted young men of his generation. ‘He is young, but full of virtues, knowledge, and good sense, and, in one word, of the old rock—of which so few gems are left’, wrote Horace Walpole to Horace Mann, 14 Oct. 1779; ‘I well know his worth, and respect him exceedingly.’ ‘His person’, wrote Wraxall,1 ‘was graceful, elegant, and distinguished ... over his whole figure nature had thrown an air of mind. His manners corresponded with his external appearance, and his conversation displayed the treasures of a highly cultivated understanding.’ Yet his early career was handicapped by indecision: deeply introspective, his self-criticism was such as to make him at times almost incapable of action. While he moved in the literary world, and was a devoted friend of Dr. Johnson, he was also one of Fox’s coterie, and for many years vacillated between scholarly pursuits and political activities. Wraxall thought that his talents, ‘brilliant and various as they were’, appeared ‘more adapted to speculative than to practical life; rather fitted for the university than for the Cabinet’. Windham himself wrote in 1790: ‘I am now a little of two characters and good in neither: a politician among scholars and a scholar among politicians.’2

His first move to enter Parliament seems to have been late in 1777 when he began negotiations for a seat at Sudbury.3 Early next year he made his first public speech at a Norfolk county meeting, vigorously condemning a proposal to raise a subscription for carrying on the war. ‘Most people admired the manner of Windham’s speaking’, wrote James Woodforde, ‘so much elegance, fluency and action in it.’4 A serious illness soon afterwards prevented any further political activity, and Windham subsequently went abroad for almost two years. On 20 Aug. 1780, while he was still absent, Edward Eliot, who had placed his parliamentary interest at the disposal of the Opposition, suggested Windham as a candidate ‘likely to make a public speaker and not very likely to get a seat elsewhere’. Windham, he wrote to Portland, was personally unknown to him, and what he had heard of his principles and abilities was his only reason for suggesting him. Eliot’s recommendation seems to have been accepted and on 27 Aug. he wrote again: ‘I am rejoiced at your fixing upon Mr. Windham. By what I have heard he is so perfectly suited to my taste, that he will surely be my man should you not contradict it, and if through you or any other means I have the good luck to hear in time his christian name and the name of his seat.’5 In the end nothing came of the suggestion, possibly because Windham could not afford Eliot’s price—according to Rockingham Windham seemed willing to spend only about £1,500.6 Instead, he was nominated for Norwich, but only arrived in England in September 1780, a few days before the election, and came bottom of the poll. Soon afterwards he was mentioned as a possible candidate for Westminster, but about this ‘remained nearly passive’, so he informed his Norwich friend and supporter, E. Norgate; ‘not thinking a seat for Westminster an offer to be declined if attainable upon easy terms, nor considering it an object to be pursued through the medium of much difficulty or expense’. Eventually, finding that there was in the constituency strong support for parliamentary reform, which would have rendered his situation ‘unpleasant’, he determined to stand for Norwich, and declined Westminster.7

On the formation of the Coalition in 1783 Windham, though as usual beset with hesitation and self doubt, accepted the post of secretary to Lord Northington as lord lieutenant of Ireland. But on 16 July 1783, faced with the prospect of having to manage the new Irish Parliament, he sent his resignation to Northington:

The real ground of my determination is my conviction that the bodily infirmity, brought on by the life I must lead, and the business I must go through, will for the time so oppress and incapacitate me, as to render me totally incapable of discharging the duties of the situation ... A life of close confinement, constant application, anxious thought, and late hours in hot rooms, is what I am satisfied I cannot stand ... You may have been witness in some measure of the fits of languor and debility which I frequently experience: but no one but myself can judge of the effect they have on any exercise of the understanding. They have at various times rendered me incapable of the business, such even as it has been hitherto.

I am now ... returned to my privacy, with a greater enjoyment of it than ever, though possibly not so rooted in it as formerly: the transition to public life having been once made, will be more easy on any future occasion ... At present, however, I have no prospect of such an occasion, nor any wish for one. When a vacancy happens at Norwich I shall probably come into Parliament, and my attachment to a particular set of men will then probably lead me, by degrees to take an active part in business, but my genius lies to employment of a different kind, and however I may embark for a while ... it will only be with a view of returning with higher enjoyment to the pursuit of literature and philosophy.

At the general election of 1784 Windham was returned for Norwich after a fierce contest. Throughout this Parliament he naturally voted with the Opposition, though he seems at first to have attended the House rather spasmodically, grudging time diverted from his studies. On 5 Feb. 1785 he noted in his diary without comment that he had made his first speech in the House, and on 20 Mar. he wrote that he had spent twenty days on the Penryn election committee—

In no equal period my faculties were ever so much excited. Such are the advantages I have lost by delaying so long my entrance into business; and such the reasons of that superiority which men of the world are perpetually to have over men of study. The love of knowledge and general desire of improvement will not produce such exertions as are called forth in the prosecution of business involving present interests and terminating in immediate consequences.

He was anxious to excel as a speaker, but dithered as usual. ‘This habit of indecision’, he wrote on 6 Apr., ‘if some means are not found to stop its progress and abate its malignity, will corrupt and eat away my understanding to the very core; it wastes my time, consumes my strength, converts comfort into vexation and distress, deprives me of various pleasures, and involves me in innumerable difficulties.’ On 18 Apr. he reported that he had gone to town ‘without a suspicion that I should not deliver some part at least of what I had prepared with so much thought, and to my own apprehension, with so much success on the parliamentary reform. The heat of the House disordered my faculties and enfeebled my powers and brought on a state of inability from which I could never recover sufficiently to rise.’ He at length spoke in the House for a second time on 12 May on the Irish propositions and ‘felt more possessed than on the former occasion, but thought my performance inferior’. But he was again very nervous when on 1 June 1786 he supported the charges against Hastings over the Rohilla war, though he noted that he had ‘so far executed what I had prepared, that I conceive it to be the fashion to talk of what I did as rather a capital performance. ’Tis a strong proof on what cheap terms reputation for speaking is acquired.’8 He does not appear to have spoken again till 21 Feb. 1787, when he opposed the commercial treaty with France on the grounds that it was contrary to the hitherto accepted principles of British foreign trade.9 On 22 Mar. he presented charges against Hastings, and his speech, according to Sir Gilbert Elliot, was ‘generally approved of’—10

His voice and delivery are exceedingly good ... Both his ideas and language are remarkable for a terse, accurate, logical and scholar-like character, and this character was perfectly preserved throughout the performance ... At the same time there were some defects which flowed from his character or constitution. He was more miserably oppressed by fear than anybody ever was ... for the day or two preceding ... he may fairly be said to have carried hell about with him in his mind. The House had met and waited for him for about an hour, and at length he entered with the colour of a lemon. His voice was extremely low, and his whole manner dejected at the outset, and even when he had recovered from the first flurry of rising, his sentences were now and then interrupted by a long, painful, fatigued, nervous sort of sob ... When I went down to the bench where he sat, immediately after he had done, to wish him joy of safe deliverance, I found him quite miserable and with the mortified humiliated appearance of a man who had just ruined himself.

Appointed one of the managers of Warren Hastings’s trial, Windham as usual procrastinated, and when the trial opened in Westminster Hall he told Fanny Burney: ‘This day, so much wished, has seemed to me, to the last moment so distant that ... it comes upon me all unexpected, and finds me unready.’11 His diffidence about speaking remained, and on 20 May 1788, after a debate relating to expenses of the trial, he wrote: ‘If I had been practised to speaking as I ought to have been, it would have been right to have said something, but not being so practised, I was right perhaps to remain silent.’ He spoke several times during the Regency crisis in support of the Opposition’s case against limiting the Prince of Wales’s authority, and during the remainder of the Parliament fairly frequently on a variety of subjects. On 8 May 1789 he supported a proposal to repeal the Test Act; on 20 May he opposed a bill to make destroying plants, trees and shrubs a felony because ‘there was a very lavish habit of extending the penal laws of late, which he thought the House ought to guard against as a very great evil’; and on 22 July he urged the House to send corn for relief of famine in France, and said that ‘he thought that a slight inconvenience ... might show their kindness, their goodness, and the sincerity of their friendly professions towards France’.12 Yet he followed Burke in his bitter opposition to the French revolution, and eventually broke with Fox.