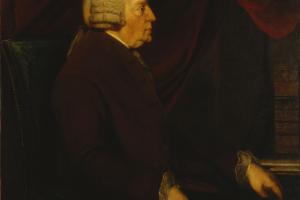 The Harris family had been settled in Wiltshire since the sixteenth century, and had lived in the Close, Salisbury, since 1660. James Harris was the first of the family to enter Parliament. His cousin Edward Hooper of Heron Court, near Christchurch, M.P. for Christchurch 1735-48 and a commissioner of customs 1748-93, had the chief influence in the borough, and it was on his interest that Harris was returned. Harris was also connected with the Yorkes: his father’s first wife and the wife of Philip, 1st Earl of Hardwicke, were sisters.

Harris was a classical scholar of note, a lover of music and art, and a writer on philology and philosophy. His principal work Hermes, or A Philosophical Inquiry concerning Universal Grammar, was published in 1751 and dedicated to Lord Hardwicke. It had a great vogue at the time, but today appears dull, formal, and pedantic. Dr. Johnson described Harris as ‘a sound, sullen scholar’; ‘I looked into his book’, he said, ‘and thought he did not understand his own system.’1 But others, who had perhaps studied Harris more carefully, had a higher opinion of his worth. Gibbon describes him as ‘the learned and amiable Mr. Harris’, who ‘laboured to revive the studies of Grecian literature and philosophy’.2 Harris was a born writer, never happy without a pen in his hand. From the day of his entering Parliament he began to keep a journal of the debates there, and apparently continued doing so until the end. Unfortunately, only the part from 1760-1766 appears to have survived (apart from fragments for 1779 and 1780). Still, this is the most important source yet discovered for debates in the Parliament of 1761. Harris was intelligent and accurate; he tried to summarize the arguments of the speakers fairly, and often succeeds in capturing typical phrases and turns of speech. In addition, he made careful memoranda of conversations and discussions during the time he was in Parliament, and these form a valuable supplementary source of information to the correspondence of that period.3 A pleasing picture of Harris emerges from the reading of his papers: he had a lively mind, graced both with wit and humour, and his learning never obtrudes; firm in his political views and loyal in his allegiances, he also tried to be fair to the other side. He knew no secrets and makes no great revelations, but among the minor chroniclers of his age he deserves a high place.

Harris entered the House without any strong political views, except a general wish to support Administration; and at first looked towards Hardwicke as his political mentor. His only interventions in debate during his first session were on the Lichfield election petition—‘I spoke, and was heard attentively’, he wrote on 1 Feb. 1762. On 26 Nov. he was offered through Lord Shelburne a seat at the Board of Admiralty. Shelburne was a Wiltshire neighbour and old acquaintance, and presumably knew that Harris was well disposed towards the Bute Administration. Harris asked for time to consult his friends: his brother Thomas was doubtful, but Edward Hooper pressed him to accept. On 28 Nov. he informed Hardwicke of the offer, who advised him to decline; Legge gave the same advice; and on 2 Dec. Harris told Shelburne that he would not accept the place. Then, Harris’s account continues:

Things were in this situation, and I myself full of thought the remainder of the day and all the night following. When I got up the next morning [3 Dec.], and without saying a syllable to anyone what I proposed and where I was going, I went to Lord Shelburne’s. My Lord was then going to Wycombe, his coach at the door, and [had] I come a quarter of an hour later I should have missed him. As soon as I saw him I asked whether I might have liberty to change my mind. He said I might. I then at once told him I was ready to accept the honour his Majesty had offered me of a place in the Admiralty, and to move the Address upon the Preliminaries. I gave my Lord the same reasons for doing this which had influenced myself: the contrariety of opinion among my friends and my own diffidence had at first made me decline, but that when I reflected how great an honour had been made me and in how generous a manner, unsought, unsolicited; when I reflected too that even though I refused a place, I so far approved the present measures of Government that I should certainly vote for them, I had come to a resolution contrary to my former and hoped my Lord would forgive me for being thus changeable, which I would not be any more he might be assured.

On 9 Dec. 1762 Harris moved the Address in favour of the peace preliminaries: the text of his speech is among his papers, and it contains little except what might have been said by anyone on such an occasion. (Horace Walpole, a political opponent, writing of this debate, calls Harris a ‘wretched orator’.4) On 16 Dec. Harris talked with George Grenville, first lord of the Admiralty. ‘Mr. Grenville’, he wrote, ‘... expressed his good opinion of me, and of his early desire ... that I should be taken into employment; that Lord Bute approved it, knowing me by character though not personally.’ In April 1763, when Grenville moved to the Treasury, he took Harris with him, and a warm friendship developed between the two men. Harris came to respect Grenville as he did no other politician, and in his pages a picture of the statesman emerges such as is not found elsewhere: an efficient and tireless man of business, concerned only for the public welfare, and a loyal and disinterested friend, able to evoke real warmth of feeling. Harris shared Grenville’s political fortunes; was dismissed with him in July 1765; followed him into opposition to the Rockingham Administration; and remained attached to Grenville to the end. He had no liking for Wilkes and in 1769 could not bring himself to vote with Grenville on the Wilkes case; he voted for the expulsion of Wilkes, 3 Feb. 1769, and in the divisions on the Middlesex election abstained. Similarly in January 1770, pressed by Grenville to attend the committee on the state of the nation when the Middlesex election was to be again debated, Harris did not arrive in London until the division had been taken.5

The death of Grenville in November 1770 released Harris from his nominal allegiance to the Opposition, and henceforth he steadily supported North. His speeches in the House were infrequent, and mostly on uncontentious topics. One cause he did have much at heart—the relief of Protestant Dissenters, and in February 1772 and March 1773 he spoke in their favour.6 He supported North’s American policy without any reservations. By August 1772 he was soliciting office from North, and in January 1774 was offered the post of comptroller and secretary to the Queen. ‘’Tis a place more of honour than of profit’, wrote Mrs. Harris to her son, ‘but it suits him in all respects more than a place of business.’7 And Harris himself wrote about his place: ‘They were two offices, required no duty, were worth together £500 a year (£25 deducted), were regularly paid, and the duty done by deputy ... all I had to do was to sign receipts.’

In other respects also this office was ideal for Harris. He had a profound reverence for the royal family, amounting almost to worship, and to be about the court and to take part in royal ceremonies, gave him intense pleasure. He carefully described his first audience with the Queen when she presented him with the seals of office—‘an easy and familiar conversation, which lasted at least twenty minutes’. They began by talking about music. ‘I told her Majesty’, writes Harris, ‘that for the honour of Germany it had the best scholars, the best soldiers, the best musicians, and the best painters now in Europe.’ Then the conversation passed to artists and to writers. ‘She honoured me with mention of my works. I lamented that the subjects being philosophical were some of them difficult. She politely said there were parts intelligible.’ The Queen ‘fell into an encomium upon the King’s worth and goodness’, in which Harris joined, and added his own praise of the Queen. ‘Thus ended this extraordinary conference, in which I had the strongest proofs of the Queen’s excellent understanding and goodness of heart.’ The first royal ceremony which Harris attended was the christening of the King’s sixth son, Prince Frederick Adolphus, on 24 Mar. 1774. The ceremony took place in the Queen’s bedchamber in the presence of the King, the ladies of the bedchamber, maids of honour, officials of the Queen’s court, foreign ministers, peers and peeresses, etc.

The Queen was in her state bed, her head decorated with jewels, and her hair without powder ... At the bottom of the bed was a table with four gold candlesticks and a gold ewer with water. There was a desk and cushion for the Archbishop just by it, who soon began reading the office. The King stood by the Archbishop. The child was delivered by Lady Charlotte Finch to Lady Effingham, who with Lords Hertford and Jersey were the sponsors. The name was Frederick Adolphus. The child cried aloud great part of the time.

After the ceremony Harris was the last to leave the room. ‘The Queen did me the honour to speak to me’, he writes, ‘asked when I expected my son home from Berlin, and how my gout did. I replied, such a sight was enough to cure any complaint.’