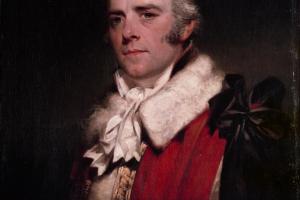 Returned for Buckingham on his brother’s interest, Grenville voted with the Opposition in the crucial divisions before the fall of North. Like his brother George, 3rd Earl Temple, he supported Rockingham’s Administration, and on the formation of Shelburne’s in July 1782 became chief secretary to Temple as lord lieutenant of Ireland. Edward Cooke, private secretary to Grenville’s predecessor, commenting unfavourably on the appointment of so young and inexperienced a man to lead the Irish House of Commons, nevertheless conceded that he seemed ‘sensible and perfectly well-disposed, and ... laborious’.1 In November 1782 he was sent to London to discuss Irish policy with the ministers, and during the next few months laboured to obtain a renunciating bill to allay Irish fears of English interference in their judicature. Cabinet divisions and procrastinations exasperated him: on 20 Dec. he wrote to Temple asking permission to remain in London till the bill was presented

to prevent their being frightened ... into any weakening of the preamble, and to goad them on to do something. For you see ... the objection was not so much to the taking any particular step, as to doing anything at all.2

And on the 24th about Shelburne: ‘Is it not inconceivable that a man will hazard so much ... without its being possible for one to discover any one object under heaven which he is to gain by the delay?’ During this period his only two reported speeches in the House were on Irish affairs. On 21 Jan. 1783 he at length felt able to report to Temple that ‘considering all the circumstances ... the whole has not gone off ill’.

After the publication of the peace preliminaries Grenville wrote to Temple on 6 Feb.:

I own I cannot think it so bad, all things considered ... and I see no reason for being at all confident that another campaign would have put us in a better situation to negotiate. In this line, I had intended to have stated my ideas on the day of debate in the House of Commons; but I am deterred by reading your opinions, and by a fear ... that you will take an active part the other way ... If it had not been for this, I think it would have had a handsome appearance in the hour of their distress.

Instead, in reply to a request from Pitt to move an address of approbation, he hedged: while he preferred ‘such a peace to such a war’ and felt ‘obliged to that Government, who have, at any rate, put a stop to the progression of evil’, it was ‘still too humiliating to Great Britain to admit of very sanguine expressions of exultation’, and he was very hesitant about moving such an address.3 In the end he avoided doing so, though he voted with Administration on the preliminaries, 18 Feb.

At the beginning of March, when Temple announced his intention to resign, Grenville followed, but with characteristic prudence restrained his brother from leaving the country ‘with an appearance of fretfulness and intemperance’ before the appointment of his successor. During the next few weeks, acting on Temple’s behalf, he saw the King several times and acted as a restraining influence on his brother’s impetuosity. On the 28th he reported that the King having referred to the possibility of Temple’s forming an Administration, he had pointed out the difficulty of finding a manager for the House of Commons. Various names were discussed but rejected, and, he wrote, as far as he himself was concerned,

even if equal in other respects, which I very unaffectedly know I am not, still I am much too young, and too little versed in the navigation of that tempestuous sea to venture out in such a hurricane as this.

On 1 Apr., informing Temple of the King’s acceptance of the Coalition, he obviously considered it a very temporary measure: the King, he wrote, was anxious

that those who act with us should hold themselves apart from such government, in order that he may have something else to look to whenever circumstances allow of it ... our ground I think clear—honourable to ourselves, consistent with our principles and professions, and holding out to us the fairest prospects of honest ambition.

On 20 Nov. 1783 Grenville attacked Fox’s East India bill. ‘In a speech of great length and greater ability’, wrote Wraxall,4 he ‘gave promise of those vigorous powers of mind which he has since unfolded.’

But though Grenville obtained office on the formation of Pitt’s Administration, he does not at first seem to have been active in the House: his only reported speech during the following critical months was on 22 Dec. 1783 to announce and defend his brother’s resignation. On 16 June 1784 he attacked the principle of parliamentary reform, though paying tribute to Pitt who, he declared, did not expect ‘a servile compliance with his particular sentiments on every great and important question’.5 He now spoke more frequently in the House; on 5 Apr. 1785 he moved for leave to bring in a bill to amend his father’s Act for trying controverted elections; and more than once defended Pitt’s Irish propositions. Wraxall, writing of 1785, declared that Grenville had

the second place in Pitt’s favour and friendship at this period of his political career. The ties of consanguinity cemented every other motive derived from mental endowments. Nature had bestowed on him no exterior advantages. His person was heavy, and devoid of elegance or grace, his manners destitute of suavity. Even his eloquence partook of these defects. In debate he wanted Pitt’s copious pomp of words, his facility and majesty of expression.6

Grenville now seems to have thought of applying for a peerage, but hesitated about leaving the Commons:

I am so much pleased with my present situation [he wrote to his brother, 12 Dec. 1786] that I am unwilling to quit it so soon ... I shall, I am confident in the next session, by the help of my present situation, be able to put myself much more forward in the House than I have hitherto done, which appears to me a great object to attain previous to accepting of what, after all, I fear, will wear the appearance of putting myself hors de combat. I am not in the same mind about it for any ten minutes together.

When in July 1787 war with Holland appeared imminent, Grenville was sent to the Hague to investigate, and shortly after his return in September, to Paris, to advise William Eden about the dispute. On 23 Sept. 1787 Pitt wrote to him: ‘Let me know what you think of all this. Even in these two days I felt no small difference in not being able to have your opinion on things as they arise.’7 On 1 Apr. the following year, on Lord Howe’s resigning the Admiralty, Grenville told his brother that Pitt had appeared much disposed to give him the office—

but I must confess my mind has never gone to it at all. The situation would unquestionably have been highly flattering to me at my time of life ... But ... I think it is not prudent for a person who has already been put forward beyond what many people think his pretensions entitle him to and who has still much way to make for himself, to incur the risk of shocking and revolting the feelings of almost everyone ... Besides I am unwilling—after having been endeavouring for four or five years to qualify myself, in some degree for almost any other line of public service—that my first ostensible debut should be in one where I should have the first ABC to learn.

He hoped eventually to obtain the Home Office, and had mentioned it to Pitt, who had replied he was unwilling to move Lord Sydney abruptly without being able to compensate him, ‘but that, whenever any such opportunity offered, he should willingly and eagerly embrace it ... I am by no means desirous that the interval should be so much shortened as to make the appointment immediate. I am in the train of making myself fitter for it.’ In the meanwhile Grenville hoped to obtain a reasonable sinecure post, and finding difficulties in securing a life grant of the master of the rolls in Ireland, finally settled for the reversion of the office of chief remembrancer. On 23 June 1788, reporting changes in Administration to his brother, he wrote: ‘For my own part ... the circumstances of my present situation in almost every point of view, particularly the confidence with which I am treated, leave me very little to look to, or to hope for, from any change that can arise.’ But in January 1789, on the death of the Speaker at the height of the Regency crisis, Grenville agreed to take his place.

Upon the whole, I think the decision I have made is clearly right [he wrote to Buckingham, 2 Jan.]. If the King recovers before Parliament is dissolved, it is clearly understood that my acceptance of this situation is not to prejudice my other views ... If the Regent goes on without dissolving, I am then in a situation which, though perhaps not perfectly pleasant, is nevertheless respectable, and will give me occupation. If they dissolve and carry the Chair against me in the new Parliament I do not see how I stand worse, in any respect, for having held this office.

He was elected on 5 Jan. on a party vote. On the 16th he made a long speech in committee supporting Pitt’s Regency proposals. Less than six months later he resigned from the Speakership, having at last obtained the office of Home secretary; the following year he went to the Lords, and as Lord Grenville achieved the highest office.

it was not merely the result of his ambition, but his amusement; the flowers of imagination, or the gaieties of society never seduced him astray. There was nothing to dissipate his ideas, and he brought his mind to bear on the subjects before him with its full force.