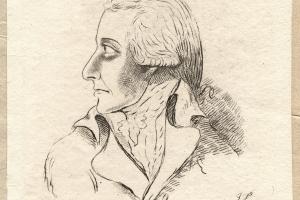 Philip Francis, senior, a clergyman of the Church of Ireland and translator of Horace, came to London about 1747, and from 1756 ‘almost lived at Holland House’,1 being chaplain to Lady Caroline Fox and employed by Henry Fox in pamphleteering and other confidential duties. In 1756 Philip Francis, junior, was given employment by Fox in the secretary of state’s office; in 1758, through the friendship of John Calcraft and Robert Wood, he was made secretary to General Bligh on the Cherbourg expedition; and in 1760 to Lord Kinnoull on a special embassy to Portugal. On his return he acted temporarily as amanuensis to William Pitt, and in 1762 became first clerk at the War Office, where he became a close friend of the deputy clerk, Christopher D’Oyly. When D’Oyly resigned this position in December 1771, Francis, three months later, followed his example in circumstances which remain exceedingly obscure, as does his whole conduct at this period. A case of some strength has been made out for his being the author of the anonymous letters of Junius published between 1769 and 1772; he was in close contact with John Calcraft, who was working for the return of Chatham to power during the Falkland Islands dispute 1770-1 (in 1771 Calcraft promised to return him for Wareham in the next Parliament) and he lost £500 in speculation on the outbreak of war over this incident.

His resignation and the death of Calcraft nine months later left him in serious straits, though Calcraft had left him £1,000 in a codicil to his will and instructed his executors to implement his intention of returning Francis for Wareham. In June 1773, however, he was offered a place on the council to the governor general of Bengal which was to be set up under North’s Regulating Act, a place which he owed chiefly to the failure to attract other candidates and the support of his former chief, Lord Barrington.

He left for India on 1 Apr. 1774, having persuaded Calcraft’s executors to let Christopher D’Oyly hold the seat at Wareham in his absence. He did not return until 19 Oct. 1781. During his service in India he became well-known for the leading part he took in the contest between the governor general, Warren Hastings, and the majority of his council, and for his virulent opposition to Hastings after the death of his two colleagues.2

On his return, with a fortune of over £3,000 p.a.,3 he devoted all his energies to the attempt to obtain the recall and disgrace of Hastings, at first hoping to achieve this through the North Administration, but soon throwing in his lot with those of the Rockingham Administration who were members of the select committee set up in 1781 to investigate Bengal affairs. Chief among them was Edmund Burke, with whom he was already acquainted, and over whom he acquired a great influence. Though shortly after his arrival he tried to enter the House,4 he did not obtain a seat until the general election of 1784, when he was returned for Yarmouth on the Holmes interest.

By this time a strong supporter of the Foxite Opposition, he at first confined his activities to East India affairs, making his speeches an opportunity to justify his own actions in India and to condemn those of Hastings. He first spoke on East India affairs on 16 June 1784, on the finances of the Company, made a long speech in the debate of 2 July, and was active in the debates on Pitt’s East India bill in the same month. He was prominent in the events leading to the impeachment of Warren Hastings and in the drawing up of the articles, but he was embittered by the refusal of the House on 5 Dec. 1787 to include him among the managers of the impeachment. From 1787 he took a considerable part in debates on a variety of non-Indian measures, supporting the Foxite Opposition in all major issues.

An ambitious, arrogant and vindictive man, his public life was undoubtedly, as he himself admitted, a failure, for which faults of character and lack of practical political acumen were responsible.