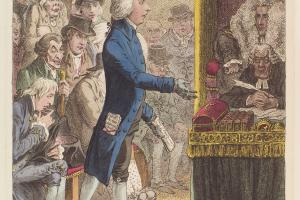 Addington had planned a legal career, but by 1782 he was developing a friendship with William Pitt; the two having first met in childhood when Addington’s father had been Lord Chatham’s physician. Their friendship was sufficiently advanced by the spring of 1783 for Charles Bragge to expect Addington to receive some official position ‘under the auspices of your illustrious friend’; but Pitt’s going out of office put an end to such hopes. These revived when Pitt returned to power: ‘Secretary, either official or confidential, I should wish you’, wrote Bragge on 30 Dec. 1783, but Addington received no appointment.1

About this time Addington was offered a seat in Parliament. ‘Whoever the gentleman was who made you that unexpected offer’, wrote his father, ‘you judged right in my opinion to decline it. I believe you are an enemy to corruption in all shapes, and as such have good reason to depend on an unbought seat in Parliament in case of a dissolution.’2 On 29 Jan. 1784 Addington wrote to Reginald Pole Carew: ‘If a dissolution had taken place, I had a flattering prospect of succeeding at— . That event is deferred, but I trust ... to no very remote period.’ The blank may in all probability be filled in as Devizes. Addington’s brother-in-law, James Sutton of New Park, had until 1780 shared its representation with its recorder, Charles Garth. In 1780 Addington had spent the summer there with the Suttons, and won general esteem; so much that, when Sutton decided to retire, ‘several of Mr. Sutton’s friends in the borough would indeed have preferred him as their representative to Sir James Long; but Mr. Sutton’s influence being already pledged in the baronet’s favour, Mr. Addington’s claims were not prominently paraded until ... 1784’,3 when, on the death of Garth, Addington was elected recorder,4 and at the general election Member with Long. His opponent John Lubbock, after an unsuccessful canvass, declined a poll.5

When Addington entered the House, according to his own admission, he knew personally only three Members. He was not eager to answer the expectations of his friends by becoming a conspicuous figure, and there is no record of his speaking before Pitt persuaded him to second the Address at the opening of the 1786 session: ‘I will not disguise that in asking this favour of you, I look beyond the immediate object of the first day’s debate, from a persuasion that whatever induces you to take a part in public, will equally contribute to your personal credit, and to that of the system to which I have the pleasure of thinking you are so warmly attached.’ Thomas Harley is reported to have said that ‘he had never heard an address so well seconded’.6 But Addington did not speak again until 2 May 1787.

Though a reluctant speaker in the House, Addington was a keen committee man; and it was generally expected that he would soon be given office. Still, his record was hardly such as to qualify him for the post of Speaker. Lord Graham, in proposing him to the House on 8 June 1789, remarked that although young, ‘his judgment was of full maturity’, and that his ‘very superior’ abilities were well-known to his friends.7 But his opponent, Sir Gilbert Elliot, with greater candour wrote on 6 June:8

Pitt could not have made a more obnoxious choice than this one. This is Addington’s first Parliament. He is son of Lord Chatham’s physician, and is in fact a sort of dependant to the family. The chair has hitherto been filled by persons of quite a different description, either eminent for abilities, experience, or rank, or of independent situations and characters.

Pitt’s friends allow that Addington is a very improper person for this office, and it has given great offence; but I do not believe this will make much difference to the event.

Addington’s conduct as Speaker, however, won the approbation of his opponents. In the debate on a motion for settling a salary of £5000 on the Speaker, 15 Mar. 1790, an amendment for increasing the amount to £6000 was carried by a very considerable majority; and Welbore Ellis, who in 1789 had proposed Elliot, declared that Addington ‘had completely fulfilled the expectations of his friends, and by his propriety and impartiality engaged and secured the general good opinion of the House’.9 Still, his appointment to the conduct of affairs in 1801 was regarded as a mere stop-gap.