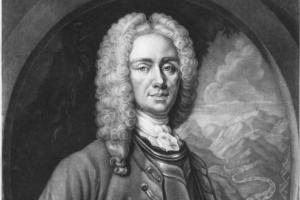 The grandson of a Cromwellian army officer, who settled in Ireland, Wade served with distinction in the wars of William III and Marlborough. Returned as a Whig for Hindon in 1715, he transferred in 1722 to Bath, where he had been stationed in the Fifteen rebellion, making his residence there and building up an impregnable position in the city, based on personal prestige. He even succeeded in polling all 30 votes in 1734, an unequalled feat. In this he was helped by the well-known Bath postmaster, Ralph Allen, who had married his illegitimate daughter and became so influential in the city and corporation that he was known widely as ‘the man of Bath’. There was no question of bribery though he spent money freely on charities, corporation feasts and the abbey, and had the portraits of the corporation painted at his own expense.

In Parliament Wade voted assiduously with the Administration, missing only one out of 14 recorded divisions between 1716 and 1746. He spoke frequently on army matters in support of the Government; when Pulteney complained, 27 Jan. 1732, that the British received far more pay than the French and Germans, he replied that ‘it is well known that what [the German army] come short of ours in pay they do more than make up by plundering, oppressing and raising contributions upon the countries where they are quartered’. He was capable of taking an independent line on other subjects. In opposing on disciplinary grounds an opposition motion, 13 Feb. 1734, that an officer not above the rank of colonel should not be removed except by court martial or an address of Parliament, he said:

Though I have generally joined in opinion with ... the Administration, yet I have likewise upon many occasions differed from them ... When the famous South Sea scheme was in agitation in this House, though it was brought in by a minister and strongly supported ... yet I had the honour to be one of the 55 who divided against it ... I had upon that occasion messages sent to me and was threatened to be stripped of all my military employments, but those threats had no weight with me.

On 28 and 30 Mar. 1737 he spoke on Sir John Barnard’s (q.v.) proposals for reducing the interest on the National Debt to 3%, unsuccessfully moving an amendment to substitute 3½ for 3.

For 16 years Wade was commander-in-chief in Scotland, where he opened up the Highlands by constructing 250 miles of military roads. He was responsible for putting down the Glasgow riots against the malt tax in 1725, when one of his officers was found guilty of murder by a local jury. With this in mind he defended the officer in command at Edinburgh for refusing to intervene in the Porteous riots without a written request from the magistrates, observing, in the debate on the bill for punishing Edinburgh, 16 May 1737, that had he done so ‘he might have stopped the riots but then he would have risked his life’, for ‘the aversion of the people of that country to the gentlemen of the army’ was so great that there was ‘no room to suppose he would have met with much favour ... had his conduct been brought to trial in the civil court’. He was for ‘making an example of the city of Edinburgh for the part her citizens acted in this inhuman affair.’

After the outbreak of war with Spain in 1739 Wade defended the Government’s proposals for raising new troops.1On 2 Mar. 1741 he spoke against a clause in a press bill providing that volunteers should be entitled to £6 a year for life, arguing that pressed men should share this bounty. In Jan. 1742 he was summoned to the last meeting of Walpole’s war cabinet.2 He was included in the court list of candidates for the secret committee on Walpole’s Administration, but was not elected to it.

In 1743 Wade, though old and asthmatic, was made commander-in-chief of the army in Flanders, impressing George II as ‘a very able officer but ... not alert’.3 Resigning early in 1745, he was called on to take command of the forces sent against the rebels, but was soon superseded. He died 14 Mar. 1748, leaving about £100,000, most of it to his natural children.4