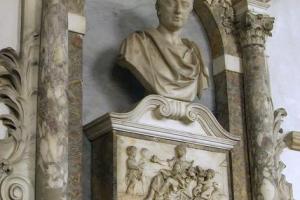 John Scrope was the grandson of Adrian Scrope, M.P., the regicide, whose estates, forfeited after his execution in 1660, were granted back to Scrope’s father in 1661.2 Said to have been in Monmouth’s rebellion in 1685, carrying intelligence to Holland dressed as a woman,3 he became a prosperous lawyer, giving up his practice in 1708 to accept a judicial post in the Exchequer court of Scotland.4 In December 1716 he was one of the judges appointed to try the Jacobite prisoners who had been brought from Scotland to Carlisle for trial in England. Entering Parliament unopposed for Ripon in 1722 on the Aislabie interest, he was appointed by Walpole to succeed William Lowndes at the Treasury in 1724, a post which he retained till his death.

In debate Scrope usually confined himself to money matters, on which he was short and to the point. His first recorded speech was on 7 Dec. 1724, when, in the committee of ways and means, he moved the duty on malt, ‘as usual with an exception to Scotland, with a hint that as they could not or would not pay the malt tax, there might be an equivalent’.5 In April 1727 he moved a vote of credit which was then tacked on to a malt bill. Transferring to Bristol in 1727, he ‘had a majority very near double to either of the others, for both Whig and Tory voted for him’.6 He was also successful at Winchelsea but opted to serve for his native city. In the new Parliament he spoke against a proposal, made in February 1729, to place a further duty of 6d. a gallon on malt ‘to discourage the pernicious use of spirits’, his grounds being that ‘he did not see how this consideration of making spirits could be brought into the malt bill, but thought it might deserve a particular bill.’ He spoke in February 1730 against receiving a petition from the African Company. Having presented a petition from the Bristol weavers complaining of the illegal export of Irish wool to foreign countries in February 1731, he was elected chairman of a select committee set up to consider this and other similar petitions, on whose recommendation he introduced a bill for taking off the duty on the import of Irish yarn into Great Britain. During the debates on the bill he opposed a proposal to take away the right accorded to Irish seamen of carrying 40 shillings worth of woollen goods, observing that the ‘liberty was given to prevent the seizing ships on every occasion, for before it was common to do so upon finding a single coat aboard’. In March 1732 he answered Pulteney’s objections to the revival of the salt duty. Next year he spoke for a clause in the sugar colonies’ relief bill prohibiting the importation of sugar into Ireland except through Great Britain, and a proposal to draw £500,000 out of the sinking fund for current expenditure.7 His voting for the excise bill and against the repeal of the Septennial Act in 1734 cost him his seat at Bristol in the general election that year, though he had the support of the common council.8 Walpole, however, through the interest of Henry Holt Henley, had found him another seat at Lyme Regis, where he was duly returned on the votes of the honorary freemen, among whom his ‘coachman came down from his box in his livery and voted for him.’9 Thereafter by patronage he obtained complete control of the borough. Two years later he was obliged to vote for a motion for the repeal of the Test Act, having been elected on condition that he would do so, though he disapproved of the decision to raise the matter in Parliament, which he attributed to the late Daniel Pulteney’s ‘design to distress Sir Robert Walpole’.10 When after Walpole’s fall the House of Commons set up a secret committee to inquire into his Administration, Scrope was summoned before the committee to give evidence as to the use of secret service money, but refused to take the necessary oath, stating

that he had laid his case before the King and was authorized to say ‘that the disposal of money issued for secret service, by the nature of it, requires the utmost secrecy, and is accounted for to his Majesty only; and therefore his Majesty could not permit him to disclose anything on that subject.’

Described by Horace Walpole as ‘a most testy little old gentleman’, who had pulled the nose of Micajah Perry during the excise bill debates, Scrope was ‘inflexible’, telling the committee

that he was fourscore years old and did not care if he spent the few months he has to live in the Tower or not; that the last thing he would do should be to betray the King and next to him the Earl of Orford.11

When the Duke of Bedford, who wanted Scrope’s post for Henry Legge, pressed for his removal on the ground that ‘all impartial persons must wish to see him removed’ from office, Pulteney answered that this was

absolutely impracticable. Mr. Scrope is the only man I know that thoroughly understands the business of the Treasury and is versed in drawing money bills. On this foundation he stands secure and is immovable as a rock; besides I really take him for an exceeding honest man.12

He did not resign with the Pelhams in 1746, but was allowed to retain his post on their return to office.

old Scrope ... died yesterday ... leaving a vast fortune to Frank Fane, he will have in all at least £2,000 a year in land and above £100,000 in money, all in his own disposal, without any entail on his brothers or even a recommendation.

On the same date Lord Hardwicke told Newcastle that he heard that Scrope’s fortune was ‘not so vast as people have imagined, he having dealt very little in the funds.’13