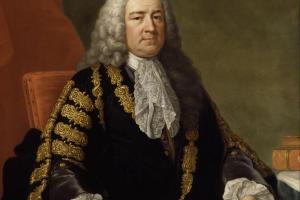 Soon after coming of age Pelham was returned for Seaford by his brother, the Duke of Newcastle, voting against the Government on Lord Cadogan in 17172 but with them on the repeal of the Occasional Conformity and Schism Acts and the peerage bill in 1719. He made his first reported speech 6 May 1720, when the reunion of the Whig party was marked by an address for discharging the civil list debt, which was moved by Pelham and seconded by Walpole. On 15 Mar. 1721 he helped Walpole to secure Sunderland’s acquittal by the House of Commons on a charge of taking bribes from the South Sea Company. When Walpole succeeded Sunderland as head of the Treasury in April, Pelham exchanged his court post under his brother, then lord chamberlain, for a seat on the Treasury board.

After Sunderland’s death in 1722 the Pelham brothers sided with Walpole against Carteret, who was replaced as secretary of state by Newcastle in 1724, Pelham becoming secretary at war. Promoted to the post of paymaster of the forces in 1730, he refrained from taking the perquisites, out of which others made great fortunes. Hervey describes him at this time as

strongly attached to Sir Robert Walpole, and more personally beloved by him than any man in England. He was a gentlemanlike sort of man, of very good character, with moderate parts, in the secret of every transaction, which, added to long practice, made him at last, though not a bright speaker, often a useful one; and by the means of a general affability he had fewer enemies than commonly fall to the share of one in so high a rank.3

In the House of Commons he acted as deputy to Walpole, who eventually adopted him as his political heir-apparent.

On Walpole’s fall Pelham automatically succeeded to the leadership of the old corps of Whigs in the Commons, whom he represented in the negotiations with Pulteney and Carteret. In the new Government he retained the paymastership, refusing the chancellorship of the Exchequer, though urged by Walpole to take it. When Pulteney elected to follow Walpole to the Lords as Earl of Bath, the leadership of the Commons devolved on Pelham, who thus found himself as paymaster at the head of the House of Commons, like Walpole before him, in each case for a short time.4

As head of the House of Commons, Pelham presided at the Cockpit meeting of government supporters before the opening of the next session, during which he did so well that it was settled that he should replace Wilmington at the Treasury before Parliament re-assembled in December 1743. On Wilmington’s death in July Bath applied for the post, but Pelham obtained it, much to the satisfaction of Walpole, now Orford, though he warned Pelham that Bath would try to secure a continuance of the existing Treasury board, containing a majority of his nominees, to ‘make, if he can, an arrant Wilmington of you’. However, the day after Pelham assumed office, John Scrope, secretary of the Treasury, reported that ‘he was as much at home there as if he had been at the head of that board for seven years’. When the King returned from Hanover in November, Pelham had no difficulty in arranging for the reconstitution of the Treasury board with himself as chancellor of the Exchequer as well as first lord, as Walpole had been before him.5

Though head of the Treasury and minister for the House of Commons, Pelham was still without the indispensable attribute of an eighteenth century prime minister, a superior interest in the Closet. This was possessed by Carteret, who had gained it by giving in to the King’s foreign views, at the cost of making himself and his ally Bath more unpopular in a year than Walpole had been after twenty.6 Relying on the royal favour, Carteret rode roughshod over his colleagues, saying of Pelham

he was only a chief clerk to Sir Robert Walpole, and why he should expect to be more under me I cant imagine. He did his drudgery and he shall do mine.

But Carteret had failed to take into account the effects of the precedent created in 1742, when the House of Commons had forced the King to give up Walpole. It was to avoid a repetition of 1742 that George II reluctantly agreed to part with Carteret, now Granville, in 1744. And when in 1746 Pelham with most of his colleagues resigned as a protest against their opponents’ continued influence in the Closet, they had to be recalled after a two days’ interregnum had shown that a Bath-Granville ministry could count on no more than 80 votes in the Commons, compared with 192 Members who went to Pelham’s levee to compliment him on his resignation. Though in appearance the King’s defeat had been effected by the resignation of ministers, its real cause in 1744-6, as in 1742, was that his chosen minister could not command a majority in the House of Commons. As Speaker Onslow said with satisfaction: ‘This Parliament has torn two favourite ministers from the throne’.7

On returning to office, Pelham set himself to preventing as far as possible a recurrence of what he called ‘the long Opposition which was permitted to go on for so many years that at length they were become the masters. I pray I may never see the like again’. Completing the operation begun when he brought the heads of the Opposition into the Government after Granville’s fall in 1744, he won over Pitt with a lucrative sinecure, Sir John Barnard by admitting him to the ring of underwriters of government loans, and Hume Campbell by a place for his brother and a pension for himself. Having thus taken the brains out of the Opposition, he caught them unprepared by a snap general election, which gave him a comfortable majority in 1747. The conclusion of peace in 1748 cleared the way to what he described as ‘my one selfish ambition’,

to have been the author of such a plan as might, in time to come, have released this nation from the vast load of debt they now labour under; and even in my own time to have had the satisfaction of demonstrating to the knowing part of the world that the thing was not impossible.

Next year he successfully introduced a scheme for reducing the interest on the national debt from 4 to 3 per cent, weathering a storm in the city of London, from which Walpole had flinched when a similar opportunity had presented itself in 1737. In 1750, depressed by defections to the Prince of Wales’s opposition, he wrote:

The House of Commons is a great unwieldy body, which requires great art and some cordials to keep it together; we have not many of the latter in our power; the Opposition is headed by the Prince, who has as much to give in present as we have, and more in reversion. This makes my task a hard one, and if it were not for that I should sleep in quiet.

This threat was removed by the Prince’s death in 1751, after which ‘opposition ... and even the distinctions of party ... in a manner ceased’.8 By this time Pelham had made his peace with George II, promising him

that I would never enter into any cabal again to prevent H.M. from either removing or bringing into his service any person he had either a prejudice against or a predilection for.

When in 1751 he offered to retire with the post of auditor of the Exchequer, a life sinecure worth £8,000 a year, which had fallen vacant, the King told him, instead of retiring, to hold it in the name of his nephew and son-in-law, Lord Lincoln. His favour excited the jealousy of Newcastle, who reported to Hardwicke, 6 Sept. 1751:

The King is very gracious, civil, and indeed familiar, both at the levee and in the Closet. His Majesty talks very confidentially upon foreign affairs, but is totally silent upon everything at home, and upon all employments that become vacant, upon which H.M. talks to nobody but Mr. Pelham, who sees him but once or at most twice a week, but then he has long audiences ... The truth is, that in fact everything passes through my brother’s hands, and I am with regard to the King as much a stranger as if I was not in the ministry ... Mr. Pelham is much embarrassed, inwardly pleased with his great situation at home and great affluence of fortune, got singly by the Court whenever he leaves it.

George II even came to compare him favourably to Walpole, who, he told Newcastle in 1752, ‘managed the money matters very ill; he did not indeed give money abroad, but he gave it away liberally at home’; adding ‘he was a great man, he understood the country; but that with regard to money matters, your brother does that, understands that, much better,’ no doubt referring to the fall of secret service expenditure from nearly £80,000 a year under Walpole to about £30,000 under Pelham.9

Though recognised as ‘the premier’, Pelham made no attempt to acquire Walpole’s position of ‘sole minister’. The ministry for practical purposes consisted of himself, his brother, and Hardwicke: as George II remarked in 1750, ‘they are the only ministers; the others are for show’. In this triumvirate, Pelham confined himself as far as possible to domestic matters, leaving foreign affairs to Newcastle, with Hardwicke as the receptacle of each brother’s complaints about the other. Thus Pelham complained to Hardwicke that Newcastle

always had a partiality and regard for the late Lord Stanhope. I know he thinks no minister has made a great figure but him in the two reigns. He will therefore imitate him as far as he can, and, I doubt, if he is not checked by somebody, will bring himself, if not his country, into the same distress that fertile but well-intentioned lord did before him.

Similarly Newcastle complained to Hardwicke that

Of all subjects my brother is the most uneasy when I talk to him upon that of elections. He will do everything himself—he consults none of his friends—he neither has time or patience to give it all the attention, alone, that such a great undertaking does require, and things arise which he did not expect. He is conscious that, nobody being consulted, nobody but himself can be blamed and that is what makes him sore when anything happens.

But on neither side was there any serious question of a rupture. As Pelham said:

The bottom of his politics and his brother’s too, for they must in the end be the same, ... was to choose a new Parliament, that should be a thorough Whig Parliament, all of a piece, such a one as might serve the King if he lived, and be steady to put the young King in the right way, if the old one died.10

Felix opportunitate mortis, Henry Pelham, ‘that often underrated minister’, died unexpectedly 6 Mar. 1754, on the eve of the general election for which he had been preparing, the first prime minister who ‘had the honour of dying a commoner’. To his contemporaries his chief virtue was that of setting an example of integrity in public life. ‘Let it be remembered’, Horace Walpole, no friend of his, wrote of him, that he ‘died poor’. And Chesterfield:

He wished well to the public and managed the finances with great care and personal purity. He was par negotiis neque supra, had many domestic virtues and no vices ... Upon the whole, he was an honourable man and a well-wishing minister.11