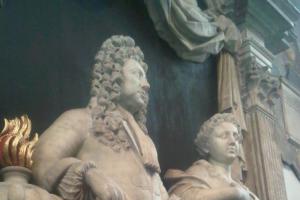 Squire’s father was described by a historian of York as ‘remarkable in our unhappy Civil War for his unwearied loyalty and courage’ in defence of the King. Squire himself, according to the same source, ‘practised the civil law’ as a proctor in York, where he rebuilt the Treasurer’s house, a very large mansion near the Minster. He embarked on a long and expensive lawsuit against Lord Wharton (Hon. Thomas*) over the ownership of valuable lead mines in the manors of Swaledale and Arkengarthdale, which he won before the Queen’s bench in November 1702 by producing the survey of the honor of Richmond and lordship of Middleham from the files in the court of Exchequer. Wharton petitioned the Lords for a writ of error and obtained an order for taking the surveys, with the details of the contested boundaries, out of the Exchequer to the Lords. At a second trial in Queen’s bench in November 1703, Squire was unable to produce the surveys of Richmond and Middleham and lost his case. These proceedings coincided with the outrage of the Commons at Wharton’s conduct in the case of Ashby v. White (see AYLESBURY, Bucks.). In this charged atmosphere the Commons resolved on 28 Jan. 1704 that the proceedings of the Lords over the record of the honor of Richmond and the lordship of Middleham were ‘without precedent and unwarrantable, and tends to the subjecting the rights and properties of all the commoners of England to an illegal and arbitrary power’. This provided moral satisfaction for Squire, but Wharton kept possession of the mines.2

Returned for Scarborough after a contest in 1705, Squire was classed as a ‘Churchman’ in an analysis of the new Parliament. He voted on 25 Oct. against the Court candidate as Speaker, but was not otherwise active in the House. He was a ‘zealous promoter’ of the Blue Coat School, York, a charity school established in 1705. He died intestate on 8 Oct. 1707, yet was included as a Tory in a list of the Parliament drawn up in early 1708. His monumental inscription in the church of St. Michael-le-Belfry, Petergate, York, describes him as ‘a man whose good nature, good sense and generosity rendered him most perfect in all the relative duties of life’. One of his daughters, Priscilla, married Bryan Cooke*, while his other daughter, Jane, was granted administration of Squire’s estate.3