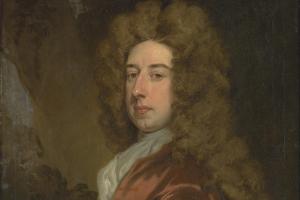 A solitary Whig in a family of High Church Tories, Compton stood unsuccessfully at East Grinstead in 1695, on the interest of his kinsman the Earl of Dorset (Charles Sackville†). He was eventually brought into Parliament three years later by Lord Cornwallis (Hon. Charles Cornwallis*) at a by-election for Eye, in all likelihood as a favour to Cornwallis’ grandfather Sir Stephen Fox*, one of whose daughters had married Compton’s elder brother, and who had thereafter taken a close and avuncular interest in the family’s affairs. It may have been through Cornwallis that Compton became connected at about this time with Lord Somers (Sir John*), to whose electioneering efforts at Reigate in 1698 Compton lent his assistance, acquiring a burgage there shortly before the poll. Classed as a Court supporter and for no accountable reason as a placeman in lists of the new Parliament in 1698, and also in early 1700 as being in the Junto interest, Compton took some time to make his mark in the House. On 13 May 1701 he appeared as a teller on the Whig side against addressing the King for an answer to the previous address for the removal of Somers and the other three Whig lords, and on 3 June 1701 was given leave of absence for three weeks to recover his health. Classed with the Whigs in Robert Harley’s* list of the 1701–2 Parliament, he was again a teller on 12 Feb. 1702, for leave for a bill to permit the poll for the Somerset county election to be held at Taunton and Wells. In the first session of the 1702 Parliament he managed a private bill, and voted on 13 Feb. 1703 in favour of agreeing with the Lords’ amendments to the bill for enlarging the time for taking the Abjuration. In the next session, he told on 10 Jan. 1704 against the wine duty bill. By now he had established himself among the more prominent Whigs in the Commons, his circle of political friends including John Smith I*, Lord Hartington (William Cavendish*), and not least Robert Walpole II*, to whom he was particularly close. It fell to Compton in October 1704 to press Walpole to come up to Parliament for the start of the session. Compton was also a member of the Kit-Cat Club. Forecast as likely to oppose the Tack, he duly voted against it or was absent on 28 Nov. In a list of about June the following year he was classified as a ‘Churchman’.1

Compton naturally voted for Smith in the division on the Speakership on 25 Oct. 1705, and was himself the Court Whig candidate for the chair of the elections committee on 7 Nov., when he defeated the Tory (Sir) Gilbert Dolben, subsequently reporting many election cases to the House. He supported the Court in the proceedings of 18 Feb. 1706 on the regency bill, acting as a teller in favour of one of the Lords’ amendments to the ‘place clause’. He was also a teller, with Henry St. John II, on 8 Mar., in favour of a Court-inspired motion to censure the pamphlet, A Letter from Sir Rowland Gwynne*, and reported from a conference with the Lords on this matter on 11 Mar. Some advice that he offered at about this time to the Earl of Dorset, then bound for Hanover, illustrates his own characteristic caution: warning Dorset to ‘tread carefully’, he suggested that because of recent parliamentary ‘differences’ over the ‘Hanover motion’ the best way to safeguard his position would be to ‘avoid making acquaintance with the agents of any party or faction here, or with any busy, intriguing person there’. Whether or not Compton followed his own counsel, he continued to make himself useful to government in the next session, and was first-named on 3 Dec. 1706 to the committee to give the thanks of the House to the Duke of Marlborough (John Churchill†). Soon afterwards he was spoken of as probable successor to John Grobham Howe* as paymaster of guards and garrisons. A teller on 27 Jan. 1707 for a motion vindicating the ministry’s conduct of the war in Spain, he also played a key role in carrying through the legislation to put into effect the union with Scotland. In February, he chaired the committee of the whole on the articles of union; was first-named to the drafting committee for the bill of union itself and subsequently chaired the committee of the whole on the bill; and was a teller against a Tory move for an additional clause to prevent the future imposition in England of any ‘oath, test or subscription’ inconsistent with the ‘government, worship and disciplines’ of the established Church (22 Feb.). The following month he was appointed paymaster of the Queen’s pensions and treasurer in the household of the Prince of Denmark. There were even rumours that ministers were considering him as a candidate for Speaker should Smith step down. Listed as a Whig in early 1708, he was one of the ‘Lord Treasurer’s Whigs’ who in the winter of 1707–8 stood by Godolphin and Marlborough against attacks from the rest of the Whig party. Included with Walpole and Hon. Henry Boyle* among those consulted by Godolphin and Robert Harley about forthcoming parliamentary business early in the session, he later joined in defending the Admiralty, and of course Prince George, from Junto-directed criticism. In November and December 1707 he chaired committees appointed to consider a Scottish merchants’ petition on the Union and those parts of the Queen’s speech concerning the Union. He was also a teller on 31 Jan. 1708 against an opposition attempt to adjourn discussion of a resolution to accept an advance from the New East India Company in return for an extension of its charter; on 24 Feb. against a Tory motion of censure on the ministry over the management of the army in Spain; and again on 17 Mar. in favour of passing the bill for the encouragement of trade with the plantations. During the session he also managed a private bill. On the resignation of the Harleyites in February 1708 Compton was talked of as a possible secretary at war. Although no new appointment materialized, he was involved in Godolphin’s schemes to set up a Court Whig candidate for Speaker in November 1708, which earned him the enmity of Lord Wharton (Hon. Thomas*) who said he believed Compton to be ‘of Mr Harley’s [party]’. When these schemes fell through, one Whig MP wrote:

now those that were engaged, as Smith, Compton and others, to be heads of a new ministry, and the managers of this Parliament, are prettily dropped, and can’t . . . be so well pleased in coming under those they had set at defiance.

Indeed, Compton was one of the slowest of the ‘lord treasurer’s Whigs’ to make his peace with the Junto. He was again classed as a Whig in a list compiled after the election.2

Whether because he remained a ‘Lord Treasurer’s Whig’ for another session, or out of a desire to atone for previous behaviour and impress the Whig Junto with his zeal, Compton was particularly active in the 1708 Parliament. Continued as chairman of the committee of privileges and elections, he was also a teller on the Whig side in a division on the Westminster election (24 Nov. 1708) and in December chaired the committee of the whole considering methods of recruiting the army, subsequently being appointed to prepare a recruiting bill which he introduced on 10 Jan. 1709 and managed through the House. On 29 Jan. he told in favour of William Thompson III* in the disputed election for Orford. He spoke on 5 Feb. in support of the motion for the general naturalization bill, and was listed as having voted for it. He was a teller four more times in this session: on 8 Feb. in a division over the Bewdley election; on 26 Feb. for a Court party amendment to a proposed address about the arrears of the land tax; on 8 Mar. for the Whig Thomas Meredyth* in the disputed Midhurst election; and on 10 Mar. with Walpole in favour of another Court motion, to declare that ‘timely and effectual care’ had been taken against the threatened invasion in 1708. In March and April he managed through the Commons bills to preserve parochial libraries, to preserve the privileges of foreign ambassadors, and for improving the Union. He also managed two private bills, one on behalf of Lord William Powlett*. In the following session Compton was nominated to the committee of 14 Dec. 1709 to draw up the articles of impeachment against Dr Sacheverell, later reconstituted as the committee to manage the impeachment. He told on 2 Feb. 1710 for agreeing with the ‘replication’ drafted by the committee appointed to consider Sacheverell’s answer. Other tellerships in this session were on 28 Jan. against committing, and on 2 Feb. against passing, the place bill, and he also managed the bill for the encouragement of learning through the House. In the proceedings against Sacheverell, he spoke on 1 Mar. 1710, seconding William Thompson III’s presentation of the case for the ‘Church in danger’ article. Compton ‘ran a long encomium’ on the Parliament which in 1705 had voted that the Church was not in danger, and in answer to Sacheverell’s comparison of this resolution with one in 1648 declared that ‘there was no resemblance between those times and these, but that the ministers, who should preach peace, turn trumpeters of rebellion, and incendiaries’. A Whig pamphleteer claimed that the speech was delivered ‘with skill and fidelity’, but a less sympathetic witness noted that Compton ‘showed so much inveteracy, and so much passion, that he trembled every joint, and almost foamed at the mouth’, at one point going so far as to refer to Sacheverell as ‘the criminal at your lordships’ bar’. Naturally, he was later listed as having voted for the impeachment.3

Compton was dropped by Lord Cornwallis at Eye for the 1710 election, either as a belated reprisal for his disloyalty to the Junto in 1707–8 or because of local difficulties in the constituency. In common with other managers of Sacheverell’s impeachment, he preferred not to risk his reputation in an electoral contest elsewhere. Under the new ministry of Robert Harley he kept his office of paymaster of pensions and in January 1711 was granted an annuity of £400 (backdated to September 1710) in consideration of past service as treasurer to Prince George. This he enjoyed until the summer of 1713, when he gave it up ‘voluntarily’, shortly before being replaced as paymaster by the man he had succeeded in 1707, his cousin Edward Nicholas*. He had himself acquired an estate in Sussex by this time, and in 1713 was returned for East Grinstead. He voted on 18 Mar. 1714 against the expulsion of Richard Steele, with whom he had previously been associated in the Prince’s household, and was classed as a Whig in the Worsley list and in two lists of the Members re-elected in 1715. After Queen Anne’s death he demonstrated his support for the new regime, moving a bill on 11 Aug. to continue the royal revenue and being named to the consequent drafting committee. The arrival of the new king did not bring immediate gratification, and he was said in October 1714 to have gone off into the country ‘dissatisfied’. The following year, however, he came into office and was chosen Speaker. Compton died on 2 July 1743.4