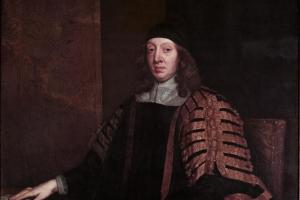 Grimston came from a cadet branch of an ancient Yorkshire family which had settled in Suffolk in the early 15th century, and produced a Member for Eye in the Armada year. His father, who sat for Harwich in the Long Parliament, was a Parliamentarian in the Civil War and a Presbyterian elder. Grimston himself, a lawyer, shared his father’s political and religious outlook and distinguished himself in opposition to Laud and the high church party. But, as one of those responsible for the treaty of Newport with the King, he was imprisoned at Pride’s Purge. After marrying the daughter of the most celebrated gentleman-artist of the time he bought Gorhambury from her first husband’s family for £10,000, and three years later his income was estimated at over £3,000 p.a.6

On the return of the secluded Members, Grimston was appointed to the Council of State and worked for the Restoration. At the general election of 1660 he stood unsuccessfully for Essex, but he was returned for Colchester on the corporation interest. Lord Wharton marked him as a friend, to be reserved to his own management. According to Clarendon his election as Speaker ‘was contrived by those who meant well to the King, and he submitted to it out of a hope and confidence that the designs would succeed’: but the Essex churchman (Sir) John Bramston was less happy about the choice:

Ere we got into the House ... they were seated (as they had contrived), and Mr [William] Pierrepont had named Sir Harbottle Grimston for Speaker, and they were conducting him to the chair before many others were come into the House.

Grimston was described by the Venetian resident as ‘a learned man, versed in affairs of state, upright, a Presbyterian but very moderate’. As Speaker it fell to him to answer the King’s letter, and to welcome him to London on 29 May. He served on the commission for the trial of the regicides, and was rewarded with a life patent for the mastership of the rolls. The profitability of this ‘very gainful employment’ was increased by a private Act enabling him to lease out his official property, which was rushed through under the chairmanship of the Hon. William Montagu. According to Burnet, for many years his chaplain at the Rolls, ‘he was a just judge, very slow and ready to hear everything that was offered, without passion or partiality’.7

As his office had long ceased to be incompatible with a seat in the Commons, Grimston again stood for Essex in 1661, but withdrew after the first day’s polling and was returned for Colchester. Wharton again listed him as a friend. But he was an inactive Member, making 22 recorded speeches and sitting on only 19 committees. In the opening session he was added to the managers of a conference on the security bill on 5 June, and two days later appointed to consider the bill restoring bishops to the House of Lords. He was the first to be appointed to a committee for regulating the fees of masters in Chancery, and on 10 July he served on a small committee to add a necessary proviso to the bill confirming the abolition of High Commission. He took no part in the Clarendon Code, but was among those appointed to bring in a bill against the growth of Popery in 1663. ‘A very pious and devout man’, according to Burnet, ‘he was much sharpened against Popery, but had always a tenderness to the dissenters, though he himself continued still in the communion of the Church.’ He was listed as a court dependant in 1664. In November of the same year a barrister named Bacon, who had had custody of his mother-in-law’s property, was convicted for ‘endeavouring’ Grimston’s death. He was involved in a painful dispute with Thomas Fanshawe in 1666, in which he was reminded of his Civil War record, but Clarendon poured balm into his wounds, and perhaps in gratitude he temporarily resumed parliamentary activity. His name again stood first in the list of the committee on the bill for regulating hospitals and schools, and he was also among those ordered to receive information about the increase in Popery. He was included in both lists of the court party in 1669-71.8

It was the autumn session of 1675 that marked Grimston’s move into cautious opposition. Listed as an official, he received the government whip in the form of a special letter from (Sir) Joseph Williamson. But in his first recorded speech of the Parliament, he supported the bill to prevent illegal exactions. He declared that ‘they do the King best service that resist and oppose these impositions’, and was accordingly named to the committee. In the debate on the state of the kingdom he called for the election of a new Parliament, adding, however, that he

would not bind the King. He has had some experience of this mischief. There is as great a mischief in the length of this Parliament as if there were no Parliament. A standing Parliament is as inconvenient as a standing army.

After the prorogation Sir Richard Wiseman advised that the lord chancellor should ‘conjure’ Grimston and his son, and when Parliament met again he weakly rejected the opposition contention that it had been automatically dissolved by the long recess. Nevertheless Shaftesbury accorded him the tepid rating of ‘worthy’. On 20 Feb. 1677 he opposed the building of 30 warships ‘till, like wise fathers in the case of children, we could tell whether we were able to support and keep them’.

He is against giving either supply or grievances the preference. He is for going the old Parliamentary way, hand in hand. ... But people’s purses will not be opened without redress of grievances. He may say that we have grievances, and heart-aching ones too. ... We must strengthen people’s hearts before we can lighten their purses.

On 3 Mar. he told the House that his colleague John Shaw was suing the borough of Colchester for his parliamentary wages, and he was the first Member named to the committee to free constituencies from this liability. The mayor thanked him warmly for his efforts, though the bill never achieved a second reading, and Shaw successfully extracted several hundred pounds from the corporation. Grimston was appointed to two other committees of legal interest in this session, those to take affidavits in the country and to prevent frauds and perjuries. The bill for educating the King’s children as Protestants aroused his old prejudices against the high church party:

He finds in this bill that there is an engrossing and appropriating the administration of this list to be given the King by the bishops exclusive to the Commons and peers of the realm. This power in the bill to the bishops is not in our power to give. It has been said that Parliaments are omnipotent; but as great as that power is there are things not in the power of Parliaments to give away.

On 4 Apr. he demanded that ‘the good laws’ against recusants should be put into execution, and his last committee in this Parliament was on a bill to expedite their conviction. He supported the first article of Danby’s impeachment on 21 Dec. 1678, declaring:

When once confidence is broken betwixt the King and his people, nothing tends more to the destruction of both, and they are the worst of men that have brought us to this pass that we have no trust at home. ... I say it was treason at common law before the statute of 25 Edward III, and this is a power reserved in Parliament by 25 Edward III to declare it treason now.9

Grimston continued to serve for Colchester in the Exclusion Parliaments. Shaftesbury again marked him ‘worthy’ and he was moderately active in 1679. He was appointed to seven committees and made 14 recorded speeches. When the King refused to accept Edward Seymour as Speaker he asked the House: ‘Shall we not have the liberty to choose our own servant fit for our own work?’. He attacked the Lords’ bill for Danby’s banishment, because it was not an attainder but a composition for the treason which the fallen minister had ‘confessed’ by his ‘flight’. He was appointed to the committees to consider the Lords’ amendments to the habeas corpus bill, and to prepare reasons on the illegality of Danby’s pardon. In debate he declared:

I think this pardon is void in several respects and therefore needs no bill for revocation of it. ... If this be admitted that the King can grant pardons thus, it is to no, purpose to complain; our mouths are stopped with a pardon.

He did not speak in the exclusion debate, but voted for the bill. Although Barillon regarded him as one of the most considerable Members of the House, in the second and third Exclusion Parliaments he was totally inactive, both in committee and debate. He died of apoplexy on 2 Jan. 1685 and was buried at St. Michael’s Church, St. Albans. Burnet began his epitaph:

His principle was that allegiance and protection were mutual obligations and that the one went for the other. He thought the law was the measure of both and that when a legal protection was denied to one that paid a legal allegiance, the subject had a right to defend himself.10