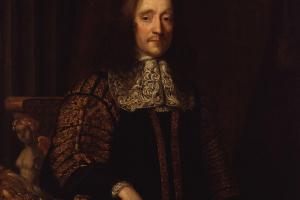 Annesley’s grandfather emigrated from Buckinghamshire to Munster. His father, who sat for Carmarthen in 1625, was subsequently created Lord Mountnorris in the Irish peerage. He was harshly treated by Strafford, but took no part in the Civil War, though he was appointed to the Yorkshire militia commission in 1648. A strong Presbyterian, Annesley was elected as a recruiter for Radnorshire in 1647, but was secluded at Pride’s Purge, and remained out of politics until the death of Cromwell. In March 1659 he was among those empowered by Charles II to treat with former rebels other than regicides, but with his habitual caution he escaped involvement in Booth’s rising. On the return of the secluded Members he became president of the Council of State and worked actively for the return of the Stuarts.3

Annesley and the 2nd Earl of Carbery married sisters, and with the support of the Golden Grove interest he was returned for Carmarthen at the general election of 1660. As a leading Presbyterian Royalist, he was intensely active in the Convention, making over 80 recorded speeches, sitting on 101 committees, in 16 of which he was chairman, and acting as teller in 13 divisions. He was the most frequent channel of communication between the Council and the House, and carried ten bills and ten messages to the Lords. On 1 May he reported that the Council of State had received a letter from the King, and helped to prepare an answer to that sent to the House and to manage the conference with the Lords on the settlement of government. He moved that Edmund Ludlow should be allowed to sit on the merits of his return, despite his uncompromising politics. Before the King’s arrival he led the committee to raise a loan in the City. He took the chair in the committee which drafted the instructions for the messengers to the King, and presented three reports on the King’s reception. In the ensuing months he was concerned with most of the crucial issues arising from the Restoration. He served on the committee for the bill of indemnity and oblivion, and reported a conference on securing the regicides. He helped to draw up the clauses of exception to the indemnity bill, though in debate he usually favoured leniency, for example, towards Philip Jones. On 25 June he demanded that proceedings against the intruded dons at Oxford should be stopped. He moved the vote of thanks to George Monck on 29 June. He wished to reject the motion of 2 July to disable all members of the High Court of Justice, decimators, major-generals and abjurors. On 11 July he carried the indemnity bill to the Lords together with Sir William Lewis, and, on its return with amendments to exclude regicides who had surrendered voluntarily, he said that ‘he would willingly do justice for the King’s blood and yet preserve the honour of the House’. About this time he acquired an interest in Hampshire by the purchase of the manor of Farnborough, but his petition for the enfranchisement of Overton was rejected without a division. As an Irish landowner he acted unsuccessfully as teller on 25 July against the duties imposed on Irish cattle imports. On 27 July he moved that the tunnage and poundage bill should be carried to the Lords. He led a committee for raising a further loan in the City on 13 Aug., and on 28 Aug. he acted as teller for a proviso to limit to regicide the charges to be brought against those excepted from the indemnity bill. On 4 Sept. he carried to the Lords the bill for settling ministers, later helping to manage conferences on this bill and on disbanding the army. On 11 Sept. he carried to the Lords the bill for annexing Dunkirk and Jamaica and reported amendments to the poll bill.4

During the recess Annesley took part in the trial of the regicides. He remained active when Parliament reassembled. On 6 Nov. he moved to refer the King’s declaration on ecclesiastical affairs to a committee of the whole House; but an ad hoc committee was appointed to bring in a bill to which he was named. He chaired the committee to consider the debts of the navy and army. He strenuously opposed the grant of excise as compensation for the loss of feudal revenues by which ‘every man who earns his bread by the sweat of his brow must pay excise to excuse the court of wards, which would be a greater grievance upon all than the court of wards was to a few’. Half the excise was granted in perpetuity, but Annesley acted as teller against the grant of the other half for the King’s life, which was defeated by two votes. On 23 Nov. he was appointed to insert clauses into the bill abolishing the court of wards in accordance with these resolutions. He was chairman of the committees for bills depending and for the Lords’ bill for annulling Interregnum grants.5

The triumph of the Cavaliers in 1661 inevitably saw a reduction in Annesley’s influence, though he was created Earl of Anglesey in the coronation honours and held high office at various times until 1682. From the Lords he continued to speak and act on important issues, notably the Irish cattle bill and Clarendon’s impeachment. He was concerned that the lord chancellor should be given a fair trial, and distrusted those who promoted his downfall. He lost his post as treasurer of the navy for his refusal to assist in the attack on Ormonde, and though his accounts were examined, no serious faults could be found. He voted for exclusion in 1680, believing that it was the ‘perversion of the Duke of York ... in point of religion [which was] the cause of all our mischiefs’. He was dismissed from office in August 1682, and took little further part in public affairs. He died on 6 Apr. 1686 and was buried at Farnborough.6

Anglesey was a man of some culture, with an antiquarian bent, and collected a fine library. To Samuel Pepys he was ‘a grave, serious man’. Burnet described him as ‘very learned, chiefly in the law. He had a faculty of speaking indefatigably upon every subject. ... He understood our government well and had examined far into the original of our constitution.’ But Burnet also wrote of Anglesey’s many faults, declaring that he ‘stuck at nothing, and was ashamed of nothing’. Ormonde too stated that he was ‘a man I have seen detected in public of misinformation and mean artifices, for sordid sums, and yet never blush at the matter’. In general his detractors emphasized his selfish desire to obtain lucrative offices. Although he conformed to the established Church, Anglesey remained a Presbyterian in private life, and his diary is strongly Puritan in tone.7