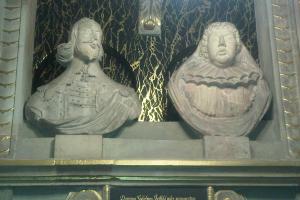 Sheffield was distantly related to lord president Sheffield, but his links went deeper than mere consanguinity: his great-aunt, Magdalen Frodsham, had spent years in the service of Lord Sheffield’s mother; while in 1615 he married the widow of one of the president’s sons.12 Presumably nominated for a seat at Hedon by Sheffield in 1614, he played no recorded part in the Addled Parliament, and with Sheffield out of office in 1621, he was not re-elected. He found another seat at Thirsk in 1624, probably by agreement with Sir Thomas Belasyse*, uncle of Lord Sheffield’s son-in-law Sir Ferdinando Fairfax*. He may, like Lord Sheffield, have supported a war against Spain; but his only appearance in the Journal occurred when he was added to the committee for the scandalous ministers’ bill (1 May 1624). In 1625 he was replaced at Thirsk by Henry Stanley, and he did not stand for Parliament again during the period, although he recommended his wife’s cousin Henry Darley* for election at Scarborough in January 1626.13

Although not notably godly, Sheffield was one of those removed from the Northern recusancy commission in 1630, when its aims became fiscal rather than punitive. In 1634 he spent his second honeymoon at the Fairfax house in York, from where he lamented the news of the Protestant defeat at Nordlingen. It was perhaps with the encouragement of his Fairfax relatives that he signed the Yorkshire petition against billeting in July 1640, and three months later he was one of the unsuccessful candidates at Scarborough in the election for the Long Parliament.14 With no immediate family, he determined to leave England on the outbreak of the Civil War, obtaining a passport from the Lords to travel for his health on 26 Dec. 1642. Falsely representing himself as an MP, he was detained by the Kentish radical Sir Michael Livesey† at Gravesend, but was given leave to proceed to Rotterdam on 25 Feb. 1643.15

Settling among the English community at Delft, Sheffield apparently remained sympathetic to the parliamentarian cause, warning Sir Ferdinando Fairfax of a plot to raise the North for the king in May 1646. In his will of 16 Apr. 1644, he left Mowthorpe manor (worth £117 per annum) to his stepdaughter’s child, and lands in the open fields at Epworth (annual gross value £26) to trustees for maintenance of the village schoolmaster. He named Fairfax and Sheffield, now earl of Mulgrave, as his executors, but on 25 Oct. 1646, after Mulgrave’s death, he nominated an English merchant at Rotterdam in his stead. He died the next day, the will being proved in London on 1 Dec. following.16