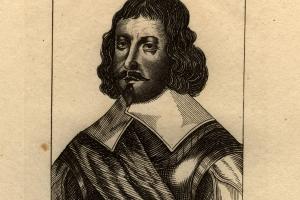 Greville was the son of an obscure Lincolnshire squire. His prospects were transformed at the age of four, when his childless distant cousin, Sir Fulke Greville, adopted him as his heir. His grooming for this role included a careful education; indeed, according to Anthony Wood, he received some tuition at Cambridge University. When Sir Fulke was elevated to the peerage in 1621 as Baron Brooke of Beauchamp’s Court, his patent specified that Greville should inherit the title if Brooke died childless.16 In 1624, aged about 17, he began a three-year tour of the Continent which took in The Hague, Paris, Geneva, Venice and Savoy. His encounters with Dutch Protestantism and Italian Catholicism apparently steered his religious tastes decisively in a puritan direction. It may also be significant that he was in Leiden at the same time as John Robinson, the promoter of early puritan colonizing ventures in America such as the Mayflower voyage.17

In early 1628 Greville was elected to Parliament at Warwick, where Lord Brooke was the dominant patron. On 4 Apr. he joined in the debate on supply, arguing for a grant of five subsidies and urging that recusants should be made to pay a double share. However, his return was voided on 31 May, following an inquiry into the Warwick election. By the time a by-election was held, Greville had become the 2nd Lord Brooke, and took his seat in the Lords instead.18

During the following decade Greville mixed extensively with other puritan peers. He married a daughter of the 4th earl of Bedford, and became closely associated with the 2nd earl of Warwick (Sir Robert Rich*) and Viscount Saye and Sele through his involvement with the Providence Island Company. The town of Saybrook, Connecticut commemorates a joint colonizing venture in 1635.19 Like Saye, Greville was an outspoken critic of the First Bishops’ War, and both men were briefly confined at York in the spring of 1639 for refusing to take an oath of loyalty to the king. Greville was arrested again on account of his obstreperous behaviour during the Short Parliament, though his public profile also prompted his selection as a commissioner to treat with the Scots later that year.20 In 1640-1 he penned two pamphlets promoting the cause of sweeping religious toleration. Appointed the parliamentarian lord lieutenant of Warwickshire in February 1642, he emerged as a vigorous military commander during the early months of the Civil War, rallying the county militia to his side, and fighting at Edgehill. In December he was placed in command of the new Staffordshire and Warwickshire Association, but while on campaign in March 1643 he was killed by a sniper during the siege of Lichfield. He was buried at St. Mary’s, Warwick, alongside the 1st Lord Brooke. His youngest son, Fulke, sat for Warwick after the Restoration.21