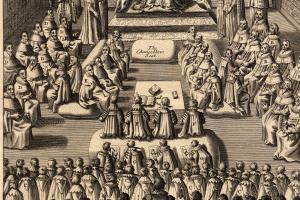 Elizabeth hated summoning Parliaments and the decision to do so barely a year after the dissolution of the last assembly was forced upon her by the Privy Council in order to deal with the aftermath of the Ridolfi plot, a Catholic conspiracy to put Mary Stuart, Queen of Scots, on the English throne. The first session was the only meeting of Parliament during Elizabeth’s reign in which there was no request for supply. A former troublemaker Robert Bell, MP for King’s Lynn, was appointed Speaker. In addition to the Commons Journal separate diaries of the first session were kept by the clerk Fulk Onslow, an anonymous Member, and Thomas Cromwell, though only the latter provides a comprehensive account of the Commons’ proceedings across all three sessions.

On 13 May 1572 at a joint committee of both Houses the Privy Council presented their case against Mary Stuart, Elizabeth’s cousin, who had been under house arrest in England since fleeing Scotland in 1568. The main allegations were that Mary had claimed title to the English crown for herself and her son James; had attempted to force the duke of Norfolk to marry her in order to strengthen this claim; had stirred up and aided rebellion in the north of England; and had with the assistance of the Pope’s secret agent Roberto Ridolfi incited the duke of Alba (governor of the Spanish Netherlands) and Philip II of Spain to invade both England and Ireland and overthrow Elizabeth.1 The Privy Council wanted Mary to be tried for treason as if she were an English subject; but Elizabeth refused to consider such a solution. With the exception of Arthur Hall, MP for Grantham, who spoke up in favour of leniency and was censured by the Commons as a result, there was almost universal parliamentary support for a petition that Mary be condemned to death.2 However, Elizabeth responded on 28 May with instructions to instead proceed with a bill excluding Mary from the English succession.3 She did finally authorize the execution of her second cousin Thomas Howard, 4th duke of Norfolk, who had already been convicted of treason and attainted in January 1572 for his role in the Ridolfi plot; he went to the scaffold on 2 June.4 The bill against Mary passed on 25 June after extensive debate only to be rejected by Elizabeth at the prorogation.5

The queen’s safety dominated proceedings at the expense of other business to the extent that only 14 Statutes and 3 private measures passed at the end of this session. Religious debates were thwarted by an intervention from Elizabeth on 22 May forbidding bills of religion to be brought into the Commons without the prior approval of the bishops.6 One significant piece of social and economic legislation was the enactment of a revised poor law, replacing that of 1563 which had lapsed in 1571.7 Many other bills expired due to lack of time. Much more legislation was processed during the second session, which although it lasted only 31 working days produced over 100 bills, of which 37 were enacted. These included a conciliar measure to reduce unemployment, and an Act against informers. Supply requested by the Chancellor of the Exchequer Sir Walter Mildmay, sitting for Northamptonshire, was freely granted in 1576 and again in 1581.8

The liberties of the Commons were brought into the spotlight at the opening of the second session by Peter Wentworth’s famous defence of freedom of speech on 8 Feb. 1576, for which he was sent to the Tower by the Commons.9 Arthur Hall also caused controversy once again by attempting to claim privilege for his servant in highly dubious circumstances. Wentworth was readmitted on Elizabeth’s orders on 12 March. Her magnanimity in the matter then prompted the Commons to petition her ‘to encline herself to a mariadge, whereby shee having children, we might stande in some surety’. This presumably referred to her latest courtship by Francis duke of Alençon, although Elizabeth was by now 42 years old and any settlement of the royal succession upon heirs of her body seemed increasingly unlikely.10 The Commons had petitioned earlier in the session for reform of church discipline and received a gracious though typically noncommittal reply.11 Further pressure for religious reform was brought to bear on Elizabeth in the third session with a renewed petition concerning ecclesiastical causes, although the bishops dismissed several points therein as ‘a pece of TC his platforme’, referring to the notorious Puritan Thomas Cartwright.12

The recall of Parliament in January 1581 had again been prompted by the Catholic threat, this time in the form of seminary priests and the Jesuit mission.13 Speaker Bell having died in the interim another former rebel, John Popham, MP for Bristol, was appointed as his replacement. When it was discovered that an unrepentant Arthur Hall had published a pamphlet about his former privilege suit he was expelled from the Commons and sent to the Tower. 14Major legislation passed in 1581 included an Act against sedition, and a new Navigation Act that was in fact sponsored by the Great Yarmouth herring industry. A total of 17 Statutes and 13 private measures received the royal assent before the session was once more prorogued; without meeting again it was belatedly dissolved two years later on 19 Apr. 1583