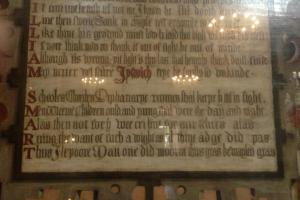 Smarte was a member of the corporation of Ipswich for almost 40 years, his bequests to drapers’ and tailors’ halls in the borough suggesting that he may have beeen connected with the cloth trade. He owned considerable land in Suffolk and Essex, and the Ipswich treasurers’ accounts for 1594-5 record a purchase of rye from him to be

baked in bread at the town’s charge and given to the poor of this town the day before the coronation day ... 1594.

For many years he was treasurer of Christ’s hospital, Ipswich, and leased property from the corporation, the rents of which were allocated to the hospital. He also carried out a number of commissions for the borough—meeting the lord keeper when he visited Ipswich in September 1578, surveying a passage-way on behalf of Henry Tooley’s foundation, and in 1593 conducting a lawsuit against a certain Thomas Bennet, for which the borough treasurer paid him £23 6s. 8d. He was also active in suits brought by individuals against the corporation itself. For his parliamentary service, ‘fee and diet’, in 1589 he was paid £6.

He died on 23 Sept. 1599 and was buried in the parish church of St. Mary Tower. A monument to him was set up in the church—a framed wooden tablet with an acrostic inscription in rhyme and a view of Ipswich. His will, drawn up in January 1599, was proved in the following November. It shows him as a considerable benefactor to the town. His wife, the sole executrix, was to have a dwelling-house.