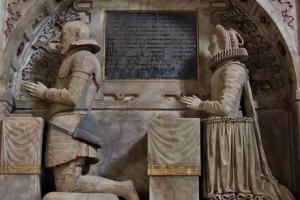 Dormer succeeded in 1575 to the considerable lands of his father in Buckinghamshire and elsewhere, together with a fortune estimated by the Spanish ambassador to amount to 100,000 ducats. At the end of his life he was able to pay between £8,000 and £10,000 for his peerage, and still to leave large estates to his grandson and heir. This is the more remarkable as (though both he and his father must have conformed) he had strong Catholic sympathies. His half-sister was Queen Mary’s most intimate companion and married the Spanish ambassador, Feria. The explanation seems to lie in Sir William Dormer’s friendship with the extreme puritan magnate the and Earl of Bedford, who in 1570 was reported to be about to arrange Robert Dormer’s marriage. The Dormer exiles, however, managed to veto this, and he married instead into the Catholic Montagu family. Bedford was presumably responsible for the continuing freedom of the family from the penal measures, and was very probably Dormer’s patron at Tregony in 1571. As knight for Buckinghamshire in 1593 he was eligible to attend the subsidy committee (26 Feb.) and a legal committee (9 Mar.).3

Dormer died 18 Nov. 1616, a month after his eldest son, and was succeeded by his infant grandson Robert, later Earl of Carnarvon, to whom, by his last will made two days before his death, he left the bulk of his property. As executors he appointed Sir John Dormer and Sir William Borlase, as overseer the lord chancellor, Thomas Egerton I, Lord Ellesmere. The executors, though reluctant to perform ‘such a busy piece of business’, proved the will 5 Dec. ‘If he were alive they would not do half so much for him for all the means and entreaty he could make.’4