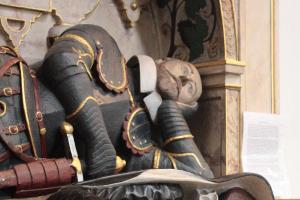 Denny was a younger son who became a soldier, courtier and colonist. He was a godson of Edward VI, and Lord Burghley was a friend and neighbour of his family. At the age of 27 Denny received some sort of promise of employment in Ireland with the 1st Earl of Essex. Having, the story goes, mortgaged his house in order to equip himself and waited in London for some months, he was left without employment. His next venture, a voyage of discovery with his cousins Sir Walter Ralegh and Sir Humphrey Gilbert in 1578, also came to nothing, and finally, having hung about the court and indulged in some privateering, Denny went to Ireland in command of 100 men, so beginning a life-long connexion which finally ruined him. As early as 8 Sept. 1580 he complained to Walsingham that the people were ‘such as Satan himself cannot exceed in subtlety, treachery and cruelty’ and within weeks he returned to England. Back in Ireland in January 1581, he led an expedition against the O’Tooles that summer, bringing the head of Garret O’Toole to Dublin, and being formally thanked for his services by the Queen. Next he went to court and married a lady of ‘great beauty and parts’, whose father brought him into the 1584 Parliament for Liskeard, after he had unsuccessfully attempted a Hertfordshire county seat. After the end of this Parliament and before February 1587 Denny went to Ireland again. He received another military command, and a 6,000 acre estate in Kerry which he was supposed to develop and settle with English, and thus he became an ‘undertaker’. That September the master of the rolls in Ireland told Burghley that Denny ‘had put his plough deepest in the ground and I cannot but recommend him to your good favour’. But Sir William Herbert, another undertaker, told Burghley that Denny ‘measured conscience by commodity’. Denny claimed that no persuasion would ever win over the Irish and that justice without mercy must tame them. If a sharp example had been made earlier, 10,000 lives might have been saved and the Queen’s purse spared. As for Sir William Herbert, he used matters in Kerry for ‘his glory’s sake’; he had appointed constables such that ‘if one raked hell one could scarce find worse, and a fat conceit hath fed him foolishly’. About October 1589 Denny returned briefly to England with despatches and possibly to make a verbal report to the Queen. In 1591 she sent him to sea to relieve Lord Thomas Howard in the Azores, an expedition which cost him £1,000 and completed his financial ruin.3

There is no proof that it was this Sir Edward Denny who was elected knight of the shire for Westmorland in 1593 after, apparently, another attempt at Hertfordshire, rather than his nephew and namesake, later Lord Denny of Waltham. He is not known to have been abroad at the time of the Parliament, and his connexion with the 2nd Earl of Essex and also with the 3rd Earl of Cumberland makes him the likelier candidate. No activity by Denny has been recorded in the journals for any of his Parliaments. The knights of the shires were on the subsidy committee of 26 Feb. 1593 and a legal committee 9 Mar. In 1597 Denny was returned for the Cornish borough of Tregony, probably on the nomination of his relation, Hugh Pomeroy. It was possibly after the dissolution of this Parliament that he returned to Ireland, ‘in very lamentable sort’, the rebels having devastated his Irish property, land, houses, corn, cattle, and horses. For all his services, his wife complained, Denny had received nothing but a few sinecures, and, like other disappointed courtiers, Denny now turned to the end Earl of Essex, who was in Ireland as lord deputy from April to September 1599. Before he could be seriously compromised, late in 1599 or early in 1600, he ‘took a deadly sickness in his country’s service’, dying 12 Feb. 1600 and being buried in Waltham abbey on the 14th. Denny’s monument, erected by his wife in spite of her poverty, shows him in full armour clasping a sword, and with a plumed helmet by his head. His epitaph describes him as having been religious, wise, just, liberal, right valiant, most active, learning’s friend, pride’s foe, kindly, loving and much beloved. An inquisition post mortem was taken at Bishop’s Stortford 13 May 1600. His widow attributed the Queen’s indifference to her and her children’s misery to Denny’s decision ‘to follow my lord of Essex’.4