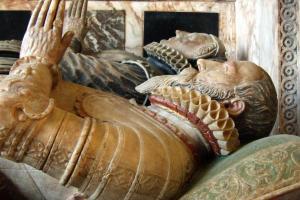 The son of a civilian and father of two common lawyers, Croke lived as a country gentleman, using his legal training to compile a ‘great written book’ of his lands and lawsuits. His family had been established in Buckinghamshire since the fifteenth century. From his father he inherited a number of estates including the manors of Chilton Easington and Addingrove. His Oxfordshire estate of Studley priory he conveyed in trust to his eldest son in 1583. He was left out of the commission of the peace in Buckinghamshire in 1562, for an unascertained reason: presumably not religion, as he was described by his bishop two years later as earnest in religion and fit to be trusted.2

Nominated by the chancellor of the duchy of Lancaster in 1563 for Monmouth Boroughs, but not returned, Croke was elected for his county in 1572. No activity is recorded in Croke’s name for the first session of the 1572 Parliament. However, in 1576 he was one of those who asked for a petition to be drawn up, urging the Queen to marry (9, 12 Mar.), and he also served on the committee which met to decide the form the petition was to take (12 Mar.). He served on three other committees in this session: concerning letters patent (25 Feb.), church discipline (29 Feb.) and justices of the forest (8 Mar.). In the 1581 session he was a member of the committee on the bill against slander and seditious rumours concerning the Queen (1 Feb.), and of the committee to draft a bill for safeguarding the Queen’s honour and person (14 Mar.). He also served on the subsidy committee (25 Jan.), and on committees concerning the preservation of woods (28 Jan., 3 Mar.), hunting (9 Feb.), the preservation of game (18 Feb.), and London merchants (2 Mar.).3

Croke died 10 Feb. 1608. His will, made 2 July 1607 and proved 30 May 1609, was concerned mostly with bequests of jewelry, plate and household stuff to his family, including his ‘sister-in-law’ Lady Harington, wife of Sir John Harington II, and to Sir John Tyrell. He left a number of charitable bequests and provided an income to enable Randall Eaton, the minister and preacher of Chilton, to remain there while Croke’s widow and executrix was alive.4