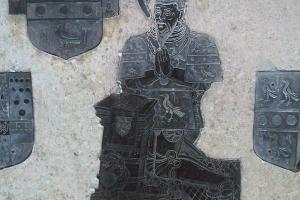 John Tregonwell’s parentage has not been established and may have been humble. Between 1512, when he appears as a student of civil law at Oxford, and 1530, when he was succeeded as principal of Peckwater Inn by William Petre, his progress at the university was scarcely affected by demands from outside it, but his entry into practice at the court of Admiralty was quickly followed by his employment by the crown in the matter of the divorce and other, chiefly diplomatic, tasks. In April 1533 he supervised the proceedings of convocation and a year later his expectation of the mastership of the rolls was dashed by Cromwell’s appropriation of the office, but by 1535 he was principal judge in the Admiralty as well as a master in Chancery. He played a part in the proceedings against Sir Thomas More, Anne Boleyn and the rebels of 1536.4

Tregonwell is chiefly remembered for his part in the dissolution of the monasteries. In April 1533 he had been instrumental in the election of an abbot of Tewkesbury, and he was one of the three men, Cromwell being another, to whom a draft commission to visit monasteries and churches was addressed before the close of 1534. After his visitation of Oxford university in September 1535 Tregonwell’s work lay mainly in the south-west, including his own county. He has been called perhaps the most reliable and the most independent of the visitors, one who was prepared to plead for a house which he judged deserving, but he was also among the first to compete for the spoils. His importunity seems to have yielded only a lease of the nunnery of St. Giles at Flamstead, Hertfordshire, and even then the manor was soon afterwards granted to Sir Richard Page. Tregonwell’s chief acquisition, Milton Abbas, cost him £1000 in February 1540; to this he and John Southcote of Bodmin (presumably his nephew) added in October 1544 other properties, also mainly in Dorset, for a total of nearly £900, although some of these they promptly resold. Tregonwell’s advent in Dorset offended John Horsey, from whom he looked for protection to Cromwell, but the friction may not have lasted since both men were asked by Sir Giles Strangways I to assist in the execution of his will. When he married (probably as his second wife) the widow of a Dorset squire Tregonwell linked himself with some of the county’s leading families.5

As a master in Chancery Tregonwell was four times commissioned to hear cases in the chancellor’s stead, in 1544 and 1547 under Wriothesley (who on the second occasion was dismissed for issuing the commission without warrant), in 1550 under Rich, and in 1555 after the death of Gardiner; in the last two commissions he was joined with his son-in-law Sir Richard Rede. It was in virtue of the same office that Tregonwell was appointed a receiver of petitions in the House of Lords in three of Henry VIII’s Parliaments and four of Mary’s, but he is only known to have sat once in the Commons, in the first Marian Parliament. His election on that occasion for Scarborough, revealed by a copy of the Crown Office list, must be ascribed to government influence, although he had a local connexion through the archdeacon of the East Riding, John Dakins, with whom he had been an executor for Bishop Knight of Bath and Wells. Tregonwell’s enjoyment of the Queen’s favour was shown by the knighthood conferred on him at her coronation, by his appointment as sheriff while Parliament was sitting, and later by his admission to the Privy Council.6

Tregonwell was named to two committees appointed by the Commons to determine whether Alexander Nowell and John Foster II were eligible to sit there. His choice for the first committee, appointed on 12 Oct. 1553, goes far towards answering two questions about Tregonwell, whether he was in orders and whether he had sat in Parliament before. The nature of the disability urged against Nowell and Foster, namely, their clerical status, would surely have ruled out anyone open to the same objection, and no evidence has been found to support Froude’s statement that Tregonwell’s prebend at Westminster called into question his own right to sit. (By the same token, it must have been as a lay holder that he was granted the Cornish living of St. Issey and the rectory of Hope All Saints, Kent.) The business of the committee also called for parliamentary experience, and with five of its six members able between them to recall every Parliament since 1539 it would have been strange if Tregonwell had been the sole newcomer; the many gaps in the roll of Members of these Parliaments make it possible that he had sat in more than one of them and his official standing could have led to his nomination for almost any borough amenable to government influence.7

What part Tregonwell played in this committee remains unknown, but after it had reached a decision in Nowell’s case he was the only one of its members to be named to the further one charged with considering Foster’s. This was a smaller and more specialised group, consisting of three civil lawyers, and Tregonwell was evidently included in it to maintain continuity. Unlike its precursor it left no further trace in the Commons Journal, so that Foster (who was a kinsman by marriage of Tregonwell) presumably kept his seat. On the day this committee was appointed Tregonwell had a bill for the repairing of Sherborne causeway committed to him after its second reading.8

Tregonwell’s shrievalty may have prevented his re-election to both the Parliaments of 1554, but although eligible thereafter he was not to sit again in the Commons; it may be that his regular appointment as a receiver of petitions in the Lords was a deterrent, although this duty he discharged concurrently with his Membership in October 1553. Neither before nor after 1558 would religion have been a stumbling-block; he had not opposed the Marian Restoration, but he was to be made a justice of the peace under Elizabeth. That he remained a Catholic is evident from his will of 3 Dec. 1563, with its invocation of the prayers of the Virgin Mary and all the company of heaven, and its requirement that the recipients of a charitable bequest should pray for the souls of the testator, of Bishop Knight and of all Christians. Tregonwell named as executors his wife and his grandson and heir, another John, and as overseers his brother-in-law Sir William Keilway, his son-in-law Sir Richard Rede, his nephew John Southcote II, his kinsmen Nicholas Martin and John Wadham, and William Straken. He also asked his ‘especial approved good friend’ Sir William Petre to assist with good counsel; Tregonwell had been continuously associated with Petre for more than 30 years.9

Tregonwell died at Milton Abbas on 13 Jan. 1565 and was buried in the abbey church, where his monument remains. His grandson, who became the ward of Sir Arthur Champernon, had licence to enter on the inheritance in July 1571. A Dorset kinsman, George Turberville, wrote of Tregonwell’s death,

And Dorset thou may’st cry

For the one hath bred, the other lost