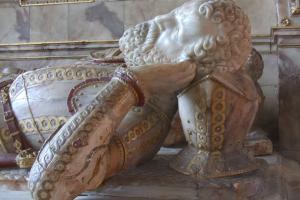 Sir Philip Hoby’s grandfather Walter Hoby hailed from Radnorshire, and the family itself was of ancient Welsh descent from Rhys ap Tudur. It was Hoby’s father who was the first to settle at Leominster.4

In 1548 the imperial ambassador in England, Van der Delft, reported to his master on Hoby, who had just been named ambassador to the Emperor: Hoby, he wrote, had gained the favour of Henry VIII by his skill in languages and had been used by the late King in the entertainment of foreign guests. He also possessed, it seems, the right temperament for diplomacy. In 1551 another imperial ambassador, Simon Renard, described a conversation with Hoby in which they exchanged courtesies: Renard had met fair words with fair words, but Hoby’s face and drawling tone made the writer suspect that he was the sort of man who thought one thing and said another.5

Where Hoby acquired his fluency in foreign languages is unknown. He may have studied at a university, as his younger half-brother Sir Thomas Hoby was to do, but there is no evidence of this. He is first glimpsed during 1535-6 travelling as an envoy in Spain and Portugal. He had probably entered diplomacy through Cromwell, who called him servant and friend. In 1538 Cromwell sent him with Hans Holbein to obtain portraits of possible consorts for the King; later in the same year, while Edward Carne was sent to negotiate marriages between Henry VIII and the Duchess of Milan and between Princess Mary and the Infante of Portugal, Hoby delivered a letter to Charles V explaining the King’s plans for the marriages and for the peace of Europe. In 1540 he attended the reception of Anne of Cleves at Blackheath. His Protestantism, which had earlier commended him to the King, placed him at risk in 1543, when he was committed to the Fleet for having maintained a clerk ‘who was known to be a man of evil opinions touching the sacrament of the altar’. The affair blew over, and in the following year he fought in the French campaign and was knighted at the fall of Boulogne. In 1545 he served in the Earl of Hertford’s invasion of Scotland as the earl’s master of the ordnance. To his already burgeoning duties abroad, at court and in the field he also added a post in the household set up for Queen Catherine Parr in 1543, where he was responsible for her ‘foreign receipts’, and in 1543 and 1544 she gave him New Year’s gifts of black satin. Henry VIII remembered Hoby in his will with a bequest of 200 marks.6

Hoby’s varied services did not go otherwise unrewarded. In 1540 both he and Lord Lisle had been after the former Dominican priory near Ludgate but neither secured it. Hoby did obtain a house at Blackfriars, probably the one in Carter Lane acquired in June 1541 along with a number of others including the ‘Herber’ in Dowgate near the church of St. Mary Bothaw and the ‘Cheker’ in Bread Street. He also secured much ex-monastic property, including Evesham abbey, Worcestershire, in 1541 and Torksey priory, Lincolnshire, in 1544.7

Hoby may have sat in one or more of the later Henrician Parliaments, for which the lists of Members are incomplete, and he is known to have done so in the first Edwardian one from 1547. He was not one of the Members originally elected to it, but when John Cock II was chosen for both Calne and Cardiff and opted for the Wiltshire borough Hoby replaced him at Cardiff, his name being accordingly entered on the list of Members as revised for the fourth session. His return there is to be ascribed to his service under Catherine Parr, whose brother-in-law, (Sir) William Herbert I, was clerk chancellor of the lordship of Cardiff: Cock, whom Hoby replaced, was the Queen’s attorney. Hoby could also have counted on the support of the Protector Somerset, with whom a few months later Van der Delft reported that he was much in favour, especially because of their agreement in religion. As it turned out, Hoby was to be largely an absentee Member: his embassy to the Emperor from May 1548 to August 1550, broken only by a brief return to England in October 1549, meant that he missed the whole of the second and third sessions, and a mission in February 1552 to repay a loan in the Netherlands interrupted his attendance at the fourth and final one. He was back in time for the end of the Parliament, for on 13 Apr. the Privy Council, meeting at the ‘Parliament House’, instructed him and the lieutenant of the Tower to examine the Countess of Sussex on articles delivered to them by Armagil Waad. It was during his embassy to the Emperor that he wrote to the Protector recommending the spoliation of the Church to finance an Army.8

Early in Edward VI’s reign Hoby had been wholeheartedly for Somerset, but in the crisis of 1549 he threw in his lot with John Dudley, Earl of Warwick. He had arrived in England from the imperial court in the first week of October 1549 before the trouble began; according to Edward VI’s ‘Chronicle’ he came home to see his family, but Van der Delft believed that he was offended by the Protector’s bestowal of certain offices, formerly held by (Sir) Anthony Denny and now coveted by Hoby himself, upon one of his henchmen. Hoby was employed as intermediary between the Council in London and Somerset at Windsor, a task he is judged to have performed ‘with superb skill’: convinced that the Protector must surrender, Hoby both sapped his disposition to resist by pledging his own neck for his safety and cleverly turned his entourage against him. He was promptly sent back to the imperial court with Sir Thomas Cheyne to explain the change in regime and remained with the Emperor until his recall in August 1550, when he was succeeded by (Sir) Richard Morison. Charles V wrote to Edward VI of the modest and becoming manner in which he had discharged his duties.9

In the summer of 1551 Hoby was a member of the embassy sent to France, ostensibly to invest the French King with the Garter, but really to discuss matters of greater weight. Admitted to the Privy Council later in the same year, Hoby became a leading figure in the government. When the King and Council left the capital in the summer of 1552 he was left behind and required to live in the Tower of London, an experience which did nothing to improve his declining health. It was doubtless with this in mind that before the year was out he secured a grant of Bisham abbey, which he made his home. In April 1553 he and the bishop of Norwich went as ambassadors to the court of Charles V, where they remained until the end of Edward VI’s reign. The imminence of this mission may explain why, so far as the evidence goes, Hoby was not returned to the Parliament of March 1553, and his absence from the country during the following months saved him from direct involvement in the device to alter the succession, although as one of the ambassadors to the Emperor it was his duty to announce the accession of Queen Jane.10

Hoby was recalled to England by Mary in August 1553; in December he was forgiven his debts to Edward VI on account of his services and also received a general pardon. Although he openly supported the Queen’s marriage to Philip of Spain he was suspected by Renard who described him as one of the craftiest heretics in England. Finding himself in an uncongenial atmosphere and deteriorating health he obtained leave in 1554 to go abroad to take the waters at Liège and Aix-la-Chapelle. Renard was convinced that he was going to plot with the Duke of Savoy and claimed that he had sympathised with Wyatt’s rebellion: although the illness appears to have been genuine, Hoby did visit leading Protestant exiles and spent the summer of 1555 with (Sir) John Cheke at Padua, but he also waited on the Emperor and on King Philip, from whom he brought a message for the Queen when he returned early in 1556.11

Hoby made his will on 1 May 1558, asking ‘to be buried after a decent sort’ wherever he died. He left most of his lands, including those at Bisham and his house at Blackfriars, to his half-brother Thomas. He remembered the poor at Bisham and Evesham and made bequests to Sir Richard Blount, Sir William Cecil, Sir John Mason and Sir Henry Paget: Blount, Cecil and the testator’s half-brother were named executors. Among the witnesses were John Lovelace and William Sheldon. Hoby died on 9 May leaving as his heir a sister Mary, to whom a third of the estates descended. The will was proved on 2 July 1558. Although he had died in London, Hoby was buried at Bisham where his sister-in-law erected a monument to his and Sir Thomas’s memory. A drawing of Hoby by Holbein survives.12