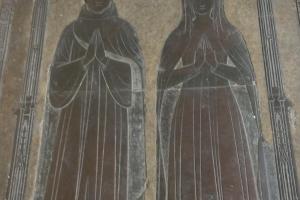 Although overshadowed by their younger brother, Henry, whose skills as a jurist, ecclesiastical administrator and royal diplomat enabled him to rise from relatively humble origins to become archbishop of Canterbury, the two London grocers, William and Robert Chichele, enjoyed considerable influence on their own account. Their father, Thomas, was a man of some consequence at Higham Ferrers, where he lived from 1363 onwards, if not before. The burgesses of the town (which was the centre of a duchy of Lancaster lordship) twice elected him mayor, and in 1386 he was made a subsidy collector for the county. Later sources describe Thomas as a draper, but there is no direct contemporary evidence of any interest in trade. It seems likely, however, that his wife was closely related to John Pynchoun (d.1392), an alderman of London who is variously designated draper or jeweller, and his brother Walter, an influential member of the Drapers’ Company. This connexion may well explain why Thomas Chichele’s two elder sons chose to enter the world of commerce, and perhaps did much to ensure their early success in the City.7

The first known reference to William Chichele is dated 1373, when he had already become a full member of the Grocers’ Company. He continued to play an active part in its affairs for the next 45 years, although his name does not occur outside the company records until July 1384. He was then one of the 23 representatives from Cheap Ward to attend a meeting of the common council, which he again did on the occasion of the next mayoral election.8 Shortly before beginning his first term as warden of the Grocers’ Company in May 1385, he was found to owe £24 to the Genoese merchant, Daniel de la Mare, but despite the general lack of evidence about his business transactions, there is nothing to suggest that his finances were ever other than sound. From time to time he himself appeared as a creditor. In April 1391, for example, he petitioned the mayor of the Staple of Westminster for help in recovering a debt of £40 which William Maindyn of Berkshire had promised to pay two years before. Like most grocers, he dealt in apothecary’s goods, and in 1398 we find him supplying medicines for the household of Henry of Bolingbroke. As committed Lancastrians, all three of the Chichele brothers welcomed Henry’s accession to the throne in 1399, and in varying degrees each benefited from it. William Chichele continued to provide the keeper of the Great Wardrobe of the royal household with a variety of dry goods, although not on the scale of some of his fellow merchants. In July 1413 he and Thomas Burton, another London grocer, had a royal licence to export wool from England, and in the following year they were allowed to ship grain into the country from Spain and Portugal.9

In the course of his career Chichele acquired property in both London and the country. From his father he inherited a house and land in Higham Ferrers, being already the owner, with his wife, of a messuage and its extensive appurtenances in Stanwell, Middlesex. This had been settled upon the couple by the London apothecary, John Donati, in 1390, and it was here, in his country house, that Chichele drew up his will 36 years later. He and his brother, Robert, possessed a joint title to land in Walthamstow, Essex, but they may well have done so as trustees, rather than on their own account. Less doubt surrounds William’s ownership of the manor of West Ham, which he and his wife settled upon new feoffees in 1425, not long before his death. He also appears to have acquired property in the diocese of Winchester, perhaps in Southwark, since in May 1388 he obtained a licence from the bishop to make use of a private oratory while living there.10 His principal holdings in the City comprised a brewery called Le Castell on the Hoop, together with a messuage and two shops in the parish of St. Margaret, Friday Street. These were in his hands by October 1415, when he offered them as security for the payment of a debt of £130 to William Sevenoak* and two other grocers, although the undertaking proved to be no more than a formality. He owned two more tenements in the parishes of St. Nicholas Cole Abbey and St. Mary Mounthaw, which, together with a shop in Old Fish Street, had originally been settled upon him in August 1403. He also occupied a tenement in the parish of St. Mildred Poultry, although it is not known if the assessors of the lay subsidy of 1412 took this into account when compiling their return. Chichele’s estimated annual income from premises in the City alone then stood at almost £11, a sum which places him among the wealthier citizens of London.11

Chichele often acted as a feoffee-to-uses, most notably for William Baret*, John Hadley* (who also chose him to help execute his will) and Thomas, Lord Morley, marshal of Ireland. He was also involved in the affairs of John Wakering, who became bishop of Norwich in 1415, some 20 years after their connexion first began.12 When his business partner, Thomas Burton, died intestate, in or before the autumn of 1418, Chichele undertook to administer his estate and was sued by one of the deceased’s creditors. On the whole, however, he managed to avoid responsibilities of this kind. Only twice, in December 1397 and July 1402 did he offer sureties in Chancery: on the second occasion for his younger brother, who, as newly-appointed dean of Salisbury, had been accused by the Crown of contempt.13

Chichele’s rise to a position of importance in the City owed little, if anything, to his brother’s success in the Church, although at a later date he and his two sons enjoyed the fruits of nepotism. It is a mark of Chichele’s personal standing that as early as June and July 1398 he and his wife obtained papal indults for the plenary remission of sins at the hour of death, and that in the following September these indults were superseded by another granting them such remission as often as they pleased. Two years later Chichele was one of the leading citizens of London to petition Parliament for an inquiry into certain ‘malpractices and extortions’ committed by the sheriffs. His presence is recorded at two parliamentary elections held subsequently in the City (those of 1407 and 1419), but he may well have attended others.14 Chichele’s elder son, William (d.1424), was in fact the first to profit directly from Henry Chichele’s spectacular rise. Although still a minor, he was made chancellor of Salisbury cathedral soon after his uncle surrendered the post in 1409. His collection of prebends, offices and livings, all in the archbishop’s gift, grew impressively; and his last days were spent in Italy as a papal notary and as rector of the Ultramontane University in Bologna, where he obtained a doctorate in canon law.15 Chichele himself was meanwhile provided for in 1416 with the stewardship of the archbishop’s liberty, an office which, on his death, passed to his second son, John, with an annuity for life of 40 marks.

Not much is known about Chichele’s later years, largely because he seems to have retired gradually from civic life. He was one of the keepers of the fabric of St. Dunstan’s in the East until at least 1417, and he served as an alderman for another three years or so, but the only mention of him in the City records after this date is to his appointment in May 1421 as an arbitrator in a commercial dispute involving the grocer William Burton I*.16

Chichele died between 9 May 1426 and 20 July 1427, and was buried at Higham Ferrers next to his parents. To the college of priests which his brother had recently founded there he left a substantial part of his London property in reversion. His other bequests included a gift of £10 for the purchase of ‘bokes notable’ to stock the Guildhall library, another for work on the foundations of London Bridge, and a third to go towards the cost of building a new Grocers’ hall. He was less generous to the parishioners of Stanwell, who had to forgo their right of way through his property before being excused the £7 which they owed him for providing them with a new church bell. Chichele left two daughters and a son, whose spendthrift ways caused many problems for the family, and must have blighted his father’s last years, not least because of his heavy borrowing from William Oliver*. John Chichele, whose marriage to Margery, a daughter of the wealthy and influential grocer, Thomas Knolles*, was extraordinarily prolific even by 15th-century standards, eventually managed to regain a degree of financial equilibrium, and even had a hand, as city chamberlain, in managing the reserves of money held in the common chest.17