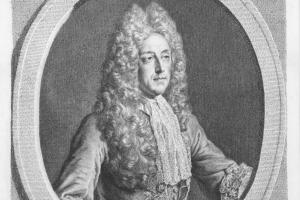 Prior rose from humble beginnings to become a protégé of the 6th Earl of Dorset (Charles Sackville†), an intimate friend of the brothers Charles* and James Montagu I*, and a distinguished poet and diplomat. His origins are obscure, although it is known the family was from Dorset. Prior himself is usually said to have been born in Dorset and to have spent the first few years of his life there, but parish registers suggest that he may in fact have been born in London and that his father (and two of his uncles) had moved there by the early 1660s. In London, Prior’s intelligence and literary talent at a young age attracted the attention of Lord Dorset. He was educated at Dorset’s expense and that of Prior’s uncle, and at the same time became friendly with the Montagu brothers who lived nearby. His patrons’ support of the Revolution ensured that his own career began well, Charles Montagu successfully recommending him for an appointment as secretary to the ambassador at The Hague in 1690. He remained at The Hague, with only brief visits to England, for seven years, during which time he wrote poetic tributes to both King William and Queen Mary. After the peace of Ryswick, he transferred to France in 1698 as secretary to the Earl of Portland’s embassy. Away from England, Prior’s politics seem to have developed rather differently from that of his Whig friends. Letters which Prior wrote to Lord Portland from Paris in March 1699 demonstrate that he was a courtier rather than a true Whig, and was already turning towards the rising Tory faction at court. He advocated that William ‘be his own minister’ as some in the government were ‘too deep in their parties’ interest’ to serve the King honestly, and considered that the current bill to prevent customs officials from sitting in the Commons was an unacceptable limitation on the King’s power. He also suggested that the clergy should be approached to oppose the bill, preferably the Tory clergy whose sincerity he found more convincing than that of the Whigs, and was critical of Bishop Burnet in particular. He ended by requesting Portland not to show his advice to anybody, especially not to Secretary Vernon (James I*) or to ‘my friend’ Montagu, and declared that he gave his opinion, not ‘out of a saucy desire to show myself a politician’ but out of duty and zeal for the King.2

Prior’s views may have owed something to his friendship with Lord Jersey, who had been one of the plenipotentiaries at Ryswick and replaced Portland in France in 1698. After Jersey’s departure in April 1699, Prior also desired to leave France and was permitted to return to England in October that year. He indeed owed his next appointments, as secretary to the lords justices of Ireland and then under-secretary of state, to Jersey, who was one of the lords justices and then secretary of state. When Jersey left the latter post to become lord chamberlain in 1700, Prior transferred to the Board of Trade.

In April 1700, Prior wrote to Lord Manchester expressing relief at the close of the session, which had ended the Commons’ attack on the King’s grants to favourites and Whig ministers:

they threw fire at everybody, and had a great mind to fling at our friend Charles [Montagu]. You see what they would have done to my lord chancellor [Sir John Somers*] and how the Duke of Schomberg and Lord Portland suffer in their address that strangers should not be Privy Councillors.

That summer Prior was in Paris, but he had returned by 10 Dec. when he wrote again to Manchester predicting a new Parliament. He commented with apparent distaste that

Whig and Tory are railing, on both sides, so violent, that the government may easily be overturned by the madness of either faction. We take it to be our play to do nothing against common sense of common law, and to be for those who will support the crown, rather than oblige either party; and in order to this, men are preferred who are looked upon to be honest and moderate.

He also remarked that Montagu’s expected removal to the Lords would contribute to unity in the Commons. Prior himself had hoped to stand for Cambridge and had made known his intentions as early as December 1699, but support for his candidacy having evaporated by November, he had given up by December and was instead brought in for East Grinstead in Feb. 1701 by his long-time patron Dorset. His parliamentary career was extremely short and chiefly of note for his open association with the Tories during the latter part of the session and consequent loss of favour with the Whigs. He reportedly voted for the impeachment of the Whig lords who had drawn up the first Partition Treaty (including his friend Montagu, now Lord Halifax), and was blacklisted as one of those opposed to war with France in 1701. In December Jean de Robethon reported that, ‘Prior est exclu pour jamais, ayant perdu la faveur de milord Dorset’, and indeed Prior did not stand for Parliament again.3

Prior retained his office until 1707, but in February that year rumours reached him that he was to be turned out. He wrote to Lord Halifax (Charles Montagu) assuring him of his loyalty and desiring Halifax to recommend him to the secretary of state, the Earl of Sunderland (Charles Spencer*), but not surprisingly he was removed. The Tories’ return to power in 1710 revived Prior’s career: he was on good terms with leading government Tories Robert Harley* (soon to become Lord Oxford) and Henry St John II*; he was a member of St. John’s Tory club, the Society of Brothers; and in July 1711 St. John appointed him to make a secret journey to France and initiate preliminary peace negotiations. The French secretary of state, Torcy, was delighted, describing Prior as ‘homme d’esprit, bien intentionné et persécuté par les Whigs’. Further negotiations were held at Prior’s house in Westminster, and the following year, when negotiations at Utrecht were well under way, Prior accompanied St. John (now Lord Bolingbroke) to France, remaining there throughout 1712 and 1713 as the Queen’s plenipotentiary. A rumour circulated in March 1713 that new peerages were to be announced and ‘the Tories speak of Mr Prior for one, as if it were a thing not to be wondered at’, but no such reward was forthcoming. After the signing of the peace treaty in March 1713, Prior was required to remain in France. To his distress, he was not given a formal position, but neither was he allowed to return to England. In fact, he was not finally recalled until May 1715, whereupon he was interrogated by the committee investigating the Utrecht treaty and spent a year under house arrest. He lived out his last years on the proceeds of an edition of his poetry and with the generous patronage of Oxford’s son Lord Harley (Edward*). In 1720 he expressed interest in standing in a forthcoming by-election at Cambridge, but a hostile reaction discouraged him. He died on 18 Sept. 1721 and was buried in Westminster Abbey, leaving as his main beneficiaries his secretary Adrian Drift and his mistress Elizabeth Cox.4

Unless otherwise indicated this biography is based on F. Bickley, Life of Matthew Prior