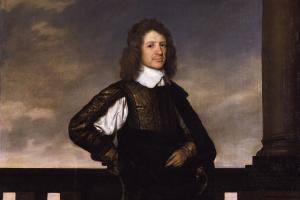 ‘A menial servant’ of Charles I, Strickland served under his father in the royalist army in the first Civil War, and took part in the northern conspiracy in 1655. But at the rendezvous on Marston Moor his nerve broke, and he set the example of flight. He was sentenced to transportation, but this was never carried into effect.4

At the general election of 1661 Strickland was returned for Thirsk, probably on the Belasyse interest. A moderately active Member of the Cavalier Parliament, he was named to 43 committees, including the committee of elections and privileges in six sessions, and acted as teller in five divisions. In the first session he was among those appointed to report on the shortfall in the revenue, to consider the corporations and uniformity bills, and to inquire whether James Philipps* had joined in sentencing the royalist conspirator John Gerard under the Protectorate. After the Christmas recess he acted as teller for hearing the report of Francis Goodricke* on the alnage, and with his brother against the continued detention of a Buckinghamshire baronet for infringing the privilege of Edward Grey*. He was awarded a pension of £200, backdated to the Restoration, though he was unable to secure payment; but a vacancy occurred in the royal stables in 1663, to which he was appointed. In this session he was named to the committees for the additional corporations bill, the staple bill, and reforming the collection of hearth-tax. With the Lancastrian Edward Rigby* he acted as teller against the bill to establish turnpikes on the Great North Road, and with the Anglican stalwart Giles Strangways* against a proviso on behalf of occasional conformists to the conventicles bill. He was listed as a court dependent in 1664, and became a receiver of taxes; but he was teller for curtailing the Christmas adjournment in 1666, apparently in order to expedite proceedings against another former royalist conspirator, Lord Mordaunt, and he was made a deputy lieutenant by Buckingham. Listed as a friend of Ormonde in 1668, he was twice among those ordered to inquire into seditious conventicles, and in 1669 Sir Thomas Osborne* included him among the court dependants in the House. His appointment as receiver of hearth-tax when direct collection was resumed in 1670 at last enabled him to make good his claim on the Treasury for his position. When Sir George Downing* named him among the Members in default in December, he ‘confessed he owed the King £2,000, but said the King owed him as much upon a former grant, which he hoped would balance it’. He was probably seriously ill, since his death had been reported in the previous August, and a new writ was ordered on 23 Jan. 1671. His widow and sureties cleared his account at the Treasury with a modest payment of £500, though it was subsequently discovered that he had left over £700 in taxes uncollected.5

This biography is based on H. Hornyold, Strickland of Sizergh, 118-20.