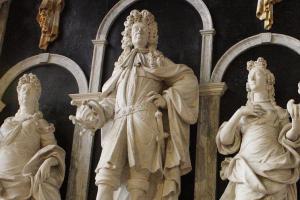 Digby’s grandfather, the 1st Earl of Bristol, came from a cadet branch of the Midland family. He was granted the Sherborne Castle estate as a reward for diplomatic services in 1616. His father sat for the county in both Parliaments of 1640 before being called up to the Lords, having made the Lower House too hot to hold him by his unexpected and well-publicized opposition to Strafford’s attainder. During the Interregnum, when his father in exile became a convert to Rome, Digby seems to have lived with his Puritan mother, whose ‘zeal cannot suffer a Catholic under her roof’. She bought back the estates from the Treason Trustees by selling her own jointure, and settled it on Digby on his marriage. Digby showed little desire to emulate his ancestors in high politics, and he certainly took no part in his father’s increasingly futile opposition to the Clarendon administration. He was himself ‘naturally inclined to avoid the hurry of public life’, or, less politely ‘every way a weak man’. His abuse of Shaftesbury when he learnt that his candidature for the county in 1675 was to be opposed must be ascribed to a conviction that the seat appertained to his estate, rather than to political animosity. Digby won the election handsomely, but lost the action for scandalum magnatum; the damages and costs, however, were more than covered by a subscription from the gentlemen of the county.3

Digby took part in only two sessions of the Cavalier Parliament, during which he was an active Member, being named to 20 committees. In considering the bill to restrict the growth of Popery on 15 Nov. 1675, he might, as the son of a notorious convert, be expected to contribute special knowledge; his own religion, as his episcopal obituarist expresses it, ‘was that which by law is established’. He was also on the committee for the bill to recall English subjects from French service on 10 Nov. 1675, and took part in the conference on a joint address to urge the formation of an alliance to defend the Netherlands on 13 Mar. 1677. Sir Richard Wiseman listed him among the government supporters, and he wrote to (Sir) Joseph Williamson between sessions, offering his services.4

After his succession to the peerage as Earl of Bristol, Digby can be reckoned a follower of Danby, to whom he sold his father’s house at Wimbledon; but after some hesitation he voted for his attainder on 14 Apr. 1679. He abstained from the division on the exclusion bill, but voted for the condemnation of Lord Stafford. In June 1681 Bristol had the satisfaction of presenting, and Charles of receiving, a loyal petition from Shaftesbury’s own county. By 1687, however, he appears as an opponent of the Court on Danby’s list. His canvass of the deputy lieutenants and justices of the peace was singularly unsuccessful; favourable replies were received only from the four Roman Catholics on the commission and two others of little weight in the county. When he was ordered to dismiss the remainder, he replied desiring Sunderland (who was his brother-in-law) ‘to beg the King to excuse me from acting as his lieutenant’. But on 28 Sept. 1688 he received the writ for the sheriff to hold the elections for James’s abortive second Parliament, and on inquiry he found that he had been restored on his own conditions. Nevertheless, he led the gentlemen of the county over to William in November, a service rewarded with a pension of £5,500. Even before the Convention met he was in favour of the transfer of the crown, and appears to have been active (doubtless through Thomas Erle) in securing the return of like-minded candidates. In the Convention he signed the protest of the minority in the Upper House against the narrow defeat of a resolution affirming that the throne was vacant (4 Feb. 1689). Bristol died on 18 Sept. 1698, and was buried at Sherborne Abbey. His estate passed to his cousin William Digby, whose descendants continued to represent the county in the 20th century.5