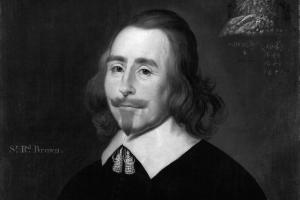 Nothing is known of Browne’s early life or family apart from the pedigree which he entered at the heralds’ visitation of London in 1634. A coal merchant by trade, he distinguished himself in command of the London train-bands during the Civil War, and entered Parliament as recruiter for Wycombe. A Presbyterian, he was secluded at Pride’s Purge and imprisoned for five years. After his release he was elected to the second and third Protectorate Parliaments for the City, though he had already been drawn by Silius Titus into royalist conspiracy, and he had to go underground after the failure of Booth’s rising.7

Browne was re-elected for London in 1660 without opposition, and his interest at Wycombe secured his son’s election there. A moderately active Member of the Convention, he was appointed to 16 committees and made four recorded speeches. Lord Wharton marked him as a friend, to be managed by his brother, Sir Thomas Wharton. Browne could not be spared from London, where his prestige among the apprentices was still very high, to join the deputation to the King at The Hague, but he was one of the four Members who conducted the ballot for this purpose. In the financial sense, however, his credit was less good, and he does not seem to have played much part in raising loans in the City for the interim Government. He was appointed to the committee for the land purchases bill. After heading the King’s triumphal procession through the City, he was rewarded with a knighthood and a baronetcy, and he was one of the Members nominated by the lord steward to administer the oaths of allegiance and supremacy to the Commons. Although no longer a member of the Woodmongers, he was doubtless responsible for the decision of the common council which gave them control over their rivals, the carmen. In the debates on the indemnity bill he defended Bulstrode Whitelocke†, who had saved him from capture, but prompted by Titus he gave a damning account of a private conversation with Col. Adrian Scrope, and thereby sealed his fate as a regicide. When the City petitioned against a naturalization bill, Browne was added to the committee to consider it. His claim for over £2,000 arrears of pay was accepted by the House and charged on the excise. He was among the Members sent to the lord mayor on 13 Aug. to ask him to summon the common council for raising a loan of £100,000. He was named to the committee for the disbandment bill, under which he was appointed a commissioner, and helped to manage a conference. During the recess he was given a sinecure post on the board of appeals in excise, and succeeded as lord mayor. In the second session he was less active in committee, but he seconded Titus’s motion for empowering the City to recover their expenditure on the reception of the King. ‘It would rejoice the fanatic party highly to have this bill thrown out’, he told the House.8

‘Equally feared and hated by the seditious party’, Browne ‘carried himself very honourably’ during the Fifth Monarchist revolt in January 1661, ‘and caused one of their meeting houses to be pulled down’. The common council voted him a pension of £500 p.a. for this and other services as major-general of militia. As lord mayor he did not stand at the general election, but was returned for Ludgershall at a by-election at the end of the year. Like Titus in the previous Parliament, he probably owed his seat to the Roman Catholic Brownes of Shefford, although they were not related. He was again moderately active in the Cavalier Parliament, being named to 63 committees, most of which were connected with trade, and in particular with London. During the remainder of the first session, he helped to consider the bills for the better employment of the poor in London and Westminster, and for regulating the excise. He was able to buy a small property in Essex in 1662. Although he had become ‘a very dutiful son of the Church of England’, opposing the pretensions of the Presbyterians at the Hampton Court Conference, he urged toleration for their ministers when the Act of Uniformity came into force; but in 1663 he was added to the committee to prevent the meetings of sectaries. He was also among those appointed to consider the bill concerning the grant of offices in London, and in the following year he was added to the committee for restoring the clerk of the chamber. He was listed as a court dependant in 1664. During the second Dutch war he boasted that if there were any bad news from sea, he ‘clapped up several persons that he was afraid of’ to prevent disturbances; but to his dismay he heard from Samuel Pepys that he had no defence to an action of false imprisonment. In 1665, after Lord Mayor Lawrence had renewed the attack on the Woodmongers, Brown was among those appointed to consider a bill to regulate the measurement of coal and wood. During the Great Fire he showed himself ‘but a weak man’, rewarding with £4 the rescue of a chest of his said to contain £10,000. He was named to the committees for the relief and reconstruction of London, the indemnification of the sheriffs, and the suspension of building work along the river bank, in which he was interested as tenant of Whitefriars Wharf. He examined the owner of a house in the ruins of which ‘two desperate kinds of knives or daggers’ had been found. In the same session he was added to the committees for the suppression of Popery and to consider a petition against Lord Mordaunt. In his only recorded speech in this Parliament he opposed a petition against the London water-bailiffs. In 1668 he was listed among Ormonde’s supporters, and appointed to the committees to consider proposals to bring down the price of timber required for the rebuilding of London and to receive information about the insolencies of nonconformists. In January of the following year Lawrence, who was as much a friend to the conventiclers as an enemy to the Woodmongers, prevailed with the common council to withdraw Browne’s salary. He died intestate on 24 Sept. 1669, and was buried at Debden.9