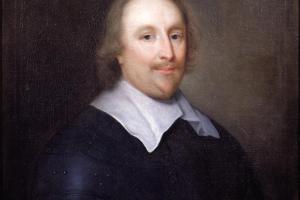 Lenthall’s ancestors migrated from Herefordshire to Oxfordshire in the fifteenth century. The family was recusant under Elizabeth, but this branch became Protestant after the early death of Lenthall’s father in 1596. Lenthall’s mother, the sister of the Jesuit poet Robert Southwell, conformed to the established Church, and his elder brother’s guardian was a client of the Cecils.26 Lenthall himself became a lawyer, and was called to the bar in 1616. His marriage made him a kinsman of (Sir) Lawrence Tanfield*, who presumably persuaded the corporation of New Woodstock to choose him as recorder in succession to (Sir) James Whitelocke*. At the general election of 1624 he was returned for the borough, which usually elected its recorder. He was named to seven committees, whose subjects included the holding of secret inquisitions (8 Mar. 1624), the removal of suits from inferior courts (15 Mar.) and the reversal of outlawries (12 April).27 In his maiden speech on 22 May he argued that Dr. Lambe, chancellor of the diocese of Peterborough, ought not to be excluded from the general pardon without hearing him defend himself against charges of extortion. Later the same day he reported from a sub-committee that Dr. Cradock, chancellor of Durham, had offended more heinously than Lambe.28 He was named to the conference on the repeal of the Wine Act (22 May), and appointed to assist Sir Edward Coke with the amendments to the concealed lands bill (22 May).29

Despite Tanfield’s death in the following year, Lenthall hoped to be re-elected to Parliament in 1625, but he lost out to the ranger of Woodstock Park, Sir Gerard Fleetwood. This represented a break with New Woodstock’s electoral tradition, and Lenthall evidently sought a seat in at least one subsequent Parliament, for he later complained to the town ‘you know what a disgrace it was to me the last time, the not choosing me amongst you’.30 Nevertheless he remained on good terms with the borough, to which he had remitted the greater part of his annual fee in 1622 ‘towards the repairing [sic] of poor children’, and he was finally re-elected in 1640.31 His career flourished at the bar, accumulating funds sufficient for the purchase of Bessels Leigh in 1634 and Burford Priory in 1637.32 By his own account, he was earning £2,500 per annum before he became Speaker of the Long Parliament.33 He complied with most of the changes of the next 20 years, but was declared incapable of public office at the Restoration. Having added a last codicil to his will on 13 Aug. 1662, he died three weeks later and was buried in Burford church.34 Portraits of Lenthall as Speaker by Henry Paert and Van Weesop are to be found in the Palace of Westminster. The National Portrait Gallery also holds an anonymous portrait (reproduced in the Oxford DNB) and a miniature likeness by Samuel Cooper. Lenthall’s eldest son John, a recruiter for Gloucester in the Long Parliament, represented Abingdon in the Convention until he was unseated on a double return.