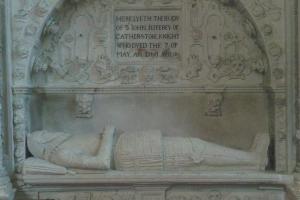 This Member may have been related to William Jefferies, a Southampton notary of Somerset origin who died during his mayoralty in 1572.14 Nothing is known of Jeffery before he first appears in Southampton’s assembly books as a tax-paying resident in 1586.15 Although described by his kinsman Sir William Waad* as ‘a very honest merchant’, he engaged in privateering ventures during the war with Spain, and was accused by one Southampton trader, John Mercer, of ‘hard and unconscionable dealing’ in recovering debts.16 The ‘ancient amity’ and ‘neighbourly kindness’ which he claimed to feel for Richard James* did not survive an unfortunate transaction in wheat in the summer of 1593.17 After serving as mayor, Jeffery protested that he was ‘much out of purse’ in obtaining intelligence and setting forth a ship of 200 tons with a crew of 120 for the queen’s service; nevertheless in the same year, 1599, he bought a large estate in Dorset.18

Jeffery was knighted, as ‘one of the most successful Southampton men of his generation’, during King James’s visit to the town in 1603.19 Elected to the first Jacobean Parliament, in the 1604 session he was among those ordered to hear the king explain his intentions over the Union with Scotland on 20 Apr., and to consider four bills, including one ‘for all merchants to have free liberty of trade into all countries, as is used in all other nations’ (24 April).20 In the second session his first appointment was to the committee of inquiry proposed by Sir George Somers* into the Spanish Company (10 Feb. 1606),21 and his bill committees were for the explanatory measure on corporation ordinances (28 Feb.), the import and price regulation of wine (7 Mar. and 8 Apr.), and the false making of black soap (5 April).22

In the third session of the Parliament Jeffery was entrusted with a bill to confirm Southampton’s medieval charter, with the intention of excluding Londoners with ‘mighty purses’ from trading in the town.23 On 4 Mar. 1607 the charters were sent up to him, and nine days later he was thanked for ‘soliciting the suit’ with Sir Thomas Fleming I*.24 At the bill’s second reading on 1 May Jeffery was appointed to the committee.25 The bill was reported by Southampton’s recorder, William Brocke*, Member for St. Ives, and ordered to be engrossed; however, it was further disputed by counsel for the city of London, and finally passed after a division on 8 June.26 Southampton’s corporation estimated that the passage of the Act had cost them £100, including £13 12s.6d. sent to Jeffery for his expenses, of which he returned 19s. to the mayor.27 Jeffery’s other committees in the third session were for the bills ‘to reform the negligent, unfaithful, and treacherous dealing of mariners and sailors’ (1 May), to permit the assignation of debts between sailors (5 June), and to enable a Berkshire squire to sell part of his estate (13 June).28 When Parliament reassembled in the spring of 1610 Jeffery introduced a petition on 9 Feb. from Lyme Regis asking for new writs since one of their Members was unable to travel to Westminster, and the other, Somers, was absent in the New World.29 The petition was granted, and Jeffery’s son George was elected to fill one of the vacancies.30 Jeffery was chosen to attend the supply conference of 15 Feb. 1610, at which the Great Contract was proposed, and was named to three legislative committees, to divert the revenues of Frome Whitfield rectory to charitable purposes in Dorchester (17 Feb.); to avoid double payment of debts (20 Feb.); and to provide for the repair of Minehead harbour (23 February).31 He left no trace on the records of the brief fifth session.

Jeffery joined the newly incorporated French Company, but died soon afterwards on 7 May 1611.32 In his will, dated 23 Jan. preceding, he appointed his eldest son, George, sole executor, with his brother-in-law Thomas Cheke I*, and John Drake*, as overseers. Bequests were made to the church and poor of his local parish Whitchurch Canonicorum, and also to Newport in the Isle of Wight and to Holy Rood, Southampton. Besides his dwelling-house in the High Street (which had previously been known as the Angel but which he had renamed the James), he owned the Dolphin, then and since the principal inn of the town, nine messuages, a brewhouse, and considerable farmland in the neighbourhood. His widow received a life interest in all of this property, together with £500 in cash, an annuity of £50, half his plate and household stuff, and ‘the use of my new tapestry hangings’ during her widowhood. His aged mother was to be ‘carefully used and provided for’. To his younger children he left portions totalling £4,700. He exhorted his wife to ‘have a friendly care of the education of my young children [and] of the well placing them to learning or to some science whereby they may know how to get their livings in time to come’.33 His four daughters all made good matches, and his third son Francis, who was already serving an apprenticeship, married the sister of Lord Cavan (Charles Lambart*) in 1624.34