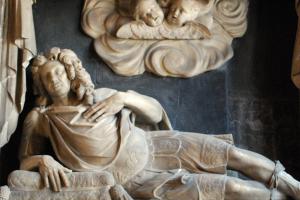 Holles was one of Prince Charles’s closest boyhood companions. Despite his ‘low voice’, he was accorded a part in the Clare Hall production of Ignoramus, a play satirizing the legal profession, in March 1615. The king was so delighted that he ordered a second performance in May, much to the fury of Sir Edward Coke*, who ‘galled and glanced at scholars with much bitterness’. His intention of joining the prince in Madrid in 1623 was not carried through. Instead he went to Dorset to visit Sir Francis Ashley, presumably in an attempt to persuade him to consent to his courtship of Ashley’s daughter Dorothy, which was initially opposed by both families.25

Although the principal estates of Holles’ father lay in Nottinghamshire, the family also owned property in Cornwall, including the manor of Denzell, from which Holles derived his first name. The manor was eight miles from Mitchell, for which borough Holles was returned in 1624 after his elder brother John chose to sit for the Nottinghamshire borough of East Retford. Holles left no trace on the records of the last Jacobean Parliament, unless it was he rather than his brother who was named to attend the conference with the Lords of 22 May 1624 on the effect of the monopolies bill on the wine licences.26

On the accession of Charles I Holles reputedly refused to be made a knight of the Bath or to participate in the coronation masque.27 There is no evidence that he sought election to the first two Caroline Parliaments. In June 1626 he finally married Dorothy Ashley, and the couple took up residence in Dorchester, where his father-in-law was the recorder and where Holles, like Ashley, became a friend of the renowned puritan minister John White, the so-called ‘Patriarch of Dorchester’. Sir Francis Ashley settled lands worth £600 a year on the couple, while Holles’ father made over his Cornish property to them. Although then worth only £40 a year, it was thought these lands were capable of being improved to yield £250. In addition Holles received a legacy of £600 from his maternal grandmother.28

On 9 Aug. 1627 Holles wrote to his sister’s husband, Sir Thomas Wentworth*, reporting on the impact of the war on the economy of the West Country: ‘all trading is dead, our wools lie upon our hands, our men are not set on work, our ships lie in our ports unoccupied to be sold as cheap as firewood; land, sheep, cattle - nothing will yield money’. He complained of the disorders of the soldiers, and that at sea few prizes had been taken. Those that had been captured were not worth much, for ‘by that time my lord admiral and his vice-admirals be satisfied, and all other rights and wrongs be discharged, a slender gleaning is left to the taker’. He joked that ‘the most prizes most common nowadays are ... rebellious gentlemen’, like Wentworth, ‘who will not open their purse-strings and supply His Majesty’s wants for the maintenance of the wars, and my lord duke’s expenses ..., in war and peace’. Writing again after the disaster at Ré he opined: ‘this only every man knows, that since England was England it received not so dishonourable a blow’.29

Holles presumably owed his return for Dorchester in 1628 to his father-in-law, who had previously sat for the borough. He was made free of the corporation on the same day as the election. In the 1628 session he received three committee appointments and made as many recorded speeches. He was among those ordered on 24 Apr. to report on the lists of recusants brought in by the knights of the shire. In his first recorded speech on 30 May he argued that the House should resolve by a single question whether a patent concerning the drawing up legal documents was a grievance rather than vote on the various points at issue individually. On 10 June he spoke against the estate bill promoted by the 2nd earl of Devonshire (Sir William Cavendish I*), a major East Midlands landowner, arguing that Devonshire’s cousin, the 1st Viscount Newark (Robert Pierrepont†) had an interest in the estate but had not consented to the bill. Together with Wentworth he was appointed a teller against the bill, but as the noes agreed to yield there was no division. On the pardon proffered by the king, he declared on 13 June that ‘many good subjects should take little benefit by it as it now is’. His other committees were to examine the registration of pawnbrokers and to consider a petition against Sir Edward Mosley* (17, 18 June).30

In the 1629 session Holles was named to committees for bills to explain the Recusancy Act of 1606 (28 Jan.) and to reverse a decree in the Court of Wards (19 February). On 23 Feb. he urged the House to punish the customs farmers who had seized goods from those merchants who were refusing to pay Tunnage and Poundage.31 He came to national prominence by his share in the tumult that brought the Parliament to an end, being one of the Members, led by Sir John Eliot, who met after Parliament had been adjourned on 25 Feb. at the Three Cranes tavern to work out their tactics.32 How Holles was recruited to this group is unknown, but it may have had something to do with his connection with Cornwall, the native county of Eliot and the latter’s ally William Coryton. Another member of this group, Benjamin Valentine, had previously been a servant of Holles’ father’s patron, Robert Carr, 1st earl of Somerset.33 Fearing that a dissolution was imminent, Holles and his associates determined to put on record a formal declaration against the unparliamentary collection of Tunnage and Poundage, and to protest against the growth of anti-Calvinism in the church. However, they suspected that the Speaker, John Finch II, would attempt to adjourn the sitting again immediately. Consequently, when the Commons reassembled on 2 Mar., Holles and Valentine arrived early and sat next to the Speaker. These seats were usually occupied by the privy councillors, but Holles subsequently alleged that ‘he had at other times as well as then seated himself in that place’, and claimed precedence, presumably as an earl’s son, over the privy councillors at any time other than at a meeting of the Council. As anticipated, Finch delivered a message from the king ordering another adjournment, but as he tried to rise Holles and Valentine held him down. Resisting the attempts of the privy councillors to free the Speaker, Holles swore ‘by God’s wounds you shall sit till we please to rise’. ‘Are we a Parliament, or no Parliament?’ he demanded. ‘Are we assembled by the by the king, trusted for the good and safety of the king? The laws and liberties? Or are we not?’ In reply to Finch’s expression of anxiety about disobeying the king, Holles retorted that the Speaker was obliged to obey the Commons and ‘that will secure you’. Eliot thereupon read out the declaration, but in the ensuing uproar he panicked and burned the document. Consequently, when John Selden called for a vote, Eliot was unable to produce the paper again. Having gone thus far, Holles was understandably angry with Eliot and rebuked him, but fortunately he had his own copy available, which he proceeded to read to the House while Black Rod fumed outside the locked door. According to some versions of events the paper was then carried by acclamation, whereupon the Commons dispersed.34

Together with eight other Members of the Commons suspected of plotting the 2 Mar. disturbance, Holles was summoned before the Privy Council on 4 March. Under questioning he claimed that ‘he came into the House that morning with as great zeal to do His Majesty service as anyone whatsoever’ but ‘finding His Majesty was displeased with him, he humbly desired that he might rather be the subject of his mercy than his power’. He was imprisoned in the Tower until November, when, at the importunity of his wife and her parents, he submitted to be bound over, with his father-in-law and William Noye* as his sureties. Indicted before King’s Bench with Eliot and Valentine, they disputed the jurisdiction of that court over anything said or done in Parliament, and it was not until 12 Feb. 1630 that judgment was reached. He was fined 1,000 marks, but avoided making payment for as long as he could.35 Meanwhile the Dorchester corporation gave him a standing-cup worth 20 marks to mark their appreciation of his services in this Parliament.36

Holles’ actions on 2 Mar. 1629 established him as a national political figure. He refused to pay Ship Money in the 1630s and was re-elected for Dorchester to both the Short and Long Parliaments, in which he emerged as one of the most prominent Members of the Commons. One of the Five Members accused of treason by Charles I in January 1642, he took up arms for Parliament, but subsequently became a leading supporter of a compromise peace. He was again accused of treason by the New Model Army in 1647 and was subsequently secluded from Parliament. After living privately for most the 1650s he was raised to the peerage after the Restoration, becoming a prominent diplomat and privy councillor in the 1660s. In the following decade he was a leading critics of the policies of lord treasurer Danby (Sir Thomas Osborne†), although he opposed the exclusion of the future James II. He drafted his will on 26 July 1670, added a codicil on 9 Mar. 1679, and was buried in St. Peter’s, Dorchester on 10 Apr. 1680. His son and heir, Sir Francis, after sitting for the Cornish borough of Lostwithiel as a recruiter and for Wiltshire under the Protectorate, was returned for Dorchester at both elections of 1679.37