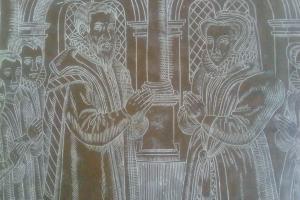 ‘Brought into Wiltshire under the patronage of Sir John Thynne', who had employed him in some unspecified business during the period of about a year when Hyde was an Exchequer clerk, Hyde became concerned with the survey of chantries under Protector Somerset, cooperating with Thynne in August 1548 in a £2,700 purchase of former church property in Wiltshire, Gloucestershire, Somerset, the West Riding of Yorkshire and London. The wording of the patent suggests that Thynne was the real beneficiary, but he may have used his influence with the Duke of Somerset to get another grant, this time in Hyde’s name alone, in the following year. For a payment of some £1,250 Hyde received lands in Bymerton, Milton and other Wiltshire parishes, together with houses in Salisbury, and small properties in Somerset, Derbyshire and Kent. Before the end of Edward VI’s reign he also bought an estate at Gussage St. Michael, Dorset. It may have been through Thynne also that he entered the service of the Seymours. How long he remained auditor to Sir Edward Seymour, Earl of Hertford, is not known: in November 1572 he wrote apologizing for not waiting on his master because he was ‘very much subject to the rheum and the stone’ and ‘utterly unable to make any long journeys’.3

For a short time he held in right of his wife the lease of Wardour castle, Wiltshire. In 1569, writing to Thynne about his tenancy there, which was soon due to expire, and about other leases in Wiltshire and Somerset, he added that he was trying to get the fee simple of lands

in these west parts ... because I would be glad to plant mine issue in this country to live with that little that I have provided quietly, and not be driven from post to pillar as I have been.

His second wife brought him ‘a fair fortune’, mainly in Wiltshire lands, left to her by her previous husband. Hyde finally established himself as a landowner in the county by buying, about 1570, the manor of West Hatch, with property in Tisbury. For the subsidy of 1576 he was assessed on £20 in lands.4

A ‘foreigner’ by birth, Hyde held no Wiltshire county office until late in life—if indeed he was ever on the commission of the peace—though in 1564 the bishop of Salisbury recommended that as a ‘furtherer of sound religion’ he should be made a justice of the peace. He presumably owed his 1559 Malmesbury seat, directly or indirectly, to the influence of Thynne. On the occasion of the contested Wiltshire county election that year Hyde—described by a witness as Thynne’s ‘auditor and servant’—‘sat with the sheriff and did write the names that gave their voices with Sir John Thynne’. He

moved the said sheriff in the open county to return Sir John Thynne and to leave out Mr. [later Sir George] Penruddock, for that he thought the laws and statutes of this realm, the case being as it was, would warrant the same.

He was fined 200 marks, with a fortnight’s imprisonment. His later seat for Heytesbury was also probably gained through the influence of the Seymour-Thynne group, while at Chippenham in 1586, whether it was he or his son Lawrence Hyde II who sat (which is uncertain) the return was probably due to Hyde’s landlord the 2nd Earl of Pembroke.5

Hyde made his will6 six years before his death, which took place 7 June 1590. The widow and sole executrix received West Hatch, Tisbury and Gussage St. Michael, and the remainder was divided among his four surviving sons except for £400 to each of his two unmarried daughters upon marrying or attaining her majority. Hyde was buried at Tisbury, where an epitaph refers to his son Henry, the father of Lord Clarendon.