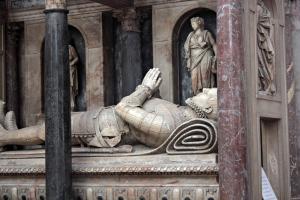 Cordell’s remarkable parliamentary career spanned four reigns, extending from his early twenties until his death nearly forty years later. During this time he missed no more than one Parliament, and was a member of eleven. Of these eleven he was a member of the Commons in five, an assistant to the Lords in nine, and in three he served in both capacities.3

Cordell’s father was a servant of Sir William Clopton of Long Melford (d.1530), in whose household Cordell himself was probably brought up, and to whose grand-daughter, an heiress to lands in Yorkshire and Lincolnshire, he made a fortunate marriage. Cordell acquired from the Crown, in January 1554, Long Melford and other land formerly of Bury St. Edmunds monastery. Combining the status of country gentleman with the career of a lawyer, he became master of the rolls, and Speaker of Mary’s last Parliament, at the commencement of which he was knighted. He was executor of the wills of both Cardinal Pole and Queen Mary and was dropped from Elizabeth’s Privy Council. This should not be counted against him, as Elizabeth was intent on keeping its number small as a matter of policy, and Cordell retained his high legal office until his death over 20 years later. Neither his mastership of the rolls nor his having been Speaker stood in the way of his being returned for two first-class constituencies in Elizabeth’s reign, as well as being named a receiver of petitions in the Lords in all the parliaments from 1558 to his death—a nice illustration of the absence of rules on the incompatibility of offices at this period in the evolution of constitutional conventions. Not surprisingly, he is recorded as serving on a number of conferences between the two Houses. He was on the succession committee (31 Oct. 1566), and was almost certainly the ‘Sir Richard Cordell’ appointed on 5 Nov. with 29 other MPs to hear the Queen’s message on the succession. He took charge of a bill concerning menservants (16 Jan. 1563), spoke on a privilege case (9 Oct. 1566), served on the subsidy committee (17 Oct.) and a legal committee (2 Dec.), and was asked to inquire into the matter of religious sanctuaries (31 Oct.). He was responsible in 1566 for the first draft of the preamble to the subsidy bill, and for persuading Robert Monson and Robert Bell to accept its wording. In 1571 he was again appointed to the subsidy committee (7 Apr.) and to a conference on religion (10 Apr.). Though not in the Commons in 572 he was appointed to a conference on Tonbridge School on 5 June that year.4

As master of the rolls Cordell and the lord keeper, Sir Nicholas Bacon†, carried out reforms in the Chancery, consolidated in ordinances drawn up by Cordell in 1574. The master of the rolls could appoint to the chief offices in Chancery (except the masterships), but the sparse evidence does not show whether or not Cordell sold them. He obtained one of the six clerkships for his brother Edward, and his income from fees and emoluments, estimated at over £1,000 by his successor, was supplemented by many perquisites and gifts. The manor of Fakenham, Suffolk, which he bought in 1580, was sold for £4,000 a few years after his death. He entertained the Queen lavishly at Long Melford in 1578. In a will he made on 1 Jan. 158l, he states that the revenue from Melford ‘is much more than ever any of my ancestors (to my understanding) ever had’. He drew up another testament on 18 Apr. following, making a number of bequests to the poor, including those at the hospital he had founded at Long Melford, and leaving £200 in plate and household stuff to his wife, together with her jewels and apparel. In the following month a codicil was added. He named as executors his sister Jane Alington and his ‘dear friend’, George Carey of Cockington. As overseers he appointed Sir Christopher Wray and Sir Gilbert Gerard—the latter his successor as master of the rolls. Cordell died at Rolls House on 17 May 1581, and was buried at Long Melford 19 June. He was a benefactor of the Merchant Taylors’ School, and first visitor of St. John’s College, Oxford. Attributed to him in the seventeenth century was the following:

There is no man that talks but I may gain by him, and none that holds his tongue but I may lose by him.

Perhaps a reason for Cordell’s survival was that he knew when to keep quiet.5