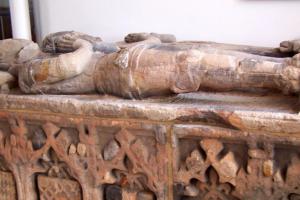 Christopher must still have been a comparatively young man when his father, Sir William, secured his election to the September Parliament of 1397 as one of the burgesses for Appleby. Sir William, a loyal adherent of Richard II, was himself returned as a shire knight for Westmorland, and clearly wished to marshal as much support as possible for the King in the Lower House. King Richard was, indeed, able to strike back at his former enemies, the Lords Appellant of 1388, in the Parliament, although before long he himself had been deposed by Henry of Bolingbroke, and the house of Lancaster was firmly in the ascendant. The political changes of 1399 had unfortunate consequences for the Curwens, because Henry Percy, earl of Northumberland, who had assisted Bolingbroke in his coup d’état, wished to exploit his position as feudal overlord of their manors of Workington, Seaton and Thornthwaite. Although he decided to moderate his initially aggressive conduct towards Sir William and his son by offering them patronage and a place in his retinue, the earl was still determined to secure a reversionary interest in the manors for himself and his heirs. Sir William had no alternative but to comply, although the agreement made by him, in May 1401, did at least provide Christopher with an annuity of £5 for life, with the promise of ten marks p.a. when he became a knight. In the event, the failure of the successive rebellions staged by the Percys against Henry IV freed Christopher from all further obligations, and he entered his inheritance, in 1403, without the fear that it might one day be claimed by his predatory neighbours. He had been knighted by June 1404, when he witnessed a deed for Sir Robert Muncaster*; and it was at about this time that one of his kinsmen confirmed his title to the manor of Thornthwaite. Not much evidence of his activities over the next few years has survived, although he evidently then struck up a friendship with the Cumbrian landowner, (Sir) John Skelton*, for whom he attested conveyances of property. His appearance, in 1410, with Sir John Lamplugh* as one of the arbitrators who were to decide the boundaries of the lordship of Frizington does, however, suggest that he occupied a position of some consequence in the local community.4

Sir Christopher was first elected to Parliament as a shire knight in the autumn of 1414, and began his administrative career as sheriff of Cumberland one year later. While in office he offered sureties of £200 on behalf of William Blenkinsop* in the court of Chancery. He enjoyed a reputation for prowess in the lists which earned him a place in the team of English knights led by John, Lord Clifford, against the Scots at Carlisle shortly afterwards. He took to the field in earnest in 1417 as a member of the retinue commanded by John, Lord Neville, in Henry V’s second expedition against the French. As the leader of a personal following of 44 lances and 113 archers, he was made keeper of the castle of Danville in Normandy, but his real reward came two years later, in February 1419, when he and his heirs male were granted the castle of Cany-en-Caux in perpetuity, along with the lordship of Caux, which had been confiscated from the duke of Bavaria. Sir Christopher made a brief visit to England in the following October, as he was then present among the witnesses to the baptism of (Sir) John Skelton’s grandson and namesake at Branthwaite in Cumberland, but he must have gone back to the theatre of war for at least a short while longer. He was probably still overseas when the two manors of Bampton Patrick and Bampton Skews in Westmorland came into his hands, perhaps in the right of his wife, Elizabeth Huddlestone. Later evidence refers to his continued presence in France during the reign of Henry VI, although his administrative responsibilities in England were such as to suggest that his service was in fact of limited duration.5

Sir Christopher attested his own return to the Parliament of 1423 and was actually made sheriff of Cumberland for a second time while the Commons were still in session. The same pattern of events, leading first to his presence at his own election as a shire knight and then to his almost immediate appointment as sheriff occurred in 1427; and he participated in the parliamentary elections of 1429 and 1435 as well. His decision not to put himself forward as a candidate in 1429 was probably influenced by problems arising from a dispute with Hugh Salkeld II* over the extension of his park at Thornthwaite, since the matter was then under arbitration and he clearly wished to remain at home while depositions were being taken from the parties involved. He and Salkeld had previously acted together as trustees of land in Lancashire, and thus contrived to settle their disagreement amicably enough. Sir Christopher was, therefore, again free to attend the Parliaments of 1431 and 1432, although from then onwards his horizons became more limited, and it was his elder son, Thomas, whom he helped to secure a seat in 1435. During his fourth term as sheriff of Cumberland, in May 1434, he took the general oath that he would not support anyone who disturbed the peace. He gave evidence at an inquisition post mortem held at Carlisle in the following January on the estates of Sir Peter Tilliol*, and, recognizing that his military career was now well behind him, he decided soon afterwards to farm out his possessions in France at a rent of 100 marks p.a. for the next seven years. By the terms of this contract, his second son, William, was to receive a separate annuity of 40 marks, direct from Cany-en-Caux. As a professional soldier who spent most of this period campaigning in Normandy, William clearly preferred such an arrangement. Meanwhile, the death in 1441 of his own younger brother, John, sometime governor of Porchester castle, may have strengthened Sir Christopher’s resolve to seek retirement, although he did serve a sixth term as sheriff in 1441, when he was already well advanced in years. By then he had settled a substantial part of his English estates upon his elder son, offering sureties worth no less than 1,000 marks to Sir John Pennington that Thomas would eventually succeed to all of them. Thomas had married Alice, the daughter of (Sir) Robert Lowther*; and it looks as if this undertaking, made in about 1443, marked the betrothal of their own young son, Christopher, to one of Pennington’s daughters.6

In December 1446, Sir Christopher was excused all further administrative responsibilities and appointments because of his ‘great age and services to Henry V and the King (Henry VI) in the wars in France and Normandy’, but he still continued to sit on the local bench and to serve on royal commissions for another two years. He died shortly before July 1450, and was buried at Workington parish church, under a fine tomb which depicted him in effigy wearing full armour and the ‘SS’ livery collar of the house of Lancaster. His widow, Elizabeth (who was eventually buried beside him), leased the manor of Thornthwaite and her other dower properties to her elder son for a rent of £20 a year and a promise of full board and lodging. She retained control of her own inheritance in Bampton Patrick until 1468, when she granted the annual revenues of £65 to William Curwen, one of her grandsons. Thomas Curwen pursued a similar career to that of his father, being active for many years in local administration.7