Home About the History of Parliament > Staff > Dr Philip Salmon 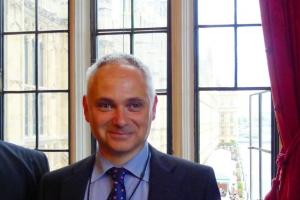 I joined the History of Parliament in 1997 after completing a doctorate and teaching at Oxford University. For the next eleven years I worked on the 1820-32 House of Commons volumes, which were published by Cambridge University Press in 2009. In 2009 I was appointed editor of the new 1832-1868 House of Commons project.

• The development of early democratic institutions (national, local and colonial) in Britain, Ireland and Australia, c.1800-1914; their practical workings and impact on the emergence of distinctive political identities; the related ideas, literature and historiography of electoral reform movements

• Elections and the role of the MP in Victorian politics; the cult of the public figure and the changing practices and functions of popular representation

• IT applications in history: quantification and digitisation; computer-based psephology; the impact of the web on political history

‘The parliamentary representation of Oxfordshire’, in An Historical Atlas of Oxfordshire, ed. K. Tiller and G. Darkes (Oxfordshire Record Society, 2010), 126-8

Ed., ‘England’s “other” ballot question: the unnoticed political revolution of 1835’, in Partisan Politics, Principle and Reform, 139-163

'John A. Phillips as a historian’, in Partisan Politics, Principle and Reform, pp. xxii-xxx

‘Electoral reform and the political modernization of England’, Parliaments, Estates, and Representation, xxiii (2003), 49-67